It Is Semi-Official, DuckTales 2017 Is Moving To The Disney Channel

Weekends are crazy for Disney Duck Nuts. We started the weekend excited that Frank Angones, Co-Producer of DuckTales 2017, would be sharing news sometime on Saturday. We were all rejoicing that the end of the hiatus had to be near, when DT17 fans on Reddit realized a promo animation on the Disney Now app suggested DT17 was moving to the Disney Channel and that it would be playing new episodes all month long. Then out of nowhere someone from the show tweeted the news that DT17 was moving to the Disney Channel! Then Frank brought us good/bad news that he couldn’t share with us this weekend, and the tweet declaring they had moved to TDC was gone…

We were excited that we may actually learn some of the big news this weekend. When will the show return? What channel will it be on? Will it move time slots? Will it be airing new episodes every day in May!? However, Frank was forced to call off the announcement because things changed and now he has bigger news to share “VEEEERRRRY” soon.

I’d like to add, that although I realize Frank was responding to everyone when he replied to our reply I’m just gonna pretend he was talking directly to us and fanboy for a bit… if that’s ok?

A friend of ours (@Kahuna_Potato) sent us a link on Rezd.tv’s Discord and sure enough the Disney Channel Calendar lists “The Spear of Selene!” on Friday, May 4th at 8:00 PM. 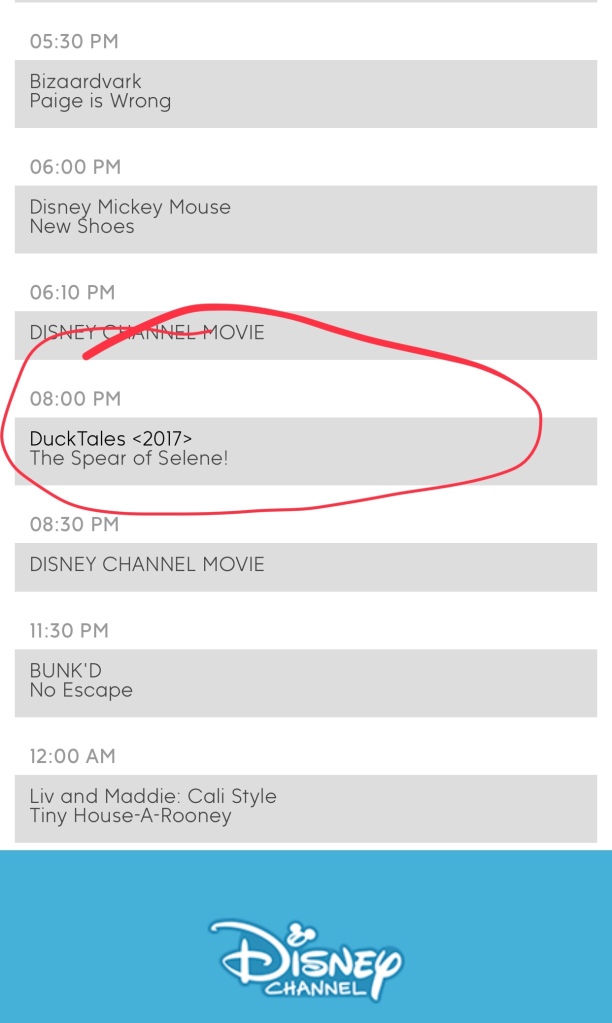 We trust Frank. We know he is a fan, and no one is more disappointed that he couldn’t share his news more than he is. I can’t wait for the news to officially break, but it does look like DuckTales 2017 is moving to prime time on the Disney Channel in May! Woo-oo!

What do you think? Are you anxious to see if Frank has any more news that what we already assume? What do you think about the show moving to the Disney Channel? How about that 8:00 PM time slot? Join the conversation below in the Comments or on Twitter (@DuckTalks).

Could DuckTales 2017 Be Moving To The Disney Channel?

DuckTales 2017 Coming To The Disney Channel Every Day In May!?