Why Bubba Duck Should Return

A few weeks ago Pirate offered our friend K.C. an opportunity to write a blog entry for our site about his DuckTales fandom. K.C. is a huge fan of Bubba the Cave Duck, and because of his fandom we’ve become more fond of the lil’ guy. We hope you enjoy K.C.’s blog entry!

Why Bubba Duck Should Return

DuckTales. One of my all-time favorite animated television shows from The Walt Disney Company. Now it’s been rebooted and back on television! Despite being born in 1994, I grew up watching the show alongside the rest of The Disney Afternoon’s lineup in reruns on Disney Channel and later on the now-defunct Toon Disney for much of my life, I felt the three characters introduced in the second season of the original series actually improved the show greatly. Those characters in question are Bubba the Cave Duck, his pet triceratops, Tootsie, and Fenton Crackshell (aka GizmoDuck). As Fenton/GizmoDuck is already slated to return in the new series, my main question is “will Bubba and Tootsie also be returning?” Bubba and Tootsie were the characters I admire the most from the original series and I still continue to admire them even in adulthood. Bubba and Tootsie were both introduced in the “Time is Money” five-parter which opened the second season of the original series as a cave duck and his pet triceratops from 1,000,000 BC that Scrooge took back to present day and adopted into the family. I always enjoyed the episodes featuring Bubba; probably even more than the episodes featuring GizmoDuck. I always get teary eyed at the conclusion of the “Time is Money” five parter as spoiler alert: Scrooge finally welcomes Bubba and Tootsie into the McDuck family and has a replica of their cave built in the backyard of McDuck Manor. The episode “Metal Attraction” was the only episode of the original series in which Bubba and GizmoDuck both appear, even if it’s only in the family photo seen below. It always makes me happy knowing that Bubba and GizmoDuck know of each other’s existence and that the writers cared enough to make an episode like this possible. I hope to see Bubba and GizmoDuck team up in the new series to fight crime together and maybe even see Bubba don the GizmoSuit! 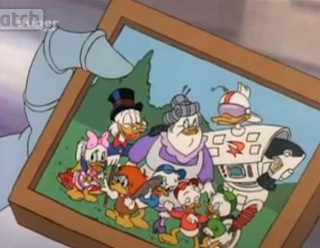 When the reboot series was announced in February, 2015, I was excited about seeing adventures with the McDuck family on television. Fast forward to two years later, and it was announced that Fenton/GizmoDuck is slated to return, I began to question if Bubba and Tootsie were to return as well. As I prepared to leave for Anaheim for the 2017 D23 Expo, I asked some of the passengers on board if they were not only DuckTales fans, but also fans of Bubba and Tootsie, most of them said yes. On top of all that, they also hoped that Bubba and Tootsie would return just as much I do. In fact, I came across several DuckTales fans at the expo and they had the same response. It’s nice to know I’m not alone and it was then that I realized that Bubba has an even bigger fanbase than I thought of! On top of all that, I’ve asked Bubba’s so-called “haters” to give him another chance, and they admit they like him better the second time around and even they want him and Tootsie to return too! One fan I’ve spoken to on Twitter says that Bubba and Tootsie are shown to be strong assets in Scrooge’s life, especially given the cave duck’s strong sense of smell and I couldn’t agree more. I’d even go as far to say that Tootsie makes a great pet! As I watch the new incarnation, I look for foreshadowing of Bubba and Tootsie’s debut. So far, I’ve found two. One was in the first short used to promote the series and the other was in the series’ debut episode, “Woo-oo!”, as seen in the photos provided. 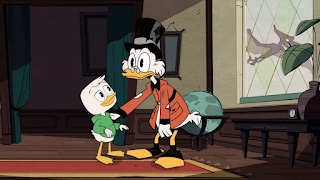 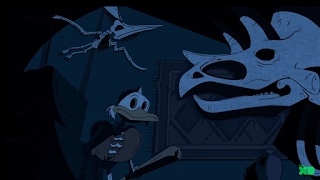 When I visited Mickey’s Very Merry Christmas Party at Disney World back in December of 2017, I approached Scrooge McDuck (or Uncle Scrooge, as I prefer to address him as) and asked him how the kids were doing (Bubba and Webby included). He “told” me they were doing well. Given Bubba’s prehistoric upbringing, I wonder how well he and Tootsie have been able to adapt to modern society. Then again, I wonder how well Bubba and Tootsie have adapted to our modern world.When I think about him, I have many questions such as, “What does Bubba want to dress up as for Halloween? What does he want for Christmas?, and what’s a typical afternoon or weekend like for him?” and did Bubba and Tootsie eventually move into the mansion and sleep in the nephews’ bedroom? I know that Scrooge wouldn’t want to leave Bubba out in the cold, especially in the wintertime. He’d have to come inside where it’s nice and warm and be with his loving, adoptive family.

In conclusion, I feel that Bubba would make a great addition to the new series alongside his pet triceratops, Tootsie. They’d prove to be just as important assets in Scrooge’s life as they did in the original and it would their entire fanbase satisfied. We hope to see them both in the second season and hope they stick around for possible future seasons.

You can find K.C. On Twitter at @RobertKiddCarl and he would love to talk with you about Bubba, Tootsie, and Gizmoduck!