We are counting down the days until we get new DuckTales news. Well, I guess that is not entirely accurate because we don’t know when the information will be released. What we do know is that the Co-Producer of DuckTales, Frank Angones, has revealed on Tumblr that we should be getting more information soon. 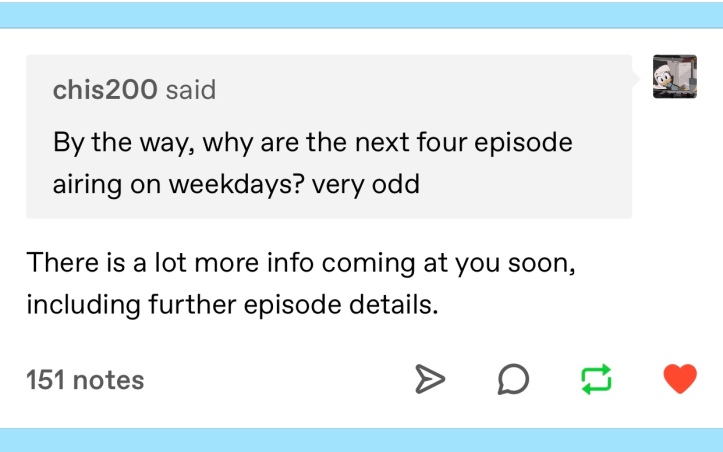 Until then you can bet we are keeping our ears perked and our eyes open. Our pal Emily OzQuack shared some new episode descriptions on our Discord this afternoon, and we think you all will like to see what she shared! These are episode descriptions and air dates for episodes 10 and 11 from Google.

Stuck as a shadow, Lena tries to protect Webby from her suspicious new friend Violet during a supernatural sleepover.

We’ve known about this episode the longest of the post-hiatus season 2 episodes, but it was pushed back for reasons that we may know later. The episode description sheds light on what is going on with Webby and the ghostly figures we’ve seen carrying her down the halls of McDuck Manor, and to the fact that Lena has been aware of what’s going on as she is stuck in Webby’s shadow.

I am exceptionally excited to see the return of Lena and can’t wait to meet this new friend of Webby’s. We are guessing it will be the small purple bird we saw at SDCC.

“The Dangerous Chemistry Of Gandra Dee!”

With Huey and Webby’s help, Fenton woos a punk rock scientist, only to uncover her dangerous plans for Gizmoduck.

Gandra Dee is a character whose name has been mentioned a time or two since the introduction of Fenton Crackshell-Cabrera. It’s nice to see that we get some Huey and Webby interaction as they help Fenton compete for the affections of Gandra Dee… but it looks like Ms. Dee could have an evil side.

We also want to point out that it looks like we may see episodes premiere on a Wednesday and Thursday on this week… these schedules are looney!

We do not have long to wait for more new DuckTales episodes. Let us know what you think about the episode descriptions below in the comments or on Twitter @DuckTalks

Check out these recent blogs!

Rumors of May DuckTales Episode Titles and Premiere Dates!

What the New Airing Order Could Mean for Lena