D23 Expo 2019 took place this weekend, and it filled our brains full of excitement for the future of the Walt Disney Company’s products…it was a Duck Blur!

Sunday’s main event panel was the much anticipated Disney Parks Panel. This panel previews what is to come in the next few years in the world of Disney Parks and Disney Cruise Line and more. The Disney Parks Blog has the full details of all of the announcements, so I recommend that after you finish this blog about the unexpected DuckTales announcement, you should check out their official coverage which includes concept art.

I wasn’t expecting to hear any DuckTales related news at the D23 Disney Parks Panel, but then Bob Chapek started to talk about the PLAY! pavilion.

The PLAY! pavilion will be part of a rethemed neighborhood area of Epcot called World Discovery.

The PLAY! pavilion will be between the Guardians of the Galaxy: Cosmic rewind coaster (which replaces Ellen’s Energy Adventure) and Mission Space. The PLAY! pavilion will be taking the place of a building called Wonders of Life which used to have classic attractions like Cranium Command, Body Wars, and the Making of Me film among other things. Most recently the Wonders of Life building has been used to house exhibits for Epcot’s many festivals.

Here is the Disney concept art for the outside of the PLAY! pavilion that was shown at the D23 Disney Parks panel. 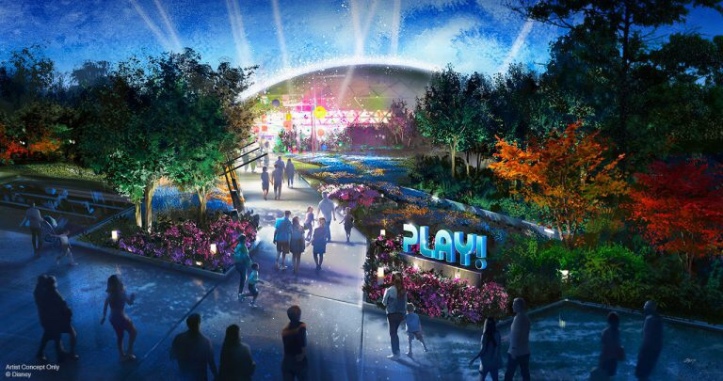 The PLAY! pavilion will be opened at Epcot in time for Walt Disney World’s 50th anniversary celebration which starts October 1st, 2021.

This will be a great area for adults and kids to unwind and play some virtual games featuring Disney characters. Some of the games that they showed featured Edna Mode and Wreck-it-Ralph. Then Bob Chapek said: “Make a splash in an epic water balloon fight hosted by our favorite Disney Ducks: Huey, Dewey, Louie, and Webby!”

My initial thoughts and reactions:

DuckTales in Epcot! Are you kidding me? This is awesome.

Huey, Dewey, Louie, and Webby are going to host the water balloon fight so they get to be center stage for this attraction.

Webby means this will definitely be DuckTales 2017 because that is definitely the most popular Webby version.

Then we saw the concept art: 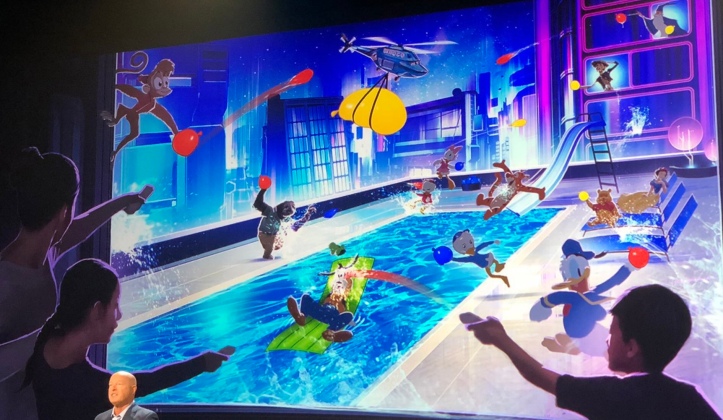 Zooming in on the concept art, we can see that the versions of the characters that they have in mind are from classic DuckTales 1987. This could always change from the concept art, and I also wonder if Russi Taylor voiced anything for this attraction before she passed away.

There are also a lot more Disney characters shown including Donald Duck, Goofy, Abu, Winnie the Pooh, Tigger, Flash, Dinoco Helicopter, Snow White, Merlin, and Hector Rivera. Louie was not on the concept art pic, but I am sure he will be there somewhere. The pic looks very interactive so more characters can appear than what was shown.

The balloon throwing action is controlled from what looks almost like a Wii controller. Also, I wonder if there will be a water effect to get the player slightly wet if they get hit by a balloon?

The PLAY! pavilion looks like a great addition to Epcot, and we don’t have to wait long to get to see it. We will also take any DuckTales representation in the Disney Theme Parks however we can get it. I imagine that I will be spending quite a while in this new pavilion as I wait impatiently for my Guardians of the Galaxy: Cosmic Rewind fastpass time slot.

What do you think of this new DuckTales addition to Epcot? Comment below or tweet us @DuckTalks.