Happy 87th Anniversary To The Goof!

Few animated characters are as recognizable as Goofy. Whether it’s from the classic cartoons or Mickey and the Roadster Racers generations have enjoyed the unique comedy of Goofy.

Personally, my favorite Goofy moments were from Goof Troop, A Goofy Movie, and those instructional shorts.

Today marks the 87th anniversary of the character. In 1937 Goofy debuted in the Mickey Mouse short Mickey’s Revue. In the short Mickey, Minnie, Pluto, and friends put on a show. During the show the audience keeps getting annoyed by the loud laughter of a familiar looking dog. That’s right, Goof- ugh… Dippy Dawg. At least that was his name in the beginning.

In his next appearance Dippy Dawg would appear younger and by his seventh appearance he had been renamed Goofy. The character has undergone many changes in appearance over the years. Some of the most drastic for any of the Sensational Six. Check out this video by Dave Lee Down Under to see the evolution of Goofy’s appearance; Evolution of Goofy Over 87 Years Explained

We also recommend that you watch our buddy Disney Dan’s video on the in park’s character design changes over the years; Evolution of Goofy In Disney Theme Parks!

If you love Goofy and would like to celebrate his Anniversary by buying yourself a present, you can join the Disney Movie Club and buy the Blu-ray release of A Goofy Movie or An Extremely Goofy Movie. Of course you can also buy these movies digitally through your favorite provider, or dig out your old DVD or VHS! 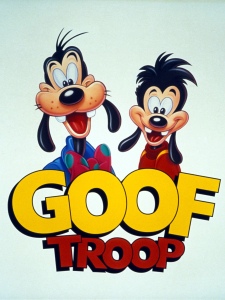 One of our favorite things to do is watch a few episodes of the 90s hit Goof Troop. I loved this version of the character as a child. Max was one of my favorite Disney characters. The show is still a lot of fun, and it’s soooooooooo 90s!

However you celebrate, make sure you use the phrase “Gawrsh!” A lot today!