Boom! Studios produced a series of Disney Afternoon comics several years ago. The buzz around these comics may have been the first indications to Disney that there was a market for Disney Afternoon products. I missed out on many of these stories, but thankfully IDW Publishing (one of the current Disney Comics License holders) has been re-publishing them under the double-sized title “Disney Afternoon Giant.”

Issue #4 comes out in April and it will conclude two four-part storylines from the DuckTales and Rescue Rangers comic books produced by Boom! studios. We’ve been curious what we would see the book move to next, and it looks like we now know!

A comic shop in Indiana tweeted an image of Disney Afternoon #5’s Previews’ listing and it includes Darkwing Duck!

The Darkwing Duck comic published by Boom! Studios catapulted Darkwing back into the forefront of our minds. The comic was some of the very best storylines produced for Disney Comics by Boom! Studios, and we are looking forward to seeing them on comic book shelves again!

“The Duck Knight Returns” is one of my favorite Darkwing stories. I own the Definitely Dangerous Edition, which is a DW omnibus of the Boom! Studios series, but I will be excited to read this comic when it comes out. If you own the DDE you may not know that when it was published by JoeBooks there were some changes made to the dialogue. I won’t get into the details of what happened, but the writer credited in Disney Afternoon Giant #5 is Ian Brill. I’m assuming that means the story will be the original dialogue published by Boom! Studios and not the dialogue written for the JoeBooks’ Edition which was written by Aaron Sparrow.

Additionally, this issue will continue republishing Rescue Rangers’ stories. The second storyline in the issue is listed as “Stranger Danger.” Although there was some controversy surrounding Boom! Studios’ Disney Afternoon comics, I have read almost unanimous praise for the Rescue Ranger stories. 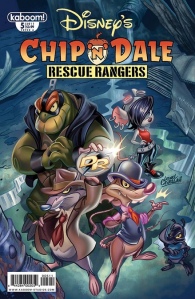 Darkwing Duck and Rescue Rangers stories in June’s Disney Afternoon Giant, What a time to be a fan of the DA! Hope you pick these up. And if you know a young reader consider picking up an extra copy for them. Maybe it leads to another life-long reader and Disney Afternoon Fan.