Disney Afternoon Giant #3 is out tomorrow, Wednesday February 13th, from IDW Publishing. IDW has been putting out this giant-sized comic book every other month. The series is currently in the third part of two previously released Disney Afternoon books published by Boom! Studios. The stories included in this issue are DuckTales: Rightful Owners Part 3: No Refunds, No Returns and Chip ‘n’ Dale: Rescue Rangers: Worldwide Rescue Part 3.

I missed out on these stories when they were first published by Boom! Studios. The Rescue Rangers specifically has me very excited for the book’s release every other month. Check out the description below, follow the next link to read a preview provided by IDW, and you can find my review of the issue a little further down.

For a longtime fan of the Disney Afternoon who missed out on the original printings of these comic books, this collection is something that I look forward to.

It’s another exciting installment of the classic DuckTales story, “Rightful Owners: No Refunds, No Returns”as Uncle Scrooge, Launchpad, Daisy Duck, and Huey, Dewey, and Louie continue their global adventure. Then, it’s Part 3 of “Worldwide Rescue”as Chip ‘n’ Dale and the Rescue Rangers race against the clock to figure out why the world’s animals have been acting so aggressive lately, and who—or what—is behind it all! 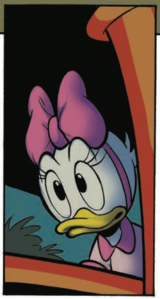 It is fun to return to the Duckburg of my youth. The story for Rightful Owners began very promising, and I was convinced that the story would be something epic. But… I feel that the story stalled a little with issues #2 and #3. In the opening it appeared that our characters would be trotting the globe, but in reality we only visited one location outside of Duckburg.

I’ve heard a lot of people point out that the characterizations were off for these stories, but I don’t feel that they were too far off. The one character that is noticeably different is Webby a Vanderquack… who honestly reminds me a little more of the new show’s Webby than the classic 1987 cartoon’s. Maybe that is why a I am more willing to see Webby as a confident and capable explorer over the character that I remember from my childhood. If you like Webby in the currently show on the Disney Channel you will like how she is portrayed in this comic.

The art in Rightful Owners is pretty inconsistent. I am assuming there were some deadline issues on this book. Some of the pages look great with detailed backgrounds, and others… just feels rushed. The art is honestly really good at times, it’s just inconsistent.

This book is why I am here. Seriously, it is worth the price of the double sized issue every other month. I’m not saying there is anything wrong with the DuckTales comic, I’m just saying this comic brings me a lot of joy.

The story behind Worldwide Rescue is not groundbreaking. There is some character development, but it has more to do with Monterrey Jack and Gadget’s relationship than anything else. The story does read like an episode of the show, but it also feels like the story is larger than the format allows. This issue isn’t impaired by flashbacks that make it jump around like past issues.

I will say that I felt the resolution to this issue’s tension left me scratching my head a little. It’s a nice message, but I’m not entirely sure how it resolved the problem. Of course we do not yet understand how the animal controlling machine works. I am sure my daughters will enjoy the story when they sit down to read it.

As for the art, it is everything that I could ever ask for from a Rescue Rangers comic book. I love the style of the art, the coloring, and even the motion of the characters on the page. I think the art in this book is some of the best I’ve seen the characters in. You really do need to pick up this comic just to stare at the art.

Check out our past blogs about Disney Afternoon Giant by following these links:

The Disney Afternoon Giant #1 May Be Reprinted Comics?!