Those Rumored Season 2 Episode Titles May Now Have Descriptions!

*Update! Someone in the comments pointed out that the episode titles and descriptions are listed on the site under the November 2018 Programming Highlights!

Last week we shared some DuckTales Season Two episode titles found online. Are These DuckTales Season 2 Episode Titles?! We discussed the titles on our last podcast and made sure to talk about them as rumors. DuckTalks Episode #045 – Surprise DuckTalks! Yesterday Tumblr user sophfandom53 shared images that appear to be from the Disney Press page. I’ve visited the webpage multiple times since last night, but the page does not include the information that is found on the Tumblr page.

The entries do in fact look like they came from Disney’s press site, and the descriptions could very well be legit. I would be surprised if these episode titles and descriptions turned out to be inaccurate. *They are! They are listed here DisneyABC Press November 2018 Programming Highlights

“The Ballad of Duke Baloney!”

After his disappearance, Glomgold resurfaces as anything but his ever-scheming self, while Webby and Louie try to uncover the truth behind who is Duke Baloney.

“The Town Where Everyone Was Nice!”

Donald reunites with his band, The Three Caballeros, while the family takes in the sites of a Brazilian town with a dark secret.

The last we saw Glomgold he was dropped into the harbor when his shadow took off to join Magica De Spell. There is a chance that he shows up in next week’s episode about Fethry… but maybe Glomgold hasn’t been seen since Magica’s attack on Duckburg. Read our last blog for more on the Duke of Baloney.

When we discussed the “The Town Where Everyone Was Nice!” I was stumped as to what the episode could be about. Some people online have guessed it would be the 3 Cabs episode. I wanted that to be true, but I couldn’t find a connection. One fan of the Cabs mentioned that it could be about Baia… (Have You Been To Baia, Donald?) 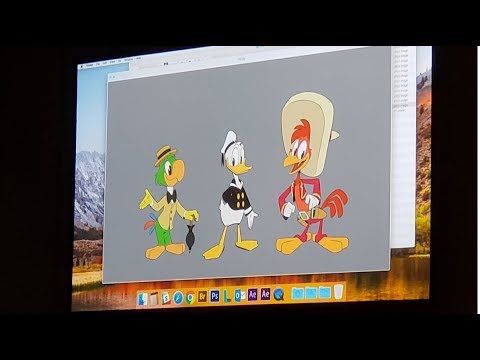 After watching the premiere for Season 2 the description for the Storkules episode makes a lot more sense. We know Season 2 will see a lot more Louie (assumed to be similar to how Season 1 focused more on Dewey). But Louie’s Monster Extermination business sounds like a great episode with or without Storkules!

What do you think? Do these episode titles and descriptions excite you? What are you most looking forward to next month? Join the conversation below or on Twitter @DuckTalks