Don Rosa Library Vol. 1: The Son of the Sun Review

Don Rosa’s Uncle Scrooge and Donald Duck comic stories are a treasure. His work is right up there next to the work of his idol Carl Barks. Uncle Scrooge and Donald Duck comic are some of the best known and best selling comics worldwide, but they are not as well known in the United States. Don won the Eisner Award in 1995 for his serialized story The Life and Times of Scrooge McDuck. Don Rosa is the David Hasselhoff of Finland. 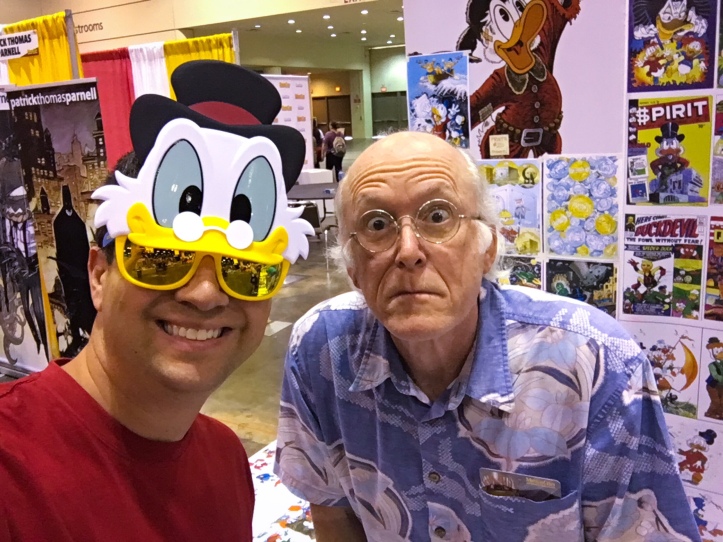 I did not know any of that information above when I first met Don at a comic convention a few months ago. All I knew was that he worked on Uncle Scrooge and Donald Duck comics, and he had some amazing prints of all of my favorite ducks at his booth at the convention. After seeing some of his work, I became obsessed and decided to check out The Life and Times of Scrooge McDuck at my local library. All of the rumors were true, it was the best comic work that I have ever read. I found out that a documentary about the underrated Don Rosa, called the Scrooge Mystery, was releasing in October. After interviewing the director of that documentary, I was inspired to read ALL of the Don Rosa Disney Duck stories. Not only that, but being a part of a Disney Duck blog and podcast, it was my duty to go through a complete history lesson on Disney Duck comics. I wanted to educate myself on all of the duck comics to not only improve my knowledge base for our blog and podcast, but I wanted to earn my Ducktorate Degree in duck comics. I made the Ducktorate Degree up, but I want to be an expert and master on all of the characters and stories that make up the Disney Duck comics.

That is where one of the friends of our show, Fantagraphics, comes in. Fantagraphics is a publishing company that has a couple of book collections that would entertain any Disney Duck fan. The three that we are reading through are: Disney Masters, Carl Barks Library, and Don Rosa Library.

Fantagraphics debuted the first volume of the Don Rosa Library, The Son of the Sun, in 2014. Since then, they have released two volumes each year. In November 2018, the tenth and final volume, The Old Castle’s Other Secret, will be released. The library collection will contain the complete chronological collection of all of his Uncle Scrooge and Donald Duck stories. There were a total of 88 stories by Don between 1987 and 2006. 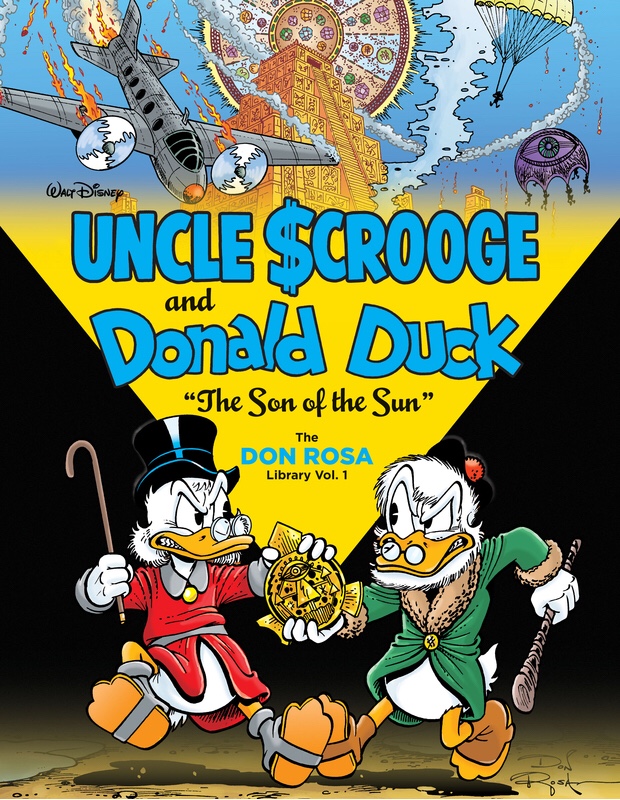 The Son of the Sun

The title and cover art from Don Rosa Library Vol. 1 comes from Don’s very first Uncle Scrooge comic story, The Son of the Sun. Glomgold is one of my favorite characters so it is great to see him front and center on this cover and in that story. We will go through the individual stories later on in this review.

Don Rosa Library Vol. 1 is 208 pages, and it includes stories published in 1987 and 1988. The majority of the pages are the stories, but there are also some supplement sections with a biography about Don’s life as well as behind the scenes pictures and stories about each and every story that is included in this edition. It is like bonus features on a blu-ray, and it is full of great and interesting information. I am glad that it is included in this volume and every volume of the Don Rosa Library.

There are 13 Disney Duck stories included in the Don Rosa Library Vol. 1:

The Son of the Sun, Cash Flow, and Last Sled to Dawson are the longer stories in this batch.

Here are some quick notes on each story:

Don’s first duck story, The Son of the Sun, is a masterpiece. I could see why this was the start of a long career of doing what he was born to do. This story is a treasure search adventure of Uncle Scrooge, Donald Duck, Huey, Dewey, and Louie vs. Glomgold. I loved this one so much that I was inspired to buy one of the original comics on eBay. #TeamGlomgold 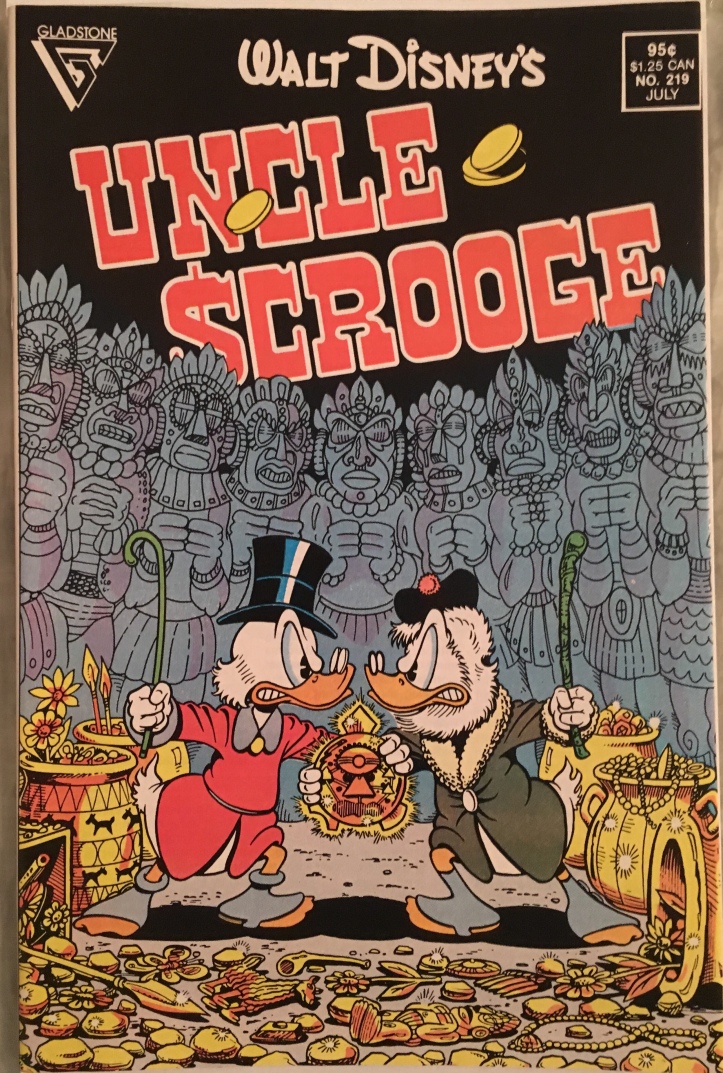 Nobody’s Business is a Donald Duck vs. Gladstone story. The last comic pane of this story is a funny joke about the original comic publisher, Gladstone Publishing.

Mythological Menagerie is a story about Huey, Dewey, and Louie spotting animals in a forest to earn a Jr. Woodchuck badge. Donald Duck either makes it easy or hard for them…

Recalled Wreck is a funny but tragic story about Donald Duck’s car.

Cash Flow is a Scrooge McDuck vs. The Beagle Boys story that involves physics.

Fit to be pied is a Halloween themed Donald Duck story. Pumpkin carving contest between Donald and his neighbor. The neighbor has big pumpkins and Donald can carve pumpkins. Who will win? I am a sucker for holiday stories and Halloween is one of my favorite holidays. Loved this story!

Fir-Tree Fracas is a short Donald Duck Christmas story that kind of reminded me of Donald as Clark Griswold from National Lampoon’s Christmas Vacation.

The Paper Chase is a short story about Scrooge McDuck catching up with the morning paper.

Last Sled to Dawson is a return to the place where Scrooge McDuck started to make his fortune. This story feels like it could be a bonus sequel story in The Life and Times of Scrooge McDuck. Goldie makes an appearance in this story.

Rocket Reverie is a short story about Donald Duck running out of gas in space.

Fiscal Fitness is a short story about Scrooge McDuck training for the Millionaire Olympics.

Metaphorically Speaking is a story about the nephews playing hookey from school, and unfortunately for them they keep running into their Uncle Donald wherever they go.

This collection of stories is fantastic. I love Fantagraphics for putting this library together. It is great to read through Don Rosa’s stories in chronological order and all in one place. It would take a lot of time and money to compile a comic collection that included all of these stories. Anything that takes a lot of time and money would not be approved by Scrooge McDuck.

The bonus content on Don Rosa’s life and the behind the scene content on each story really completes this volume for a comprehensive experience of his first 13 Disney Duck stories. I can’t wait to read through the rest of the volumes in the Don Rosa Library.

Don Rosa Library Vol. 1: The Son of the Sun