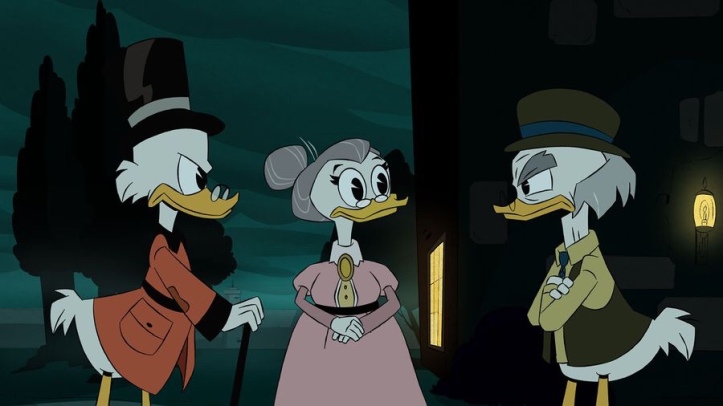 Who is Fergus McDuck? 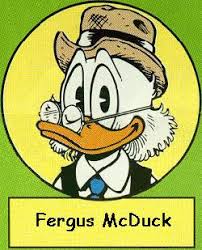 Fergus McDuck is Scrooge McDuck’s father and Donald Duck’s grandfather. He was originally created by Carl Barks in the 1950s on the Duck family tree. He was given the name Old “Scotty” McDuck.

In the 1960’s, Fergus appeared in daily comic strip by Bob Karp and Al Taliaferro. Scrooge refers to his father “a lazy spendthrift who married a rich widow”. Fergus didn’t trust banks and often would bury money in the ground or hide it inside items to protect it. In one comic, Scrooge is showing off an antique chair from the family which his father personally reupholstered. When the chair accidentally breaks it is revealed it had cash hidden inside. 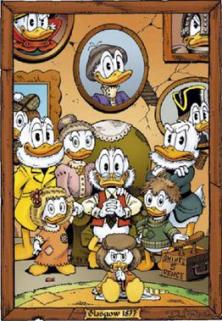 In the 1970’s, Scrooge’s parents made there first appearance in a flashback in the comic “Uncle Scrooge and the Gold of the Klondike” by Romano Scarpa. His father was a shopkeeper who sells prospector equipment in the Klondike and stores his money in the stove. Scrooge’s mother is introduced in the Italian comic as Oretta Paporetta (later named Downy O’Drake) who had been dating for many years. The two had not marry yet because they were both too cheap to pay the marriage fee. The story covers their eventual marriage and the birth of Scrooge McDuck.

Fergus gets his official name from “The Life and Times of Scrooge McDuck” by Don Rosa. This comic follows flashbacks of Scrooge Mcduck when he was young living with his family in Glasgow. The family is poor and encourages Scrooge to make his own money for the family. 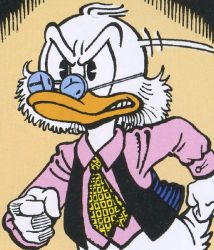 Fergus makes several appearances in Uncle Scrooge comics.  In “The New Laird of Castle McDuck” (Uncle Scrooge #289), Scrooge returns home to help keep his family’s land from being taken away because his father was unable to pay his taxes. Scrooge was able to use all his money earned to pay the taxes and become the new owner of the land.

In “The Billionaire of Dismal Downs” (Uncle Scrooge #293), Scrooge strikes it rich in the Klondike and returns to Scotland. He wants to move his family to Duckburg but Fergus refuses to leave and he stays in Scotland. Scrooge decides to move along with his sisters Matilda McDuck, and Hortense McDuck to Duckburg leaving his parents behind.

In “A Letter from Home” (Uncle Scrooge #342), Fergus tried to find the Knight Templar treasure hidden in the castle McDuck by one of his ancestors. Fergus decided not to tell Scrooge about the treasure, because that Scrooge would feel better building his own fortune instead of inheriting one. 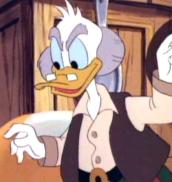 Fergus makes an appearance as a poor farmer who raised Scrooge to earn his number on dime in the Original Ducktales Episode, “Once Upon a Dime”. Scrooge refers to Fergus as McPapa and stated they both played the bagpipes. His parents are also  referred to in the episode, “The Curse of Castle McDuck”, when Scrooge returns to his childhood home to reclaim Castle McDuck. 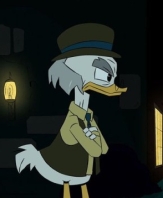 In Ducktales 2017, Fergus is set to make his first actual appearance in “The Secret(s) of Castle McDuck!”. In the promotional pictures he seems to be at odds with Scrooge McDuck. Perhaps its because he took the family away from Scotland as a reference to the comics. We can’t wait to learn more about his character! 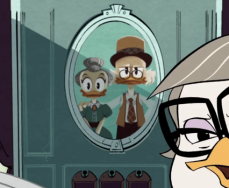 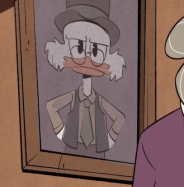 Fergus makes a brief appearance in the first episode “Woo-oo!”. You can see their painting on the wall when Scrooge is trying to read his paper. Also while Scrooge and Mrs. Beakley are walking down the hall his picture appears on the wall.

“The Secret(s) of Castle McDuck!” 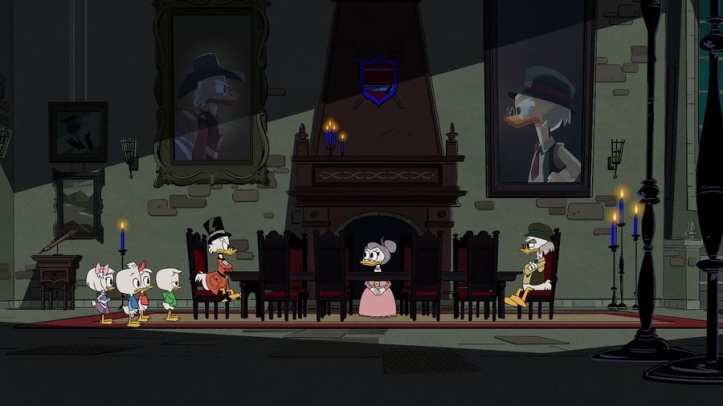