Spying on “From the Confidential Case Files of Agent 22!”

I’ve always loved spies. It’s one of the many elements that I enjoyed in Darkwing Duck… and now that I am thinking about it DW may be one of the reasons why I love spies so much.

I remember watching Get Smart on Nick at Night. I loved the laughs and the gags in that show, but I also enjoyed the story of two spy factions one trying to take over the world and one trying to stop them.

And at some point as I entered adolescence (maybe just a little before) my dad introduced me to 007 himself; Bond, James Bond. Sean Connery, Roger Moore, and Timothy Dalton starred in some of my favorite movies growing up. Bond’s world of espionage and fantastic gadgets captivated my imagination, and of course I enjoyed the later Brosnan and Craig movies.

My favorite live-action television show is the show that aired for five seasons on NBC, Chuck…. anyway… I like spy stuff. So of course the latest episode of DuckTales, titled “From the Confidential Case Files of Agent 22!” has quickly become one of my favorites.

I thought it would be fun to put together a blog including the many spy references that I caught while watching this week’s episode.

The Man With The Golden Everything

In this episode not only is it confirmed that Mrs. Beakley was a spy, but we also learn that her alias is/was Agent 22. Most spy characters operate under an alias. James Bond is 007, Chuck Bartowski went by the alias Charles Carmichael, and Maxwell Smart’s was Agent 86. Agent 86’s partner was Agent 99, and I think that was the inspiration behind Mrs. Beakley’s spy alias.

Mrs. Beakley’s look in the flashbacks are also inspired by spy based entertainment. Frank Angones said on Tumblr that Mrs. Beakley’s design was influenced by the Mrs. Peel from the British espionage show The Avengers. I think Scrooge may have also benefited from some influence from this classic show.

In a flashback we find out that Mrs. Beakley and Scrooge were agents of S.H.U.S.H. We find out that in this version S.H.U.S.H. was led by Ludwig Von Drake. S.H.U.S.H. is most commonly known as the international peacekeeping organization that Darkwing Duck worked with from time to time. S.H.U.S.H. could be compared to Marvel’s peacekeeping organization known as S.H.I.E.L.D. (see what they did there?). In Darkwing Duck, S.H.U.S.H. was lead by the director J. Gander Hooter (you know, like J. Edgar Hoover the head of the FBI) and his second in command Vladmir Grizlikoff. In DW the agencies headquarters was located in St. Canard.

We’ve already seen hints of S.H.U.S.H. before this episode aired. In the episode “Beware of the B.U.D.D.Y. System!” a billboard on a familiar looking building includes Grizlikoff and it says S.H.U.S.H. When we first see Scrooge McDuck in the flashback scene of Agent 22 and Von Drake he is introduced as McDuck, Scrooge McDuck. This is the well-known introduction of 007. Whenever James Bond introduces himself he always says, “Bond, James Bond.”

When we are introduced to Scrooge in the flashback he says he just finished a case where he caught the villain Jack the Tripper. It may be obvious that Jack the Tripper is meant to make everyone think of the t London serial killer, Jack the Ripper (whose murders were never solved). But what some DuckFans may not know is that there was in fact a DuckTales villain known as Jack the Tripper in the episode “Dr. Jekyll and Mr. McDuck”. 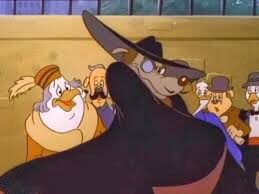 when Director Von Drake presents Agent McDuck with his new spy-cane he declares it to be the Von Drake Action Cane PPK. We know the cane is a reference to Scrooge’s pogo-cane in the classic NES game, but it’s name also has a spy connection. James Bond’s weapon of choice is the Walther PPK. The Walther PPK is a semi-automatic pistol that 007 always had ready to take on any spy that crossed him.

Spies carry all kinds of fantastic gadgets, and before we had GPS they were catching the villains with tracking devices. It was great to see that Mrs. Beakley’s Pendant doubles as a tracking device.

One thing has always been true of spy villains, they have the best lairs. They are commonly found in exotic locations and display far-out architecture. Of course Black Heron would have her cool lair on a cool island.

A great villain can’t go out in their first appearance!  Black Heron’s ambiguous end in this episode leaves us to believe that she may have fallen to her doom… but if there isn’t a body… 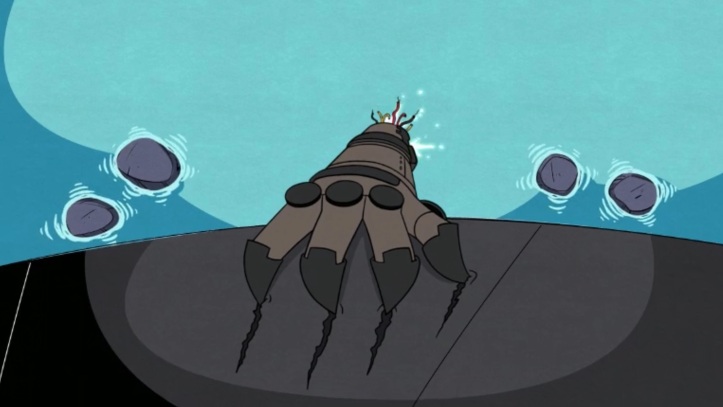 This episode has taken my favorite spot. I love all of these spy references. What did you think of the episode? Did you notice something I missed? Join the conversation below or on Twitter @DuckTalks