One thousand years ago, superstition and
the sword ruled.
It was a time of darkness, it was
a world of fear,
It was the age of Gargoyles.

Stone by day, warriors by night.
We were betrayed by the humans we had
sworn to protect.
Frozen in stone by magic spell for
a thousand years.
Now here in Manhattan…
The spell is broken…
and we live again!

We are defenders of the night.
We are Gargoyles!

What a great time to be a Gargoyles fan!

The DuckTales (2017) series finale episode, “The Last Adventure!”, featured a long awaited Gargoyles cameo. Manny the Headless Man-Horse was revealed to be “The Headless Horseman of the Apocalypse.” He is later giving the ability to speak, and the character is voiced by Keith David who provided his voice talents for Goliath in Gargoyles. Manny later sprouts a head and wings with the Gargoyles theme playing in the background, and he shouts “I live again…again.” I geeked out pretty hard on this cameo in DuckTales (2017).

If you have not been introduced to the 90s phenomenon that is Gargoyles, you can take care of that challenge on Disney+. All 78 episodes are available to stream and binge watch on Disney+. Become one of us.

Gargoyles is definitely high on the list of shows that is worthy of a continuation or a reboot. Until that happens though, there are some amazing Gargoyles collectibles and products that are being released this year that are like love letters to this dedicated fan base.

QMx will be releasing the first two Gargoyles Q-figs in a new series devoted to the characters of Gargoyles. The series will debut with Goliath and Demona this summer. I can’t wait for this series, and I may need to build a new castle for all of the exciting characters and figures to come from this product line. 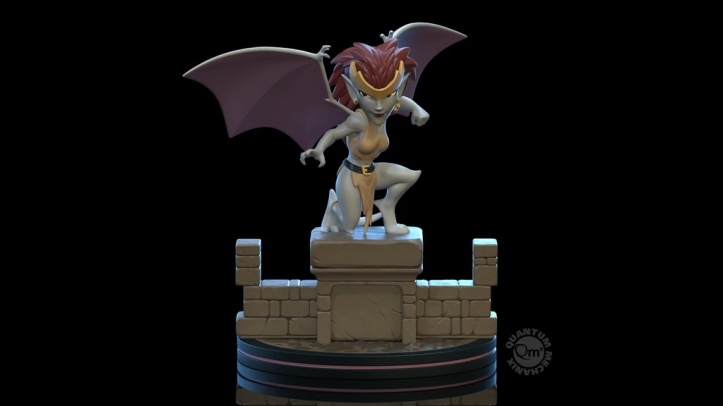 Ravensburger, the makers of the popular fan favorite board game, Disney Villainous, will be releasing a Gargoyles themed board game in August. The game will be titled Gargoyles: Awakening, and it will be available at Target. We will definitely update this blog with an order link when it is available.

Check out the fun game tokens. You can play as Broadway, Elisa, Goliath, Lexington, Hudson, and Brooklyn as you battle Xanatos and Demona.

NECA has revealed that it has the Gargoyles license by releasing pics of a Goliath figure on social media. The release should include an alternate head sculpt as we see an angry and friendly Goliath in the pics below.

Wow! This figure is breathtaking. Can a Gargoyle be breathtaking? Apparently so, since I typed it. NECA absolutely nails it with each franchise that it gets it’s hands on. Kenner produced the original line of Gargoyles figures which were released in the 90s. This Goliath figure by NECA is beyond next level. Hopefully, Goliath is only a teaser for an entire line of Gargoyles figures as this show was full of amazingly designed characters.

Gargoyles fans…we live again and definitely have a lot to look forward to!

Let us know what you think about all of this epic Gargoyles merch in the comments below or tweet us @DuckTalks.