Herocross is a Hong Kong based toy and collectibles company that makes high quality figures of all of the best franchises. I became a super fan of their products ever since I first saw their HMF (Hybrid Metal Figuration) series of articulated Disney duck characters. In the HMF series, they have released figures of Donald Duck, Daisy Duck, Scrooge McDuck, Huey, Dewey, Louie, and Webby Vanderquack.

Another popular new product line by Herocross is their Hoopy series. This new 6-inch PVC collection launched last year with many classic Disney characters in series 1 including Mickey Mouse, Minnie Mouse, Donald Duck, Daisy Duck, Scrooge McDuck, Huey, Dewey, Louie, Winnie the Pooh, Piglet, Eeyore, Tigger, and the cast of Toy Story. The series is called Hoopy because each figure comes with a uniquely colored hula hoop that the figures can hold in their hands.

Our friends at Herocross sent over a couple of their Hoopy figures for us to get a better look at and feature on the blog. Today, we will be taking a look at Donald Duck and Daisy Duck.

Each Hoopy figure comes in a colorful display box with a window showcasing the figure. This definitely gives you the option to display in box if that is your preference. 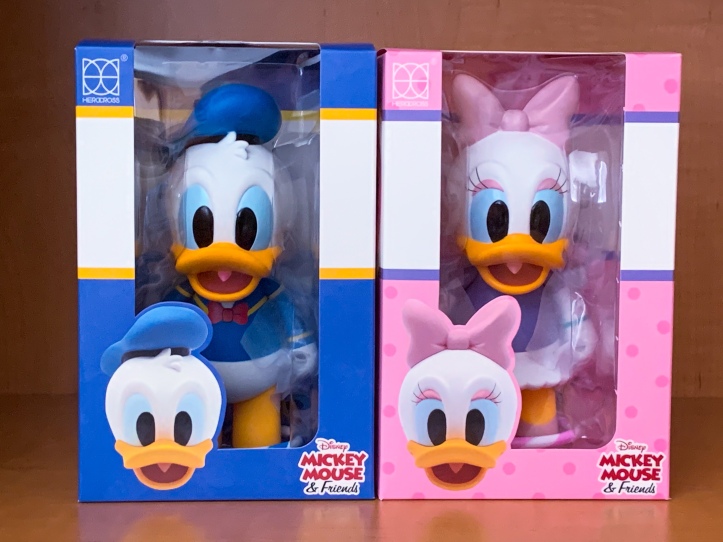 Each Hoopy figure has a nice detailed sculpt and colorful paint job. The figure series is 6 inch scale, but Donald and Daisy are close to 7 inches with their hat and bow. These ducks are adorable and great looking figures. 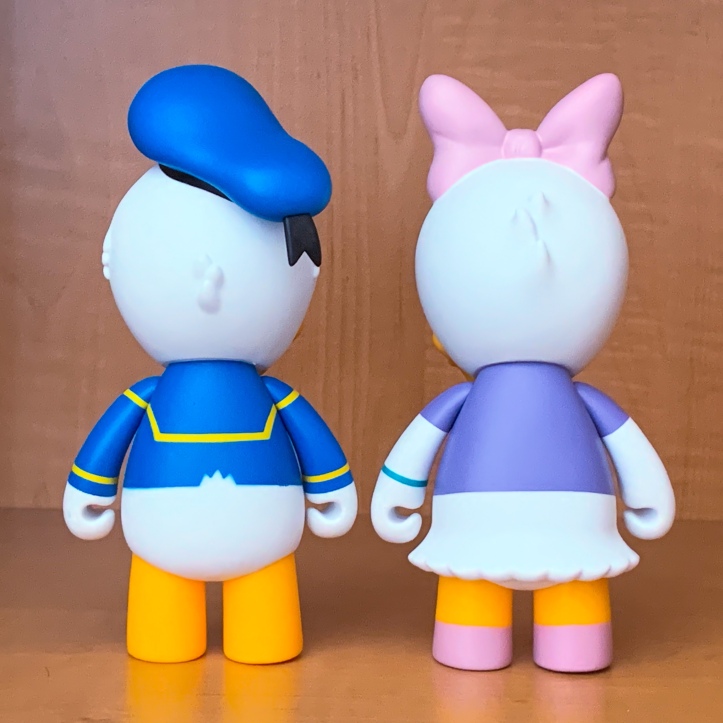 The figure’s head, arms, and legs are posable which lead to more display options rather than keeping the figure in a static pose.

Here are Donald and Daisy with their hula hoops. Each hula hoop fits securely in the figure’s hands. It is recommended to soften the hands of the characters before placing the hula hoops in their hands. Instructions for softening the hands are included in the box.

Each Hoopy figure also comes with a collectible sticker.

Herocross also sells a special edition of Donald Duck, Daisy Duck, Mickey Mouse, and Minnie Mouse in a variant color scheme since those four characters were among the first to debut in their Hoopy figure series.

These Hoopy figures retail at $13.50 USD and can be ordered directly from Herocross’ website at the link below:

Herocross’ new Hoopy series is a lot of fun, and they look great on a shelf. I am happy to see Donald, Daisy, Scrooge, Huey, Dewey, and Louie included in the first wave of figures. I really like that their head, arms, and legs move for more display possibilities.

Thanks again to Herocross for letting me showcase the Donald and Daisy Duck Hoopy series figures on the blog! 

Let us know what you think about the Herocross Donald Duck and Daisy Duck Hoopy figures in the comments below or tweet us @DuckTalks.