The Nightmare Before Christmas is more than just a movie. It is an entire mood. The movie is a holiday masterpiece that can be watched and celebrated all year long. With great movies comes great toys and collectibles.

Diamond Select Toys has been knocking it dead with their line of Nightmare Before Christmas Select action figures. The most recent release in this collection is series 9 which consists of three figure packs: Jimi, Jimmy and James, Snowmobile Jack. Each figure pack comes with a piece for you to build a snow mobile.

I watch Nightmare Before Christmas several times a year, and I never knew the zombie band of Halloweentown had official names. Their names are Jimi, Jimmy, and James. 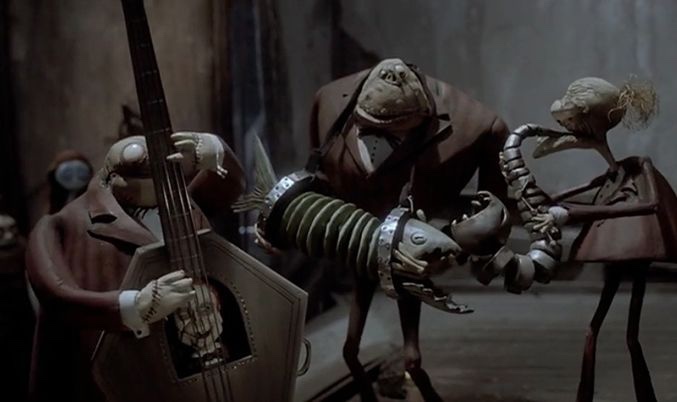 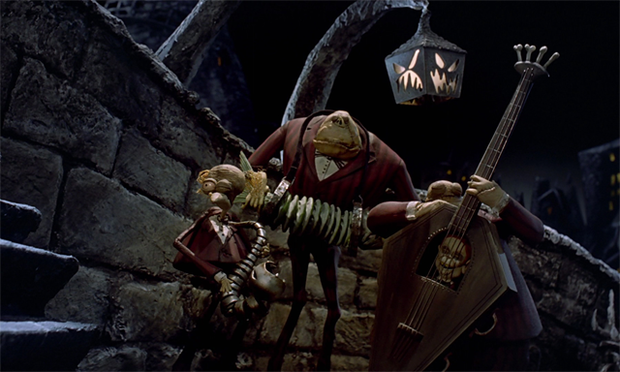 That is what I love most about this Diamond Select Toys Nightmare Before Christmas figure line. Even the memorable secondary characters from the movie are getting figures in this epic collection. The third figure pack is a unique Jack Skellington figure that we will take a look at in a future blog.

Today we will be taking a closer look at two of the figure packs from series 9 that make up the trio of the Halloweentown zombie band. A monster thank you to Diamond Select Toys for sending us these fantastic figures to showcase on the blog!

Each figure pack comes in a window package which displays the figure, accessories, and part of Jack Skellington‘s snow mobile. The window packaging leaves collectors the option of displaying the figures in box if you are an in box action figure collector.

The box side view shows a glam shot of the figures. 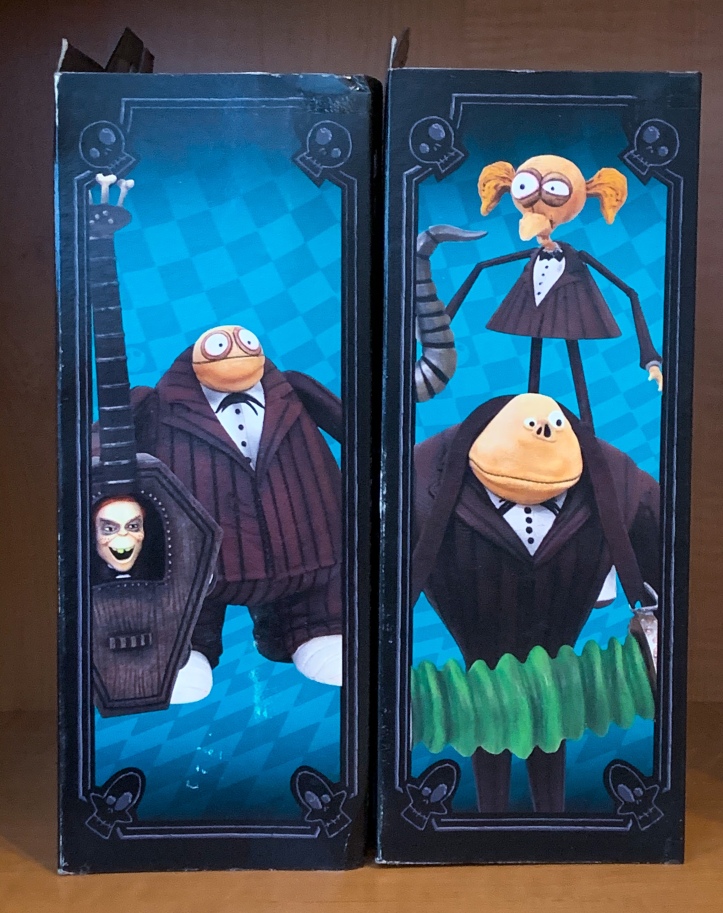 The back of the box shows all of the figures that are included in Series 9. 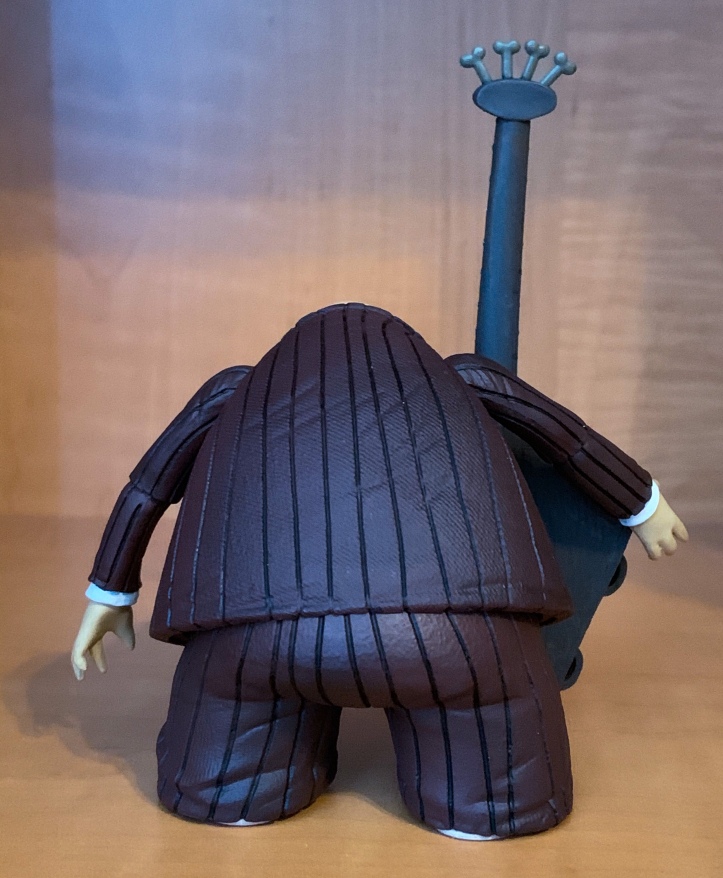 Jimi’s accessory is of course his spooky bass guitar. It is a very detailed sculpted accessory, but it is missing it’s strings. Without the strings you get a better look at the ventriloquist dummy’s face of the guitar.

The piece of Jack’s Snowmobile that comes in Jimi’s figure pack is the sack of Christmastown items.

“Nice work, bone daddy.” James is the zombie band’s saxophone player and Jimmy plays the accordion. Both figures have thirteen points of articulation: head, shoulders (2), elbows (2), wrists (2), legs (2), knees (2), feet (2). They both come with stands which I recommend using to help with the weight distribution as both of these figures have very thin legs. 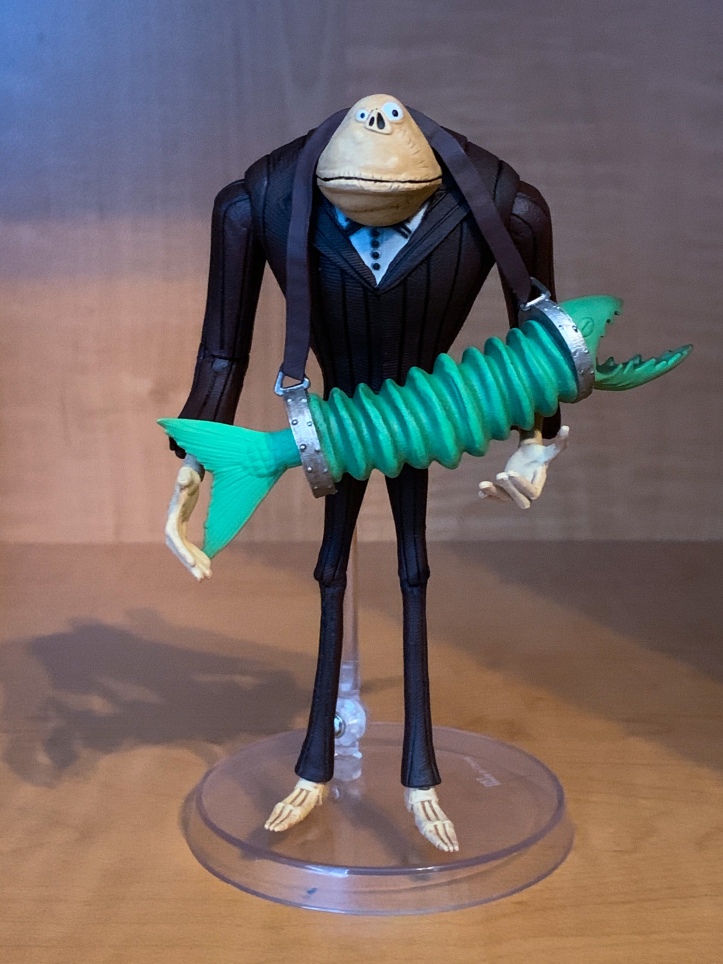 Each figure comes with their respective band accessories. I had a hard time getting Jimmy to hold his saxophone. I wrapped the saxophone around his neck. The piece of Jack’s Snowmobile that comes with this figure pack is the sled.

Jack’s sack of Christmastown items from the Jimi figure pack fits perfectly on top of the sled.

It is great that the zombie band from Halloweentown is rising from the dead and joining the fantastic line of action figures in the Diamond Select Toys Nightmare Before Christmas Select figure set. You will need to buy both figure packs to get the zombie band trio. The figures are very detailed, and they would make a hauntingly musical edition to your Nightmare Before Christmas figure collection. These figures would look great in your Halloween, Christmas, or every day display.