Fantagraphics launched the Disney Masters Series with Vol. 1: The Delta Dimension in May 2018. Since then they have published a few new volumes in the Disney Masters series each year. Volumes have been alternating between the central character and story being Mickey Mouse related or Donald Duck/Uncle Scrooge.

Fantagraphics presents Disney Masters – acclaimed artists from around the world working in the grand Walt Disney tradition. Many of these stories are new to American readers and appear here for the first time in English. Fresh new artwork, fresh new adventures, and fresh new laughs! 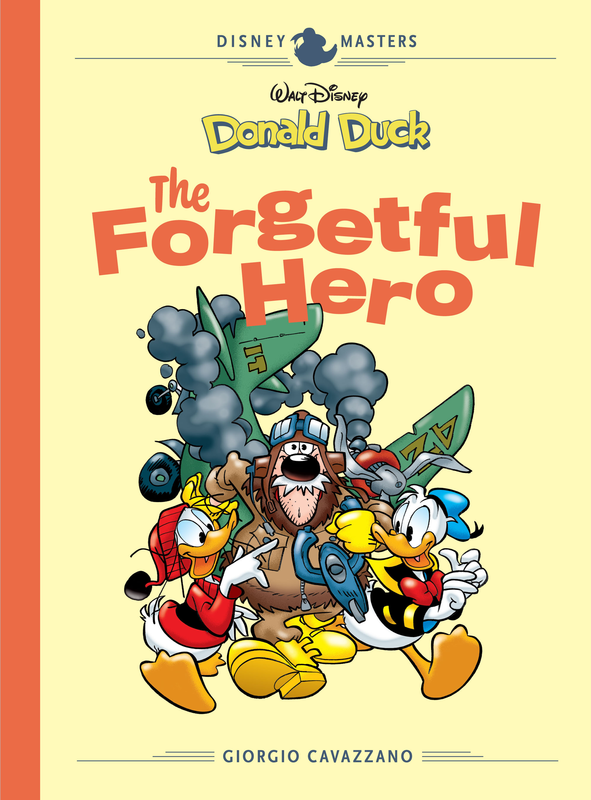 Donald Duck and Uncle Scrooge shrink down to the size of germs, Daisy Duck goes on a super-secret mission, and Mickey goes noir in the collection of comics starring the universally beloved characters.

Uncle Scrooge wants to publish a historic tell-all interview with World War I flying ace Eddie Brickenbatter. But the legendary hero has amnesia ― so to cure it, Scrooge tells Donald Duck to reenact the plane crash that caused Brickenbatter to lose his memory in the first place! Then, in “Plantastic Voyage,” Donald and Scrooge shrink down to the size of germs on a leaf. And Daisy Duck embarks on a super-secret mission in “The Dazzling Duck She-Venger.” Finally, Mickey Mouse, on the trail of a missing man, finds himself in a twisting mystery of film noir thrills and chills in “The Case of the Cut-Off Calls!” Full-color illustrations throughout.

Disney Masters Vol. 12: Donald Duck: The Forgetful Hero will be released by Fantagraphics on 10/20/20.

This edition of the Disney Masters series is 200 pages, and it includes stories that were originally published in Italy and appear in English for the first time in this book. This volume’s featured Disney Master is artist, Giorgio Cavazzano.

A short biography on Giorgio Cavazzano is included at the back of this volume.

Disney Masters Vol. 12: The Forgetful Hero is available in hardcover and Kindle\Comixology versions. A link to buy this book can be found at the end of this review.

The next four volumes in the Disney Masters series have already been announced and are available for preorder:

There are 4 stories included in Disney Masters Vol. 12:

Scrooge is in search of a critical enzyme that could be used by Gyro Gearloose to recreate the process of photosynthesis in the Plantastic Voyage. In an effort to find the enzyme, Gyro uses his shrinking machine to shrink Scrooge, Donald, Huey, Dewey, and Louie so that they can pilot a mini sub into the internal structure of the leaf. A lot of fun facts on the plant life cycle fill up the pages of this story that teaches Scrooge the lesson that taking care of plant life might just be more important than earning a quick buck.

Daisy Duck gets a super secret identity in The Dazzling Duck She-Venger. Donald Duck had been the Duck Avenger for a few years and now Daisy has the opportunity to show that she is pretty super as well as she has to save Donald from some bad people trying to steal maps to get around Scrooge’s security system for his money bin. I love the Duck Avenger stories so seeing Daisy get her own super hero origin story as the Dazzling Duck She-Venger was a real treat.

Mickey Mouse is a freelance detective trying to solve a kidnapping case in The Case of the Cut-Off Calls. On a stormy night at 12:20am, phones all over Mouseton started to ring. Mickey’s phone answering machine recorded the call which scarily reported a kidnapping and request for help. The police thing it was a prank, but Mickey is determined to solve the case. Remember phone answering machines? Those were fun.

Scrooge McDuck is not able to sleep at night knowing that one of his rivals, John D. Rockerduck, is outselling him in the book business in the biography publishing category. Donald and Fethry team up to find someone interesting to write about that will help Scrooge defeat Rockerduck. When all hope seems to be lost, they find The Forgetful Hero. Eddie Brickenbatter was a World War I pilot who lost his memory after crashing his plane into a battleship and sinking it. The doctor’s prescription for returning his memory is to recreate the event.

I can definitely tell why Disney comics are so popular and well known in Italy if this is the type of product that they have been reading all these years. As described above, we get three duck stories and a mouse story all drawn by Italian Disney Master, Giorgio Cavazzano. The Dazzling Duck She-Venger was the biggest surprise as I had no idea that Daisy Duck had her own Duck Avenger type secret identity and adventure. I am always ready for a solid Donald and Fethry team up adventure like we get with The Forgetful Hero. Plantastic Voyage will expand your knowledge of plants, and a great Mickey Mouse detective story is always a fun mystery.

You can purchase Disney Masters Vol. 12 at the link below:

This volume is also available in a box set along with Disney Masters Vol. 11.