When Should We Expect DuckTales Season 3?!

Season Two of DuckTales has officially ended and we are now in the show’s… what, like… fifth or sixth hiatus? When season three was announced at the beginning of the year that announcement stated that the show would return in 2019. 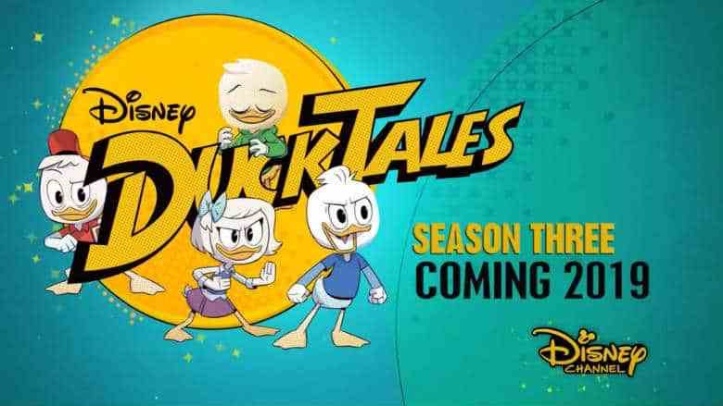 Or course that was before the mid-season’s… second hiatus… is that right (?) that appears to have impacted the release of merchandise for the show. As we neared the end of season two Frank Angones, Co-Producer Of DuckTales, responded on Tumblr to a question about the next hiatus.

The first episode!? This response began to support what we were already beginning to consider for season three. If the producers were just now in late August or early September receiving the animation for the first episode… could there be any chance we would see season three in 2019?

Of course the discourse ramped up after this post, and people within the fandom were asking Frank to give any indication of when we should expect season three. 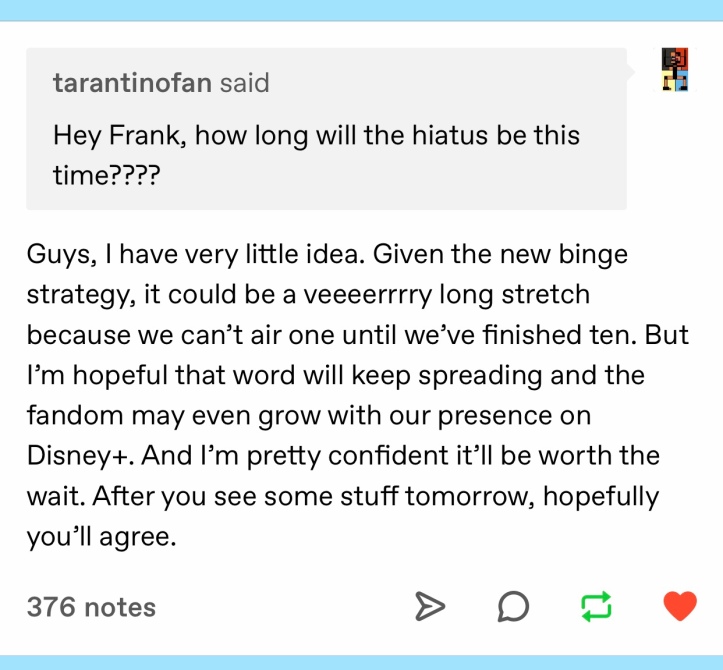 Oh that binge strategy… the bane of Duck podcasts! I love getting a lot of DuckTales stories at one time, but the “binge strategy” makes it very difficult for your favorite DuckTales podcasts to keep up. We go weeks without episodes to discuss and then BOOM! more content than we can cover. Haha… but 😡

I’m not really mad. We get together once a week (most of the time) to discuss the latest episode, news, merchandise, and fan discussion because we love the show and enjoy interacting with our fellow fans. With or without new episodes we really do enjoy doing the podcast. Of course it would be easier to do that if the episodes came out once a week with one break between seasons, but the Disney Channel must have data proving their content thrives off these binge blocks of programming because DuckTales is not the only show they are doing this with.

We know they received the one episode, but here Frank says they need ten before the episodes will begin airing… We do not know the turn around time for nine more episodes… but it looks like we’ve soared well past October and into 2020 at this point.

The good news? Well, the good news is that season three is coming and that the show will experience even greater exposure once it is available on Disney’s new streaming service in November, Disney+. We expect new fans (slightly aged and younger) to find the show for the first time, and we as a community need to be prepared to welcome them with open arms.

Many will meet the family for the first time, and experience the mysteries, betrayals, and heart-warming moments without the disruption of hiatuses or episode shuffling. They will begin looking for the subsections of the community they connect with, and they will find a diversity of fan-made content to welcome them. If we want a season four (or dare I say five!?) the rest of 2019 is very important to the show and your involvement can impact how much DuckTales we get moving forward.

After the season finale aired Frank was hit with a barrage of questions from fans. He’s the type of guy who understands fans, and he was gracious enough to try to answer as many questions as possible. He did so with a larger Q/A Tumblr response than we normally see. In those answers he added this about the upcoming hiatus.

That settles it folks. We are in for another long hiatus, for the time being. We know this info is disheartening to many, but we have a lot to look forward to in season three. Over the next few weeks DuckTalks will be covering news (hopefully including some merchandise news) and reviewing the episodes that aired in the last episode bomb (including the season finale). We hope to do some fun things along the way. We’ve received approvals from Disney to speak with some people on the show during the hiatus, we’ve gained commitments from other Disney Afternoon legacy talent who will share more behind the scenes info of our favorite shows, we have new content coming for some products that are coming, and we will probably dive into some of the content on Disney+!

We, as a fandom, have control over the content for Disney DuckFans over the next few months. There are amazing artists, writers, cartoonist, creators, theorists, and etc. who can step up and fill that void created by this hiatus.

Lastly, some words from Frank on how the community should treat one another. We are all different and that can make fandom fun when we respect one another. We all have favorite characters, shows, creative outlets, and even ships. Just because we disagree on something doesn’t make us enemies. We can all come together under the umbrella of the one thing we have in common, and celebrate that one thing. I think Frank said it better, so I’ll just insert that quote. 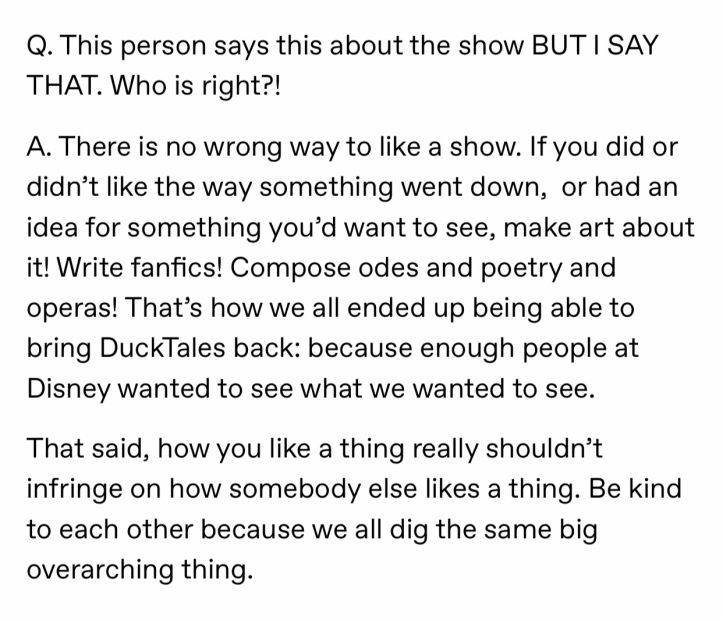 We hope the hiatus ends with an even larger DuckTales fandom eagerly awaiting that season three premiere.