We are only two weeks away from a new episode of DuckTales, and the Disney Channel has started running promos for the new episodes. This week we’ve seen a teaser from the LA Times Entertainment and this Disney Channel promo.

I’ve watched this promo a few times, and thought it would make a good blog to do some analysis. You can check out the promo by following this link, and then come back for my thoughts.

WE’ve seen it reported that the Disney Channel has received some new bumpers. The television spot begins with the announcement that the show is returning on Saturday March 9th… Very informational. but not very exciting.

Here we go! Here’s the excitement. The promo begins with quick shots of Della struggling to control the Spear of Selene (which was a rocket ship!). Della’s voice can be heard over the quick scenes saying, “Mayday, mayday” Based on this and other scenes we’ve seen in the promos over the past few days we believe the episode will include Della’s story from the moment she lost control of the rocket ship (if not before). 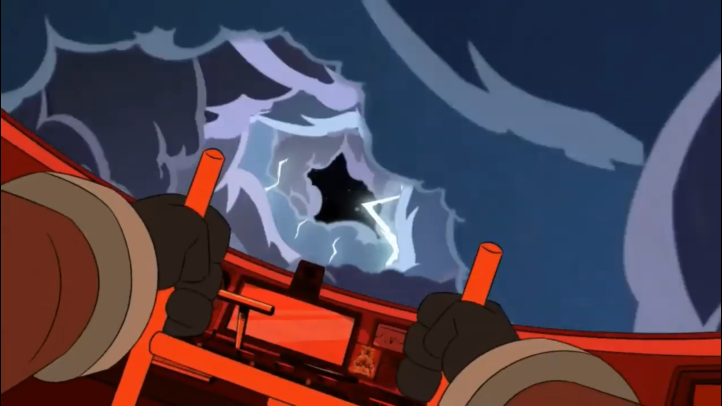 Next, the promo includes glimpses of scenes that we have seen before in previous episodes. In the season one episode titled “The Last Crash of the Sunchaser!” we learned that Della Duck was lost after flying an experimental rocket ship into a cosmic cloud. After flying into the cloud Scrooge lost contact with her, and despite spending a vast amount of his fortune to find her she has been missing ever since. The flashbacks to previous episodes include the now iconic Duck Family painting that first began the mystery of Della Duck for Dewey Duck and viewers in the series premiere “Woo-oo!” In the season two premiere episode, “The Most Dangerous Game… Night!”, we learned that Scrooge had relocated this painting from the Wing of Secre… I mean the garage to a place of province over the fireplace. The next flashback returns to a glimpse of Della at her desk from “The Last Crash…!” Next the promo includes glimpses of Dewey when he first recognized his mother from the paining in the series premiere. 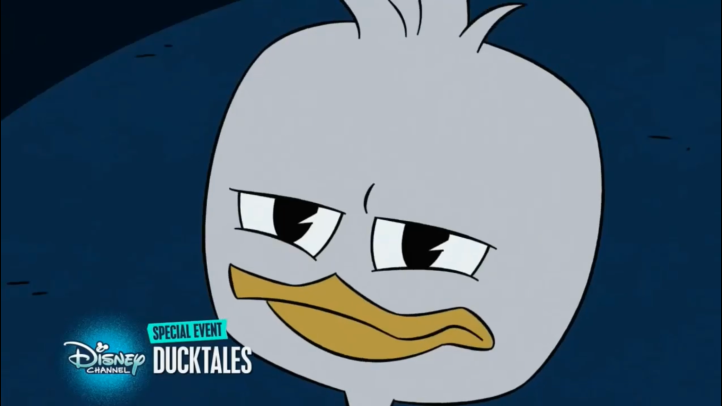 Dewey’s partner in crime in his search for Della Duck was Webby Vanderquack. Webby’s knowledge of Scrooge McDuck and his family history was indispensable to Dewey’s quest for truth. In the promo Webby points out that “bad things happen to people who ask about Della Duck.”

The promo’s narrator says, “The mother of all mysteries… will finally… be revealed.” during some of the quickest flashes of clips. If there were any questions as to how much of Della’s story will finally be revealed, there shouldn’t be now.

During these quick clips we see the Spear of Selene struggling through the storm and plummeting to the moon. I didn’t believe Della had been on the moon all of these years, but these scenes make it clear that all of those years ago Della crashed on the moon. I’m sure we will learn how she has survived.

After the crash of the Spear of Selene the promo makes a drastic change. We see some static flashes that indicates some sort of camera or security system is coming online. After this static (which reappears a few times in the promo) we start seeing clips that include a boarder and a little dot on the top left corner. It appears these indicate some sort of video recording of Della’s adventure. During these clips we see where Della is staying. We believe it is the inside of the Spear, but who knows maybe Della finds another structure on the moon. 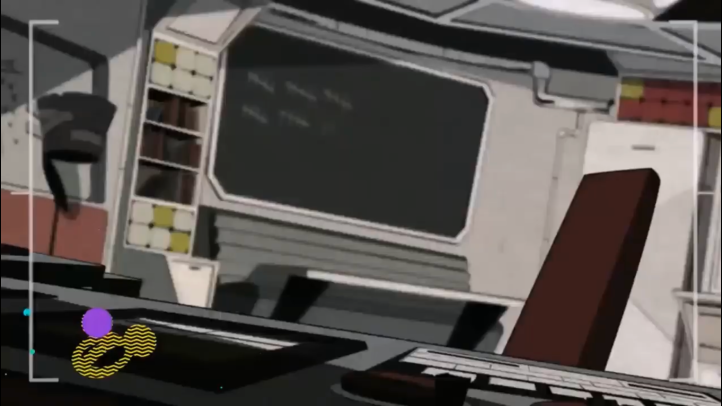 The promo continues to flash between scenes of Della piloting the Spear of Selene and other shots of her in space. Notice that Della’s hair is short and she is still wearing the red space suit that we saw in the season one flashbacks of Della leaving in the rocket.

After the crash Della is trapped under some wreckage from the Spear of Selene. We saw a scene from after the crash in the LA Times articles. You can follow this link if you haven’t seen it yet.

Next we return to the video recording… in the recording Della appears to be sitting at a desk within the wreckage. She is no longer wearing her space suit, she is holding the family photo and she introduces herself to her (at the time) unhatched children. You can see that Della’s aviator’s jacket is missing a sleeve and that she has taped a trash bin to the with the bottom cut out to a white board. We think this scene takes place a few days after the crash when Della is beginning to fear she will never be found.

The promo next reveals Della on the surface of the moon staring at earth. The wreckage of the Spear of Selene is clearly in the frame lodged in a canyon wall of a moon crater. We know from the LA Times clip that Della is able to breath by chewing Oxy-Chew an oxygen supplement created by Gyro Gearloose (and a nod to the DuckTales Remastered video game). What is not as clear is how does Della survive the extreme temperatures on the surface of the moon without a space suit. The moon experiences 260 degrees ferienhet during it’s 13 day long daytime and negative 280 degrees at night!

Also note that we see that Della is missing a glove, half sleeve, full sleeve, and she has a bandage around her wrist. We also noticed that Della appears to be wearing her goggles over her eyes. Some have speculated that Della was also injured from being trapped in the wreckage after the crash. It is curious that we do not see her feet… some have theorized that maybe Della lost the leg or foot that was trapped under the wreckage. 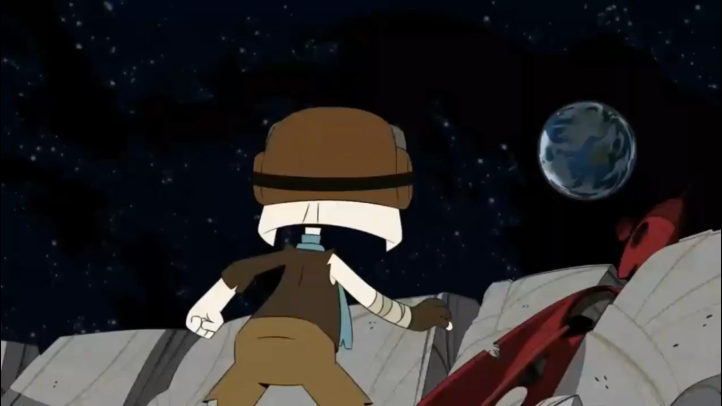 The next clip includes Della who has been trapped on the moon for some time. We do not know how long she has been surviving on the moon’s surface, but viewers should note that her hair is much longer than it was when she first crashed. We have seen Della on the moon twice before and each time she had the longer hair. So it looks like we should expect to see Della’s story from impact to present day.

Della’s name is seen in a series of flashes or explosions on the moon’s surface. Maybe this was from one of her earlier attempts to be found. Maybe we see her on the surface of the moon watching the other rockets that Scrooge sent looking for her as they left earth… One of the burning questions from Della’s situation is how these expeditions to find her could have missed her on the moon. 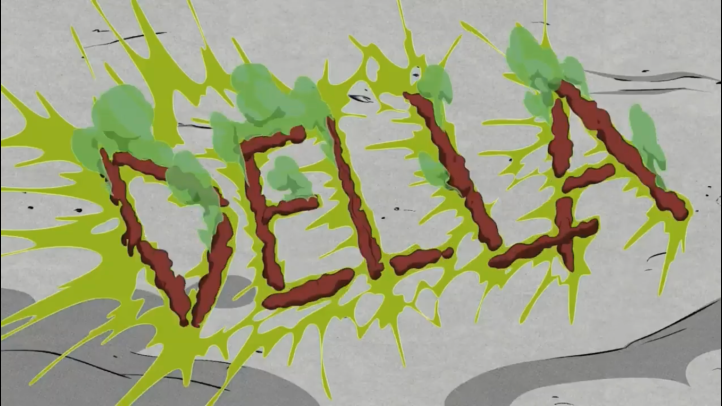 Next a very determined Della can be seen holding a wrench and standing in front of a wall with many tally marks on it. The tally marks most likely represent her time on the moon. 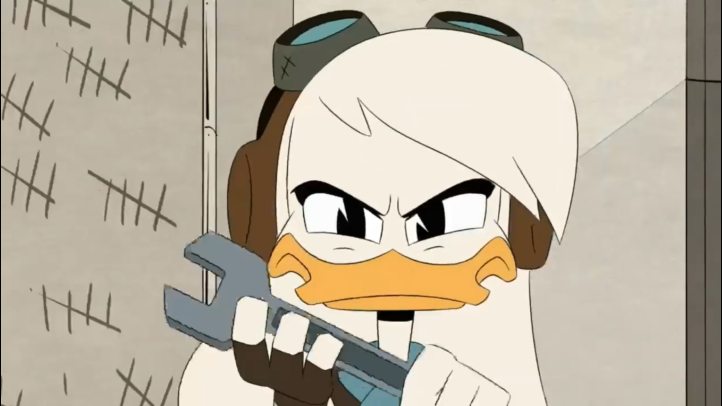 The promo appears to jump back in time. Remember when we pointed out Della was wearing her Goggles in the earlier clip?

In case you were worried this episode would only include Della trying to survive and escape… Monster! It is unclear if the monster is rising from beneath the moon’s surface or if it has crashed on the moon. There is of course no context in this video to indicate what Della is doing when they appear. The design of the space monster is very interesting and we can’t wait to see if there are any NES game references… because we know there will be. 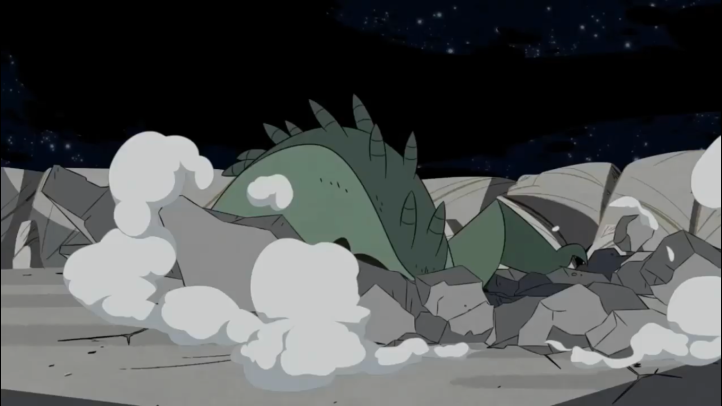 The clip then returns to Della with her long hair. She is looking at something with a proud look in her eyes. Then she looks surprised. Because it followed the scene of the monster I wonder if her surprise is because this creature shows up? 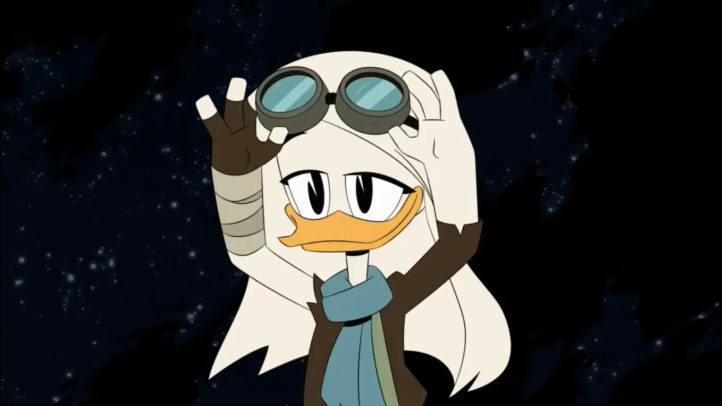 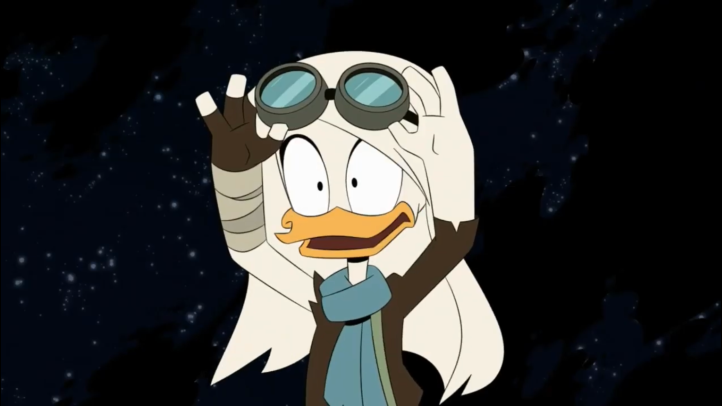 I have also wondered if this scene with the moon-dust clouds are from the Monster’s appearance. Della appears to be wearing her aviator’s cap in this scene, which she was not wearing in the previous scene. One thing can be known for sure, Della faced many problems over her years stuck on the moon. The end of the promo is mostly Della screaming,ing in various scenes from throughout the episode. 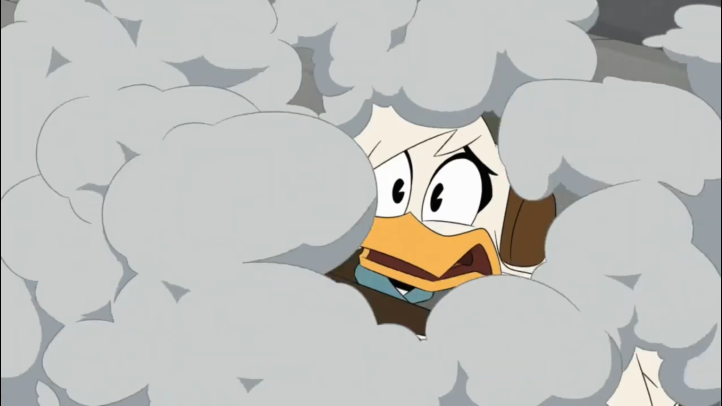 You can see that Della has had many almost successes and many failures over her time on the moon. These scenes depict Della’s frustration and desperation as she tries to get off the moon. 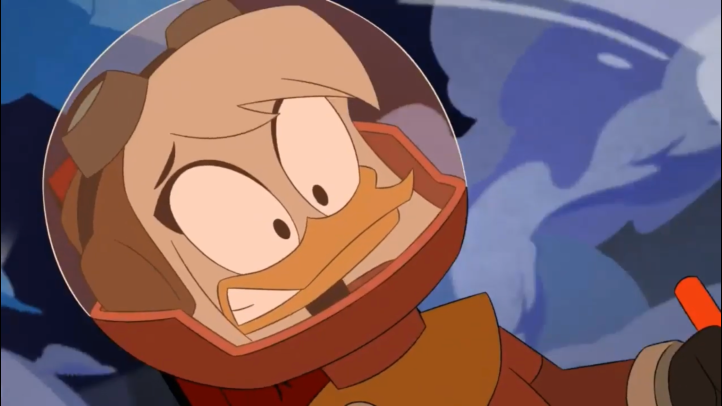 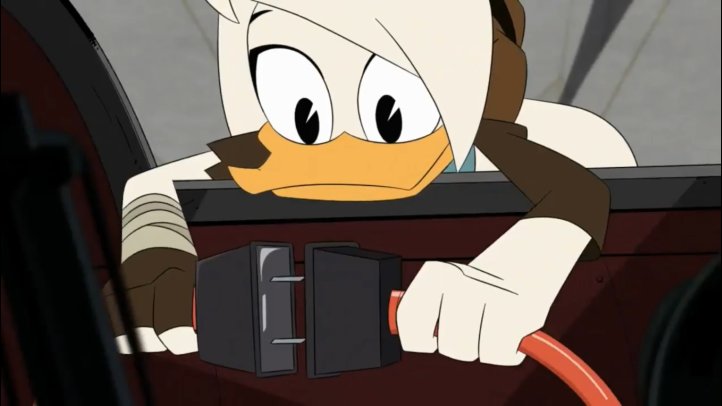 The promo ends with scenes from our first glimpse of Della in “The Shadow War!” In these scenes we see the wreckage of the Spear of Selene spread across the moon’s surface, and then we see Della fixing the monitor that allowed her to see the broadcast from Duckburg that included her family. 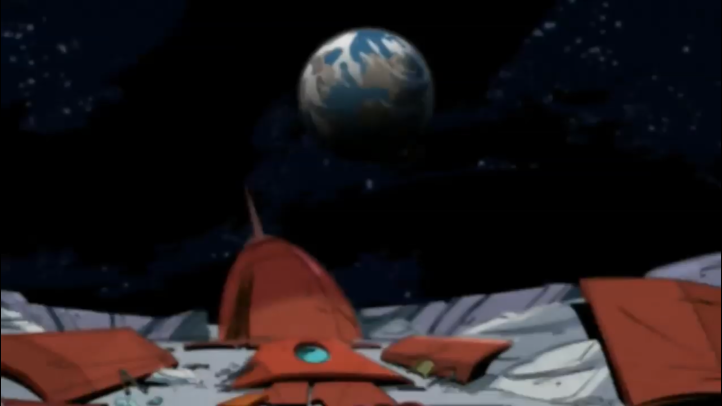 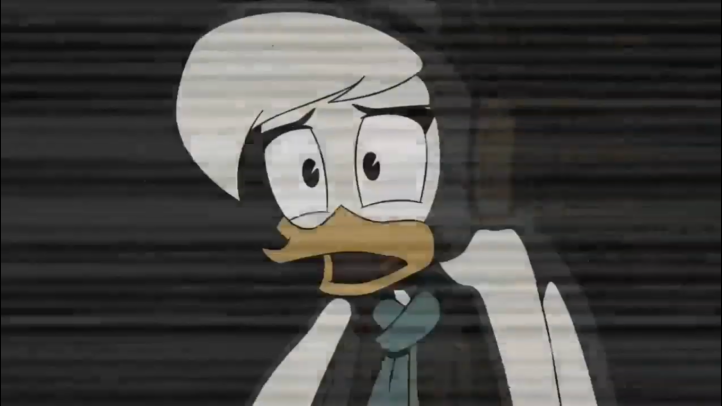 DuckTales returns Saturday, March 9th at 8 am on the Disney Channel with the episode titled “Whatever Happened To Della Duck?!” What do you think of the the promos? How excited are you for the return of the show and for Della’s first featured episode? Join the conversation below or on Twitter @DuckTalks