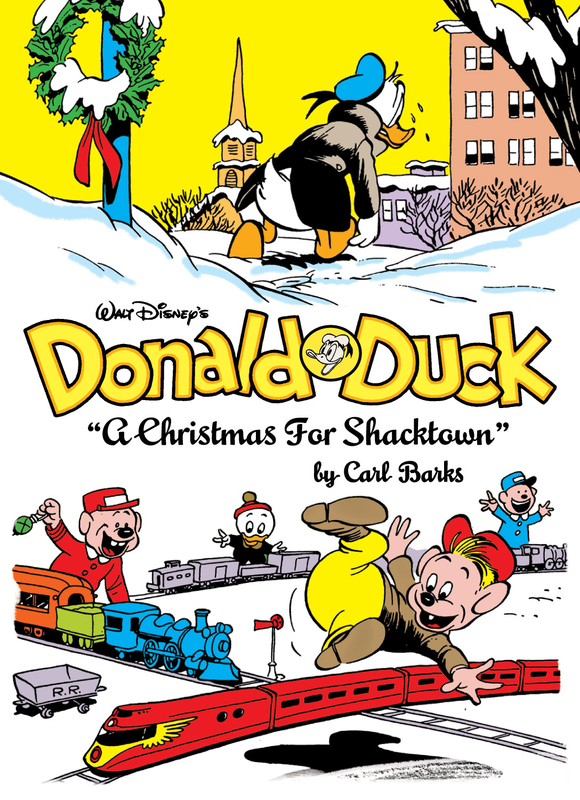 The Complete Carl Barks Disney Library Vol. 11: A Christmas For Shacktown was released by Fantagraphics in November 2012.

The illustrations that make up the cover of this book are from Three Good Little Ducks (top image) and Christmas on Bear Mountain (bottom image).

This edition of the Carl Barks library is 234 pages, and it includes 22 stories that were published between 1951 and 1952. There are also some supplement sections with a short biography on Carl Bark’s life as well as behind the scenes pictures and stories about each and every story that is included in this edition. It is full of great and interesting information. I am glad that it is included in this volume and every volume of the Carl Barks Library.

Carl Barks Library Vol. 11 is available in hardcover and Kindle\Comixology versions. A link to buy this book can be found at the end of this review. 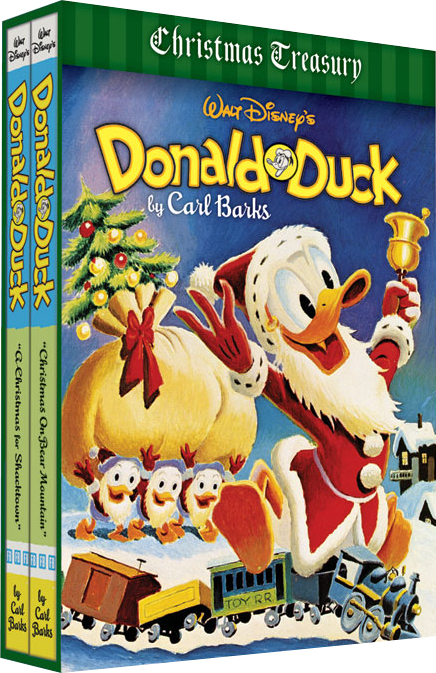 This volume is also available coupled with Carl Barks Library Vol. 13: Trick or Treat as a Holiday Box Set. 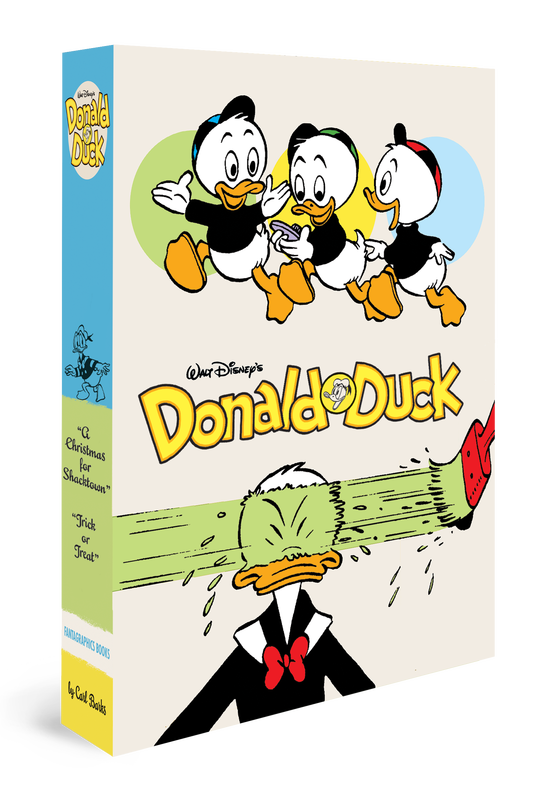 The next book in this series Carl Barks Library Vol. 21, Christmas in Duckburg, will be released in September 2019.

There are 22 Disney Duck stories included in A Christmas For Shacktown:

A Christmas For Shacktown is a classic Christmas story where the Duck family wants to do something different during the holiday season by helping the less fortunate families of Shacktown have a great Christmas. Donald, Daisy, Huey, Dewey, and Louie are on board, but they are going to need a donation from their Uncle Scrooge and some luck from Gladstone Gander to raise the funds needed for the meal and a toy train. Don Rosa wrote a sequel to this story, Gyro’s First Invention, which is included in the Don Rosa Library Vol. 10.

Scrooge McDuck’s Money Bin makes its very first appearance in The Big Bin on Killmotor Hill. Scrooge needed a place to store his money and keep out the Beagle Boys and other enemies…and so the Money Bin was built.

Donald is the only Duckburg resident that does not have a turkey for Christmas dinner in Gladstone’s Usual Good Year. He tries to win a turkey via a lottery against his cousin, Gladstone Gander…3 times.

Donald sells a song in The Screaming Cowboy. His song has the power to create avalanches.

In Gladstone’s Terrible Secret, Donald and the boys follow Gladstone around for the day to test his luck. They think Gladstone is keeping the source of his luck in a safe in his house, but it has nothing to do with luck. What could possibly be in the safe?

In The Think Box Bollix, Gyro invents think boxes that he puts on a path in the woods. Huey, Dewey, and Louie are Gyro’s assistants. Donald wants to trick them so he gets a wolf costume and pretends that the boxes transformed the wolf to a smart wolf who suddenly craves roast duck instead of chickens. It is a great trick until Donald runs into a real wolf whom the think boxes gave the ability to talk and that very same idea …roast duck.

Donald owns a grocery store in Full-Service Windows. In this one page story, he is cleaning his storefront window when he gets the idea to just remove the glass and bring it to a car wash for that professional sparkle.

Donald wants to roll his lawn in Rigged-Up Roller. Huey, Dewey, and Louie let someone borrow his lawn roller so they create their own duck powered roller suit using a kitchen rolling pin.

Donald searches for an ancient treasure in a Carl Barks’ classic, The Golden Helmet. Donald is working as security for a museum in Duckburg. He discovers a treasure map on a Viking ship that maps out where a Golden Helmet was hidden. The weather of the helmet and the map would inherit North America. We meet Azure Blue and Sharky who plan to claim North America for themselves and enslave the entire continent. It is up to Donald, Huey, Dewey, Louie, and the museum curator to find the Golden Helmet first and save the day. Don Rosa loved The Golden Helmet and actually wrote a sequel to it called The Lost Charts of Columbus. The Lost Charts of Columbus can be found in the Don Rosa Library Vol. 6.

Awash in Success is a one pager with Huey, Dewey, and Louie in the spotlight as they sit by a bench next to a water fountain in the park that sprays people in the face with water. They come up with the bright idea to sell towels for 10 cents. They must have be related to Scrooge McDuck.

Stable Prices packs some clever humor for a one pager starring Donald Duck and Scrooge McDuck. Donald runs a stable, and Scrooge wants to rent a horse for exercise. Donald let’s him know that the price is $1.00/ hour/horse, but that amount goes down based on how many horses he rents. So Scrooge pulls a Classic Scrooge on Donald and rents 11 horses.

Donald has plans to spend the summer vacation with Huey, Dewey, and Louie on a safe house boat in Houseboat Holiday. He bets his neighbor a turkey that his house boat plan is well thought out and safe and there is no way that the boys can get into trouble. Donald should have just bought the turkey for his neighbor right after making the bet.

Donald buys a homestead full of fake gems in Gemstone Hunters. He tricks his cousin, Gladstone, into buying the land to try to prove that not even Gladstone won’t have luck finding anything valuable on the land. Come on Donald…we all know how this story is going to end.

Donald is a stamp collector in The Gilded Man. He is in search of an old stamp from British Guiana that is worth $50,000. A giant man in the jungles of British Guiana made of gold named El Dorado has the stamp that Donald desires.

Donald dresses himself in full armor to rescue Daisy’s cat from a telephone pole in one pager Armored Rescue.

Donald paints himself into a corner literally in Crafty Corner, but did he do it on purpose to skip a social with Daisy?

Scrooge has more money than can fit into his money bin. He hires Donald to spend the excess money in Spending Money. Donald has no trouble spending the money; however, Scrooge owns all of the places that he spends the money at. So the money comes right back to him.

Donald wants the boys to decorate the Christmas tree with new handmade ornaments in Treeing Off. Huey, Dewey, and Louie eat the oranges that they were going to use for ornaments so they end up making ornaments out of Donald’s present…golf balls.

Donald brings some mistletoe over to Daisy’s house in hopes for a kiss in Christmas Kiss.

Huey, Dewey, and Louie are making their wishlist for Santa in Projecting Desires.

This is another solid volume of the Carl Barks Library. It is especially great if you want to read some Disney Duck goodness for the Christmas holidays. The title story, A Christmas For Shacktown, is a charming Barks holiday story. In this volume, we get treated to the first appearance of Scrooge’s Money Bin in The Big Bin on Killmotor Hill. Classic Barks story and fan favorite, The Golden Helmet, is also collected in this volume. I really enjoyed reading every story in this volume.

The bonus content on Carl Bark’s life and the behind the scenes content on each story really completes this volume for a comprehensive experience. I can’t wait to read through the rest of the volumes in the Carl Barks Library.