“The Most Dangerous Game… Night!” Review

*I had programming issues that kept me from re-watching the episode for several days. In the future we hope to get these reviews out earlier in the week.

This weekend the most magical thing happened. My alarm went off at 7:15 AM. I was groggy and considered laying in my bed a few more minutes, but I had promised my girls we would get up… I went to my girl’s and gently nudged them and I asked each of them one question, “Do you want to watch DuckTales?”

They both shook their heads to indicate “yes,” and we grabbed our cereal and pillows to camp out in the living room floor. I love these kind of Saturday mornings.

There was only a short break consisting of a couple of months between the DuckTales season one finale and the premiere for season two. The first season definitely ended on a high note, and we couldn’t wait to continue the adventure with our favorite uncles and kids.

As Saturday drew near, we started seeing promo images and one video… as if we needed to be more excited for the show’s return. Season One was so exceptionally good that we have to admit the bar was set kind of high for the second season. If the first episode of the season is any indication, that bar will be no problem. “The Most Dangerous Game… Night!” may at first glance appear to be a strange season premiere for the series. It wasn’t a double-sized 44 minute episode, the majority of the episode takes place inside the mansion, and non of the show’s major villain were to be seen (except for the updated intro!).

However, the episode simply works. It includes a fun adventure that both feels dangerous and absurd at the same time. We are reintroduced to the main adventuring family, and a few of their closest characters. The show quickly and seamlessly reminds the viewer of the families accomplishments of last season without dragging its heals through the muck of what could be considered their failures.

As the episode opens the Duck clan (sans Donald) are exploring an ancient temple. In the opening we learn that Louie is stressing over the dangers of exploring while the rest of the family perform like a well trained team. Dewey and Webby have become an unstoppable duo fueled by their confidence (Dewey) and capability (Webby). Huey has settled into his role as the team’s brainiac, and Scrooge is calling the shots as the leader. This kind of leaves Louie to wait for an opportunity to talk his way out of a situation, and he’s feeling unnecessary.

Easter egg #1! The music playing behind Huey and Scrooge’s “Step, turn, step, turn, step, dodge, and step.” should be familiar. It is from the OG theme, and sounds very similar to the video game theme. Before the opening is over the episodes’ conflict is established and we know the episode will focus on Louie’s struggles with life as part of an adventuring family.

When the family returns to the mansion they are “greeted” by Duckwoth and Mrs. Beakley. We see that the painting that includes Scrooge, Della, and Donald from the series premiere has been hung above the fireplace mantle. No doubt an indication to the viewer that the family has come to terms with the loss of Della. It’s also cool to see Duckworth cleaning around the mansion. He was always a favorite of mine from the original show, and I felt like the new one was missing him in the first half. And it was great to hear Mrs. Beakley’s trademark (as of last season) dry wit.

Louie expresses to Huey that he worries he isn’t prepared to be an adventurer. He feels that each time he goes on an adventure it could be his last. When Huey tells him everything is fine, he begins devising a plan to take a break from adventuring…. and he doesn’t care what he must do to stay home. 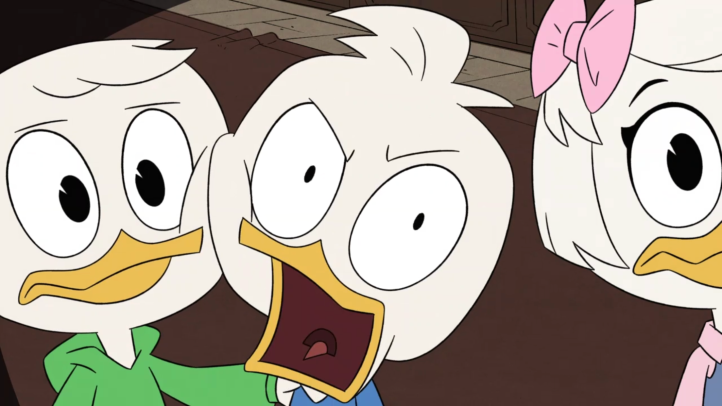 Louie attempts to convince Scrooge that the family needs a break from adventure and that leads to a family game night. It’s fun to see Scrooge become so motivated by something as trivial as game night. I don’t think the classic Scrooge would become excited by something like this, but I loved that this show was willing to do it. I also enjoyed how Scrooge grabs Donald as his partner. Of all the characters in the mansion, Scrooge knows that he will work best with his nephew. I’ve already said that I really enjoy Duckworth and Beakley, and their scene together makes all of the waiting for Duckworth in season one worth it.

I was completely caught off guard when Gyro showed up in the episode! I wasn’t expecting him to interrupt the family’s game night. Jim Rash’s Gyro Gearloose is one of my favorite changes to DuckTales in the reboot. Every line is perfect and I have to rewatch many of his scenes because I can’t hear him over my own laughter. Donald and Scrooge’s scenes together during the family games were some of the most shockingly hilarious of the show to date. The comedy around their game of charades will forever fill the internet.

The production team at DuckTales needs to be consulted about merchandise ideas for the show! Last season we saw the bobble head that every fan of the show dreams of (Let’s Get Dangerous!), and now we have $CROOGEOPOLY. I mean… why hasn’t this version of the game been made before!? We will be doing a blog later this week covering more details of this board game. 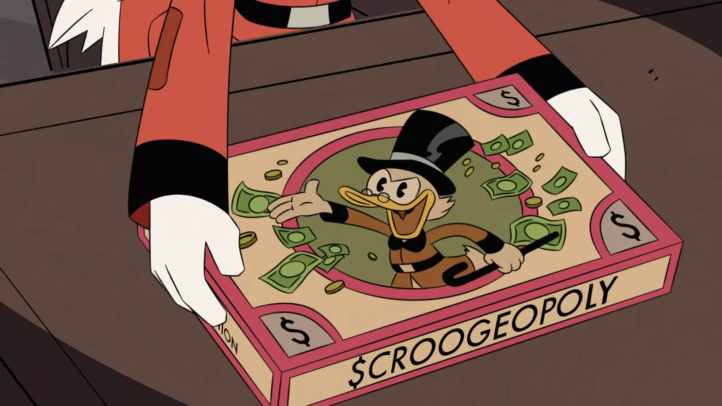 As I mentioned earlier none of the show’s major villains are in this episode. Instead we were introduced to the Gyropuddlians! No, I’m not kidding. We get a brand new civilization of miniature antagonists to teach Louie a lesson (all, like, four of them). I was left with one very important question about these scenes, What is up with Gyro’s hair!? I mean… the original Gyro had reddish hair, but what is going on! Holy callback to the OG intro Batman! There are several callback easter eggs in this episode, but this one was my favorite. And check out that Bulbtech!

Speaking of callbacks, I just saw this one on Twitter. I first saw it in one of @JediMark82‘s tweets, but he didn’t mention where he first saw it. I love these easter eggs! Let us know if you noticed anymore…

Ultimately the day is saved (Come on! That’s not a spoiler!) by Louie who see’s the patterns and devises a plan to defeat the Gyropuddlians.

After everything is said and done, Scrooge meets with Louie to explain to him that he does have something to add to the team. Scrooge asks Louie if he knew how he earned his fortune. Louie responds that it is because he was “Tougher than the toughies and smarter than the smarties.” Scrooge adds that it was also because he was “Sharper than the sharpies.” I already knew this was the original saying coined by Scrooge, but I understood the importance of the reference because I’ve recently been reading through Fantagraphics’ Don Rosa Library. And the payoff! Frank Angones had already made it known season two would include a new story arc for Louie, and with the addition of the next few episodes descriptions we know Louie will get a lot of the spotlight. It will be interesting to see what kind of hijinks will become of Louie INC.

I loved this episode, and although it might appear to be a strange season premiere it was an excellent start to a new season. I still contend that the show continues to get better with every episode. I enjoy all of the characters and every week I am looking forward to some laughs and adventure. Not only was “The Most Dangerous Game… Night!” a great start for season two, it was one of the best episode to date.

Next week… the introduction of Fethry!