Fantagraphics debuted the first volume of the Don Rosa Library, The Son of the Sun, in 2014. Since then, they have released two volumes each year. In November 2018, the tenth and final volume, The Old Castle’s Other Secret, will be released. The library will contain the complete chronological collection of all of his Uncle Scrooge and Donald Duck stories. There were a total of 88 stories by Don between 1987 and 2006. 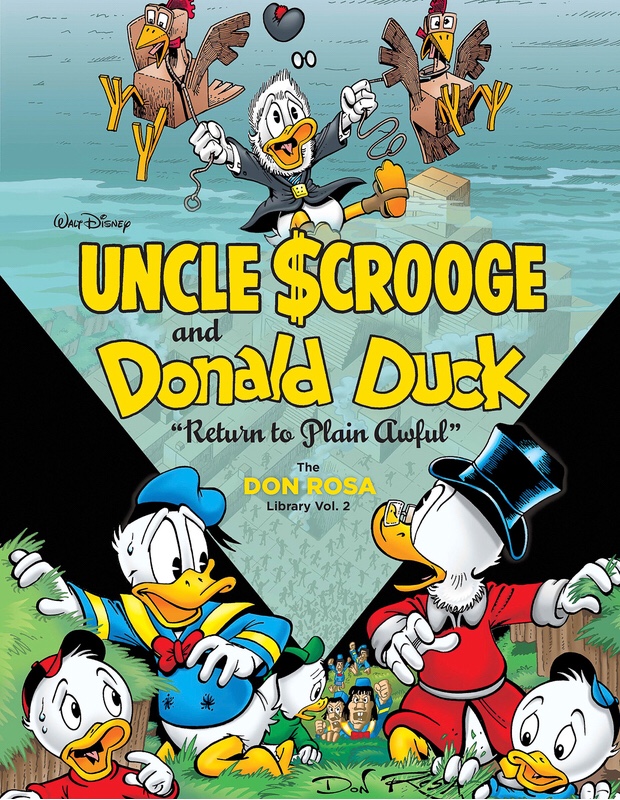 The title and cover art from Don Rosa Library Vol. 2 comes from Don’s 16th comic story, Return to Plain Awful. Like the cover for Vol. 1, Glomgold is front and center on this cover and in that story. We will go through the individual stories later on in this review.

Don Rosa Library Vol. 2 is 216 pages, and it includes stories published between 1988 and 1990. Vol. 2 was released in November 2014. The majority of the pages are the stories, but there are also some supplement sections with a biography about Don’s life as well as behind the scenes pictures and stories about each and every story that is included in this edition. It is like bonus features on a blu-ray, and it is full of great and interesting information. I am glad that it is included in this volume and every volume of the Don Rosa Library.

There are 14 Disney Duck stories included in the Don Rosa Library Vol. 2:

Wow! The stories and art in this volume were all SO GOOD! The Crocodile Collector was my favorite story from this volume. I also loved that Don worked on a story for a DuckTales magazine, and the Disney MGM Studios unfinished comic was a really gem. I am thankful to Fantagraphics for including that one.

The bonus content on Don Rosa’s life and the behind the scene content on each story really completes this volume for a comprehensive experience. One of the really cool things that I learned about Don Rosa from this volume is that he wrote the script for two episodes of TaleSpin, and now I have to rewatch the following two episodes of TaleSpin: “It Came From Beneath the Sea Duck” and “I Only Have Ice For You”.

There is also quite a few covers that Don did during this time period that are included in a covers section. I am really looking forward to my next journey into the Don Rosa Library with Volume 3.