Shop Till You Drop

We are enjoying our expansion of Disney Duck knowledge with Fantagraphics’ libraries (Check out our reviews and our Discord Meet-up) and with IDW’s line of Disney comics. The best part about reading the IDW comics is that they are just being released in the US for the first time, and we don’t feel like we are WAY behind all of you who have been reading Carl Barks and Don Rosa comics for years.

I really enjoyed the three stories found in this issue of Walt Disney Showcase. You can get your own copy at a local comic shop or digitally online at ComiXology as it is on shelves today. You can check out a preview of the book, courtesy of IDW, by clicking on the cover and my review is below! 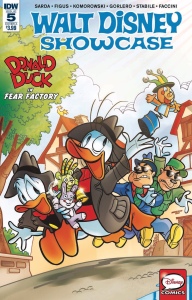 The first story is titled “Fear Factory” and it is the very first time I have seen or read anything with Fethry. It was revealed that the character has a design for season 2 of DuckTales, and this created additional excitement for me when I realized he was in this comic.

You can check out our Character Spotlight entry for Fethry by Josh here.

“Fear Factory” is a fun story where Donald and Fethry find themselves involved in some secret, spy-like antics. If you follow our blog you may know that I love all things spy related (check out my posts about “Confidential Case Files of Agent 22!”) and I was expecting that I would enjoy this story from the start.

Donald and Fethry change into their spy trench coats and enjoy a world trotting adventure that requires they solve a mystery for their boss, Mr. S. Along the way they also cross paths with Rockerduck (also believed to appear on Season 2 of DuckTales because we saw a redesign of him at SDCC). I won’t spoil the story for you any more, but I enjoyed this adventure and it’s stylized art.

The second story of this issue “Wake Up Call” is a one page story about Gyro enjoying his breakfast… Yes that is it. There isn’t much to say here other than I thought the art and design of the characters were enjoyable and they harken back to a time in Disney Duck comics that I am not familiar with.

Of the three stories the third one, “Shop Till You Drop” is the most unfamiliar to me. In this story Scrooge escorts a young, female duck to the mall for some shopping. The comic identifies her as Glittering Goldie’s granddaughter. I have never heard of this character or what kind of relationship she has with Scrooge. It appeared as if they have a family-like relationship. Scrooge treats the teenager as if she were his own niece, and even spends a little money on her! 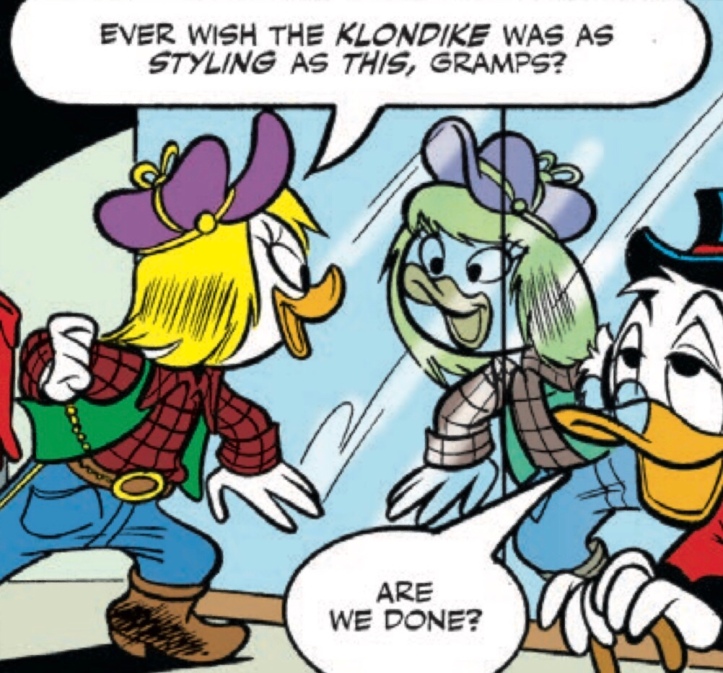 Walt Disney Showcase #5 was a great read for Disney Duck fans, and I highly recommend you pick it up at least for the Donald and Fethry adventure. We enjoy these short stories and enjoy learning more about the histories of these characters.