Who Are Lena’s Parents?!

By the end of the latest episode of DuckTales (“The Beagle Birthday Massacre!”) DuckTales’ fans were treated to a surprise twist as we learned the newest addition to the show may not be who our family of ducks thought she was. As the show ended, Lena was shown to be conversing with a very evil-looking shadow who she called “Aunt Magica.”

The name brought a gasp from longtime Scrooge McDuck and DuckTales fans. Magica De Spell is one of Scrooge McDuck’s greatest arch-enemies (remember Donald said there were too many to keep up with)! Ever since her introduction in the classic comics, Magica has been after Scrooge’s “Number One Dime.”  But enough about her, let’s talk about a possible twist! 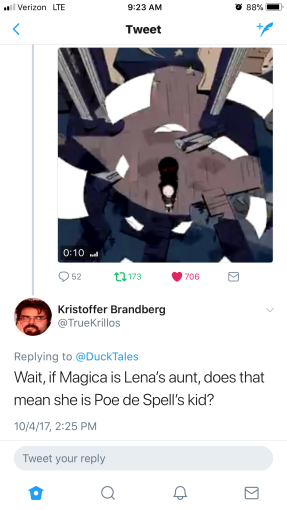 Early this week, Twitter user @TrueKrillos responded to Disney XD’s tweet about the matter with this:Who is Poe you may ask?

Well, in DuckTales Poe was the hat-wearing raven who was the companion of Magica De Spell. We also learned in the series that he was her brother, and that he was transformed into a raven but she was unable to change him back. That I know of, the series never introduced any other relatives for Magica… and given the creators love for all thing Disney Duck history, I expect Poe to show up at some point.

One thing DuckTales creators have promised us is that they will use every known character they can fit into the show. Lena may represent a few new characters that will be introduced into the show to tell new stories. At this time we do not know much about the character. It will be interesting to see what direction the show takes Lena in. My family and I have discussed our own theories as to why she is trying to work her way into the McDuck household, and we all have different ideas. From the promos that have been released we will see Lena in the next episode (“Terror of the Terra-firmians”) and the episode description indicates that Mrs. Beakley will be suspicious of her. I guess we will just need to wait for Saturday to learn more about Lena and possibly her parents.

So what do you think? Could Lena be the daughter of Poe? Do you think we see Poe before he is turned into a raven? Do you hope the creators of the show do something different with the character? Let us know your thoughts in the comments below or on Twitter @DuckTalks