Steve Jackson Games and USAopoly are bringing a classic DuckTales theme edition to their Munchkin game series. Munchkin: DuckTales edition will be hitting stores soon and our friends at USAopoly sent us a copy to Woo-oo over! Thanks USAopoly!

Let’s start out with the well themed box.

The front of the box features Scrooge McDuck popping out of his money with Huey Duck, Dewey Duck, and Louie Duck.

One side of the box features Webby Vanderquack and the other side features Launchpad McQuack. 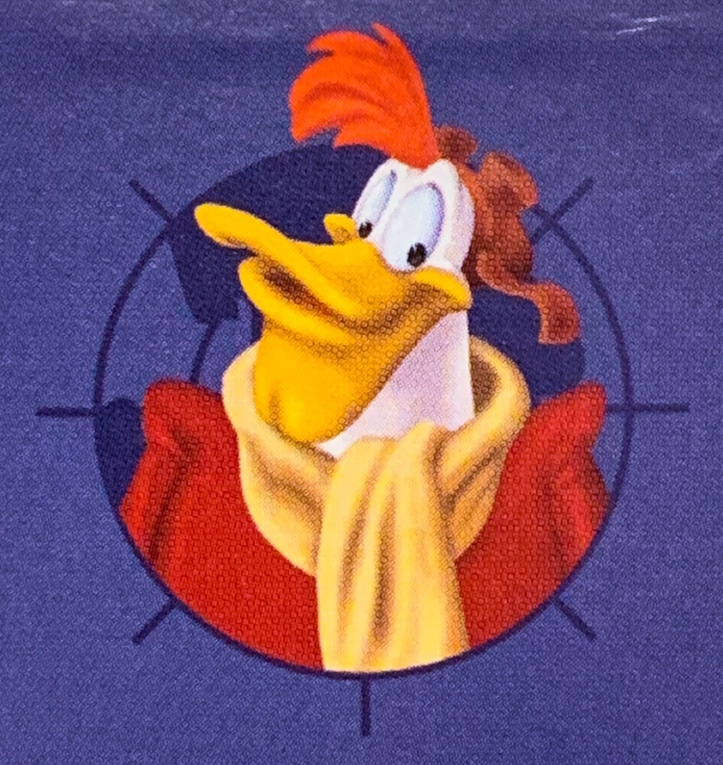 The back of the box features some of the cards that you will encounter while playing the game. It also gives you the basic premise of the game: 1. Kick open the door, 2. Fight the Monster, 3. Grab the Treasure, 4. Reach level 10 and Win. 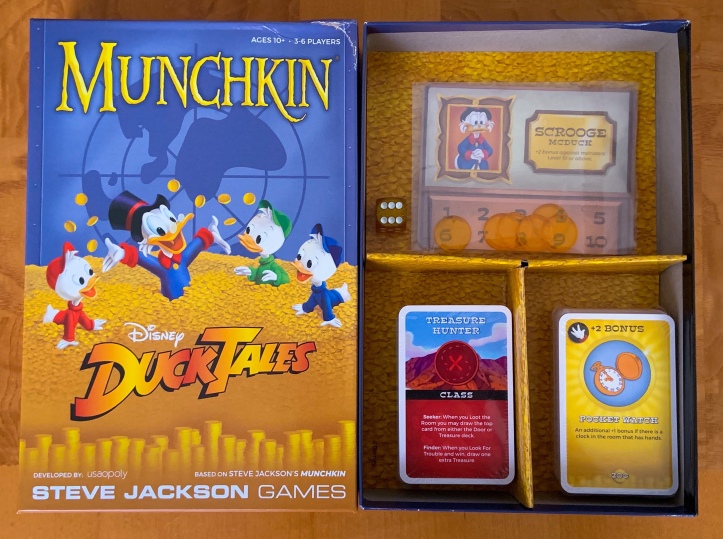 You can really tell that Steve Jackson Games and USAopoly are DuckTales fans when you see the amount of detail that went into this game.

The interior of the box is Scrooge McDuck’s money.

You can play this game with 3-6 players, and the characters that you get to choose from are the six characters as previously mentioned that are featured on the box: Scrooge McDuck, Webby Vanderquack, Launchpad McQuack, Huey Duck, Dewey Duck, and Louie Duck. You choose which character you want to play as by randomly selecting one of the role cards. Maybe if you are playing with friends and family, they might just let you pick Launchpad McQuack.

The back of the Role cards as the same classic DuckTales art from the box cover.

You win the game by getting to level 10 which you keep track of with the plastic trackers that look like gold coins that come with the game. First player to 10 becomes the Richest Duck in the World!

The six sided die that comes with the game even has a unique gold dust design.

The 168 cards that come with the game are made up of two decks of cards. One deck is a treasure deck and the other is a door deck. DuckTales fans are going to geek out seriously about all of the show references that are displayed in these cards. The attention to detail is through the roof. 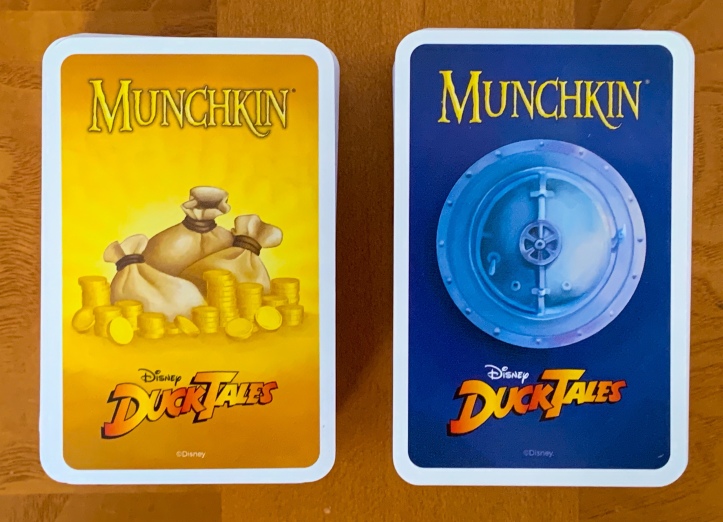 Let’s talk about how to play as well as take a closer look at some of the classic cards in these decks.

Each adventurer starts at level 1, each with special abilities as described by their Role cards. You will then look at your starting eight cards that you get at the start. If you have any Class cards you may play one by placing it in front of you.

Class cards are a type of treasure card where you can be a Gazillionaire, Household Staff, Junior Woodchucks, or Treasure Hunters. Each class has special abilities.

If you have any Vehicles or Ally cards you will play them by placing them in front of you.

If you would have told me any point in my life that I would be playing a DuckTales game released in 2019 that featured Farderek the Leprechaun, I would have called you crazy.

The remaining Treasure cards in the treasure deck are made up of accessories that you may equip your character with to help in monster combat battles and to help you level up your character. Items may be traded or giving to other players as bribes. All of the treasure cards are not pictured below, but wow do they open up the door to some nostalgia feels. 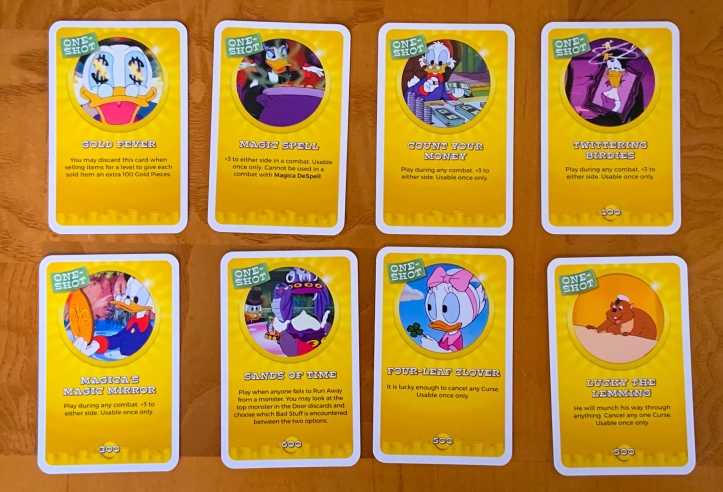 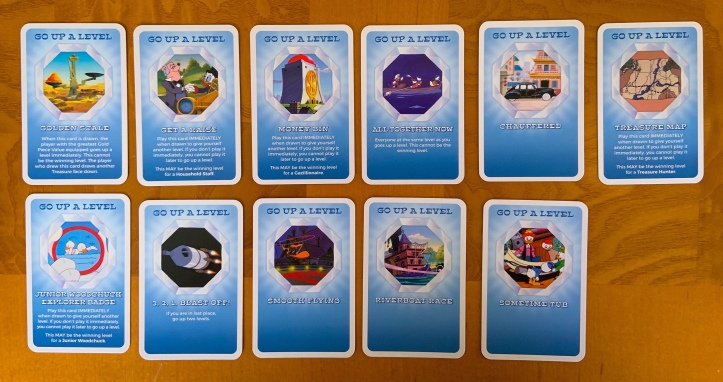 The door deck is full of monsters and classic DuckTales villains that you will battle. I am not going to spoil all of the individuals Monsters cards; however, I can tell you that there is a great representation of both obscure and main villains and there are a lot of them. All of the villains have been given different level numbers that you must defeat. Here is a sample of them. 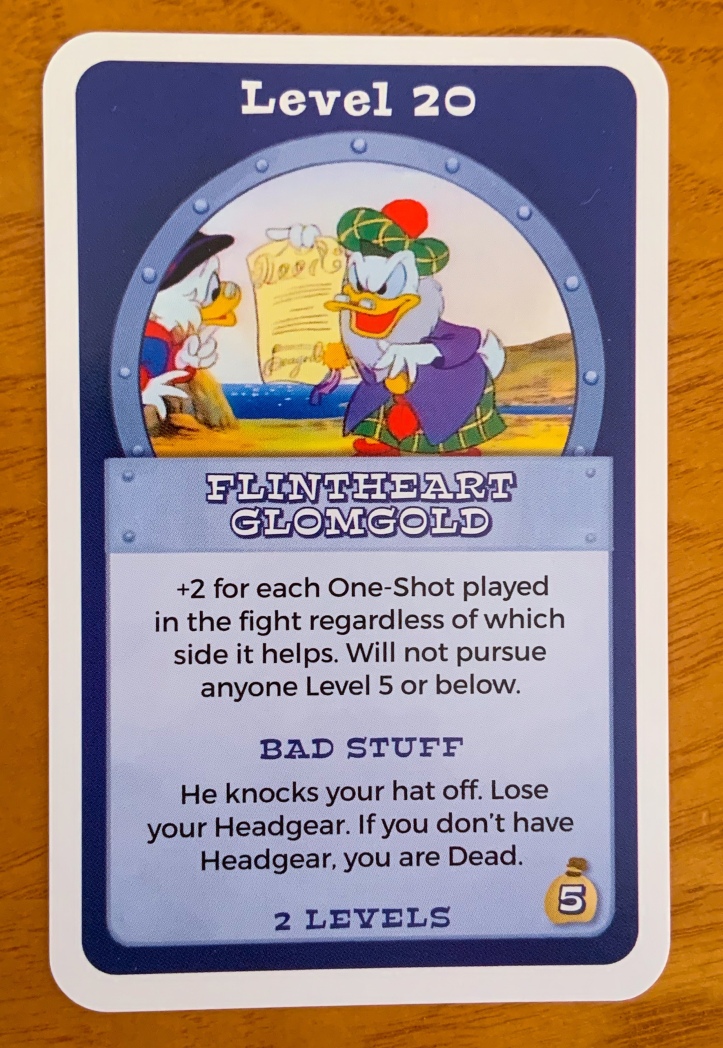 There are also Curse cards that will slow you down in your quest to reach level 10 to obtain the title of the Richest Duck in the World!

This game is a treasure of a gift and love letter to all fans of classic DuckTales and the Disney Afternoon. It is a genuine fan service of a product. The attention to detail by the game designers really show that the game makers are fans of the show from the fantastic product that they have created. It is amazing that we are getting this great of a product for the classic DuckTales show 32 years from when the show debuted, but it was well worth the wait. Munchkin: DuckTales Woo-ooed my socks off! I really hope that this Munchkin: DuckTales game is just the beginning from USAopoly, and that we will see other DuckTales and Disney Afternoon games down the line. Cough, cough…Scroogeopoly, Munchkin: Darkwing Duck, DuckTales Chess, etc.

Munchkin: DuckTales should start to show up in stores in November/December. Some online retailers are currently offering preorders.

It is HIGHLY RECOMMENDED that you buy this for yourself and/or for loved ones this holiday season. Wrap it up and put it under the tree. The box may even fit in your stocking if you have big enough stockings.