Did Louie’s Attention to Detail Shape His Greed?

We have always wanted DuckTalks to contribute to the discussion around DuckTales, Disney Television Animation, and the Disney Afternoon. A couple of weeks ago we came across a Tumblr account by a blogger who wrote about subjects that drove us to analyze the show and characters differently. Josh first shared one of her Tumblr posts after reading her blog about Fethry and Autism Awareness.

Now we are excited to share Drummergirl231’s first official blog on our site as a contributor! We hope you enjoy her analysis of Louie’s greed and attention to detail. Don’t forget to join the conversation below or on Twitter @DuckTalks. Oh! And at Drummergirl231’s Tumblr account!

In the first episode of DuckTales 2017 Season 2, we learned Louie has the ability to read a situation from every angle and predict outcomes. He notices small details, perceives similarities between situations, and is able to come up with solutions to problems based on what he observes.

Huey and Dewey are bright in their own ways. Dewey also notices small details and isn’t bad at deductive reasoning. Huey is the anxious quirky boy genius type who has the Junior Woodchuck Guidebook memorized and knows a myriad of random facts.

Louie though? He’s all about that pattern recognition.

And there may have been some patterns he learned to recognize growing up before he came to live with Scrooge at McDuck Manor.

From what we know of Huey, Dewey, and Louie’s younger years with their Uncle Donald, money was tight. One Tumblr blogger asked Frank Angones what life was like for the four of them before moving in with Scrooge, and Frank answered, “VERY hand to mouth.”
Early issues of the IDW comics show how Donald moved around a lot with the boys working various odd jobs he was afraid to lose.

Frank said that early on, Matt and Sean had the idea that Donald kept losing or blowing up houses. He worked for a while on a tugboat he eventually blew up, and as he was fired, he asked to keep the wreckage. He used the wreckage to build a home for the boys – his houseboat.
At the start of the television series, he is unemployed but preparing for an interview for an accountant position. Frank revealed a line cut from the show on Tumblr, “After two years of internet college, I’m finally a real accountant!”

All this gives us a pretty good idea of the financially unstable home life of the Duck family, pre-reunion. Donald probably did his best to keep the severity of their situation from the boys since that isn’t a burden children should carry, but they would have noticed – some more than others.

In one early IDW comic, the boys try to take a canoe to a small island. While not mentioned in the comic itself, Huey was most likely hoping to earn more merit badges. Dewey craved adventure because as “hand to mouth,” as things were, Donald didn’t have a lot of money to spend on toys or video games to entertain the boys. Upon arriving at the island, Louie complained that there was no treasure. 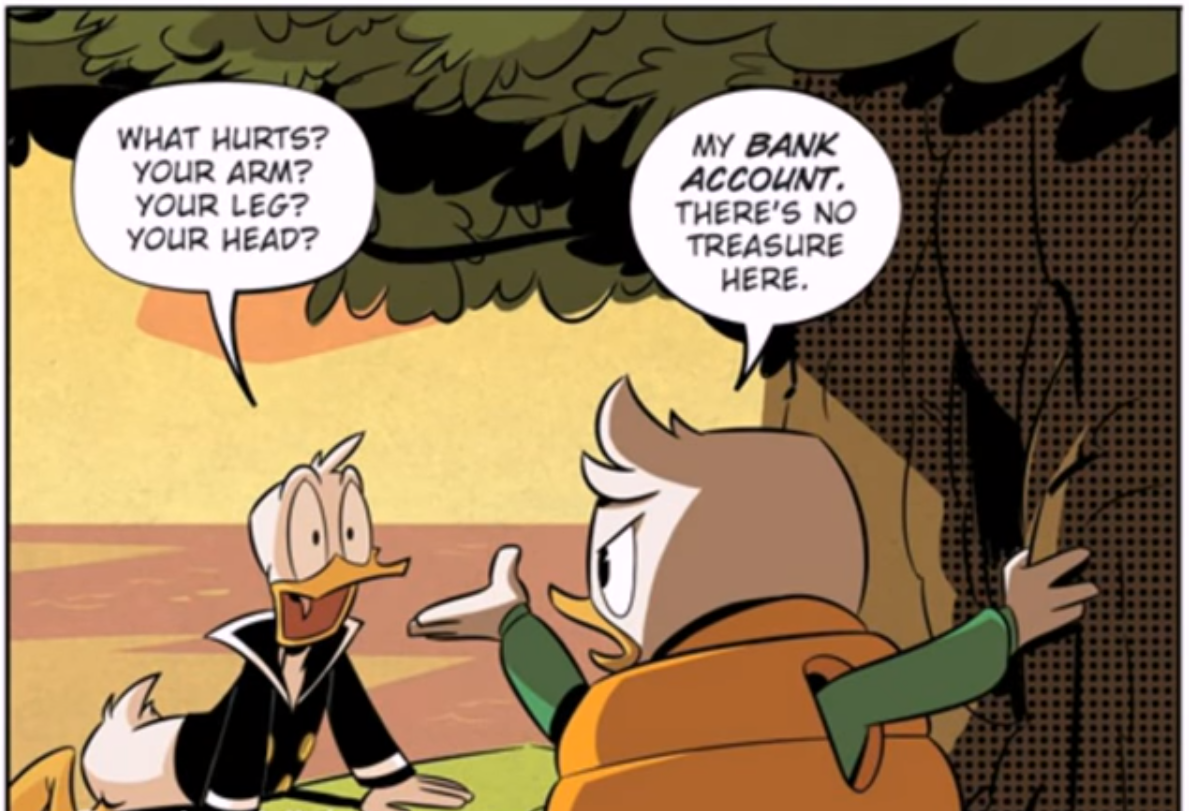 To him, it was all about finding money. The only risks he’s willing to take are risks to make a quick buck.

Maybe Louie was more aware of how close they were to the poverty line than Huey or Dewey. He’d seen the pattern plenty of times. Uncle Donald loses a job, he gets a new one, he gets paid a couple weeks later, things are okay again for a while, and then Uncle Donald loses his job again.

Maybe Donald would skip meals sometimes to make sure the boys had enough. He might have said things like, “I had a big lunch at work today, so I’m not hungry,” but as Louie approached him at the sink with his empty plate after dinner, he’d have noticed his uncle’s stomach growling. Or maybe Donald would say, “It’s healthy for grown-ups to fast sometimes, but you’re still growing. Eat up!” but as Donald shooed them off to their room to do their homework after dinner, Louie would look over his shoulder and catch a glimpse of Donald eating whatever scraps the boys left on their plates. And he’d notice the pattern that this kind of behavior was always right after Uncle Donald lost a job, or just before he got his first paycheck at his new job, right as the money was running out.

A lesson Louie could have taken away (though he didn’t) was that no matter how bad things get, keep going and everything will turn out alright (a lesson he finally began to understand in “The House of the Lucky Gander!”).

Instead, younger Louie misinterpreted his uncle’s rotten luck as the futility of hard work – a lesson Scrooge has been trying to have Louie unlearn since he met him. Louie clearly saw his Uncle Donald working hard and for very little reward. If Uncle Donald was busting his tail feathers at all these jobs and still had to skip meals… what was the point of hard work?

So Louie became fascinated with scamming practices and fantasized about get-rich-quick schemes. An honest day’s work hardly ever gave his uncle an honest day’s pay – or at least, consistently working hard didn’t lead to consistently making money. It was scary enough being a kid completely dependent on an unreliable source of income. He didn’t want an adulthood like his uncle’s.

Huey might have heard Donald’s excuses and gone right to the internet and discovered that yes, occasional fasting can have health benefits for some adults. Dewey might have quickly forgotten about what his uncle said as his mind drifted to a million other things, from how much he hated homework to how much he craved adventure, but Louie would have taken this newly recognized pattern, internalized it, replayed it in his mind, and vowed to never fall into the same trap of poverty.