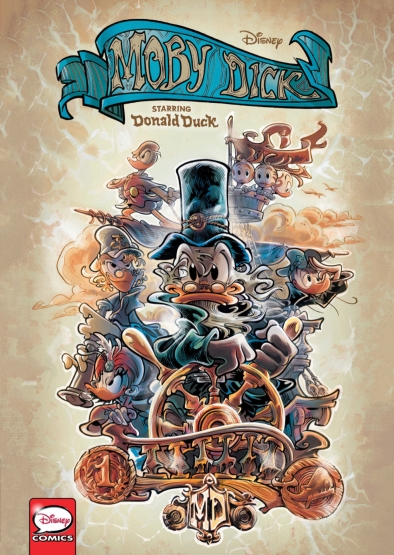 Dark Horse comics have began to produce Disney comics in the form of classic novels.  A few months ago we reported a list of all the upcoming graphic novels that will be apart of this series. I finally got my hands on Moby Dick starring Donald Duck and couldn’t believe the detail that was brought to this story. The compic was scripted by Francesco Artibani and the art was from Paolo Mottura (an Italian Disny Comic artist known for drawing uncle scrooge and Ducktales comics). This 80 page comic follows some of the key points of the original story while bringing a bit of Duck flair. 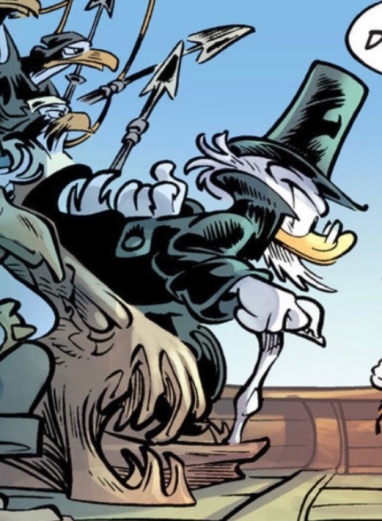 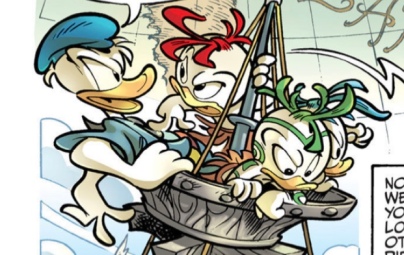 While I don’t want to spoil the story for those who do not know the original epic tale, I would like to point out a few neat Duck changes the author snuck in the story. In the original Moby Dick, Captain Ahab was obsessed with the white whale for destroying his fleet of ships and the loss of his leg. In this tale we find out that the white whale destroyed one of Captain Quackhab prized ships called the Glittering Goldie (If you were thinking is that the Goldie who Scrooge has an on and off romance with? Yes, that Goldie!).

Not only did the whale destroy his ship but he ate Captain Quackhab’s most prized possession. His number one dime! He attributes the whale for taking all his luck when he ate the dime and will stop at nothing to get it back.

The story is broken down into two Acts. Part one focuses on the ship setting sail and searching for the white whale. Part two is about finding and hunting down the whale. While reading two acts that may seem daunting, the story is filled with many of Donald clumsy gags and providing the reader the right amount of action to keep the story interesting.

While the comic does a great job at following the original story and adapting it to the Ducktales universe. It does take a few liberties with the story to give it a happier and more kid friendly ending. This is totally understandable as it is designed for a younger audience and produced by Disney. I believe the series of comics which depicts classics books like Moby Dick are a great way to introduce these titles to young readers. Additionally, for the more experienced Duck fans there are also of hidden gems for the fan community to spot throughout the story that will keep you interested in this comic.

Also we would like to thank the people using the amazon links as the support provided by you allowed us to purchase this comic for review.