IDW has a couple of Disney Duck comic books releasing this week. This week’s DuckTales #18 and Uncle Scrooge #42 will be available on comic stands and online. Below you will find each issues description, covers, preview’s provided by IDW, and our reviews.

It’s a special 20-page story as we present “Money-Grubbing Hooligans from the Deep!”A tsunami is about to hit Duckburg, but a mysterious submarine may be the reason behind this unexpected occurrence. Find out how the occupant of the submarine is connected to Launchpad McQuack, and if Uncle Scrooge’s Money Bin will survive the watery onslaught!

IDW’s DuckTales series has been a favorite of ours from the beginning. In the early days of the book (it started with a #O) we were introduced to the Duck family before everyone came together. After a few issues that took place before the television series began the book moved to stories about Scrooge, Donald, and Della adventuring. These stories provided readers an introduction to Della that I think makes her quick appearances in the show more meaningful. IDW has released these issues in TPBs that you can find at your local comic shop or online. 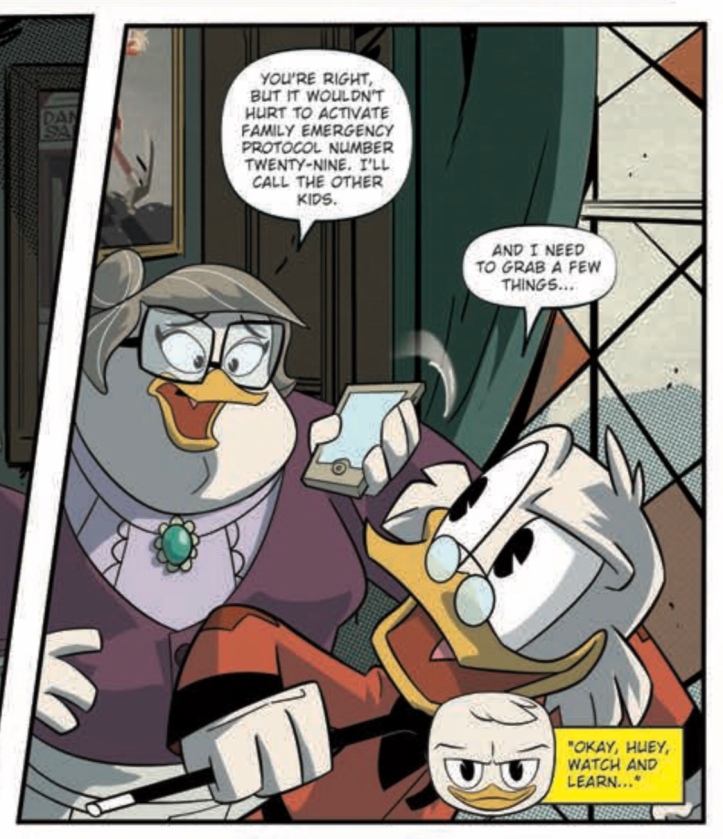 But that was them, and issue #18 is now! The comic eventually caught up to the series and we’ve been witnessing adventures the family has experienced between the episodes of the show. If you remember the season 2 pilot indicated the Duck/McDuck family had taken very few breaks between adventures.

Issue #18 does find the family at home in Duckburg, and the story begins during a… hiatus from adventuring. Everyone is spread across town, but an unexpected visitor causes everyone to come together.

I love how Joe Caramagna writes these characters. It is true to the characters we watch on the show. I can honestly hear the voice actors reading these lines. The story is fun, and we do learn a little more about Launchpad. I will say the story went exactly where I was expecting, but it didn’t end the way I expected.

The art in this comic is very expressive. The characters are always on model in this book. The art is very vibrant and tells the story well.

If I were to express one disappointment in DuckTales it would be that the comic book may be too restricted by the show. I love that there is a comic that sometimes adds to the experience of the show, but sometimes I wonder how a story might be different if they had more freedom with these characters. I have no doubts that the book will continue to get better as the story working the show expands (fewer hiatuses wouldn’t hurt).

Two new stories full of adventure and mayhem await in this latest issue! In “The World of Ideas,”Gyro Gearloose’s latest invention allows Uncle Scrooge and the nephews to experience reality in a way they’ve never done before—with (almost) un-chaotic results for Uncle Scrooge! Then, in “Fast Food Duck,”Donald takes a job at a burger joint in order to raise extra funds for his nephews’ upkeep. Needless to say, things don’t go quite as planned!

The description for this comic says there are two stories, but the issue I was provided only included “The World of Ideas” I love the Italian Duck comics. I think the stories are fun and I love the artwork.

This story reminds me of a Don Rosa story. The premise of the story is science fiction, but it is grounded just enough to prevent you from dismissing it entirely. This may be my favorite story from these comic books so far.

I’ve already expressed how much I enjoy the art in these comic books. I love how expressive they are, and how colorful the pages are. While reading the book I could tell it had been created in the 90s because the coloring has that very limited style that reminds me of reading comics as a kid.

I enjoyed Uncle Scrooge #42 and recommend it for any fan of the character.

Another great week of comics for DuckFans. Let us know how you enjoyed DuckTales #18 and Uncle Scrooge #42 in the comments below or on Twitter @DuckTalks.