Here is the cover of the original comic which matches the cover artwork that Fantagraphics used for their cover. 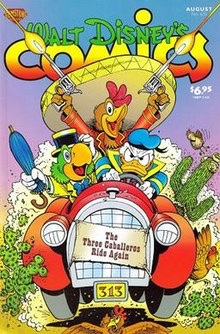 In Don’s story, The Three Caballeros Ride Again!, Donald is in Mexico with his nephews for a Jr. Woodchuck Jamboree. Huey, Dewey, and Louie feel bad for their uncle because they think that he does not have any friends. Donald surprisingly runs into his two best friends from long ago, Jose and Panchito. Jose is a performer at a local club, and Panchito is in town because he is in possession of a map to the lost city of Tayopa. Tayopa was a silver mining town. The three of them go on a treasure hunt for the silver. Beware the man in the yellow sombrero who is after Jose for flirting with his wife and Panchito’s map to the silver.

Don Rosa’s second Three Caballeros comic story is titled The Magnificent Seven (Minus Four) Caballeros, and it can be found in Fantagraphics’ The Don Rosa Library Vol. 10: The Old Castle’s Other Secret.

Here is the cover of the original comic, Walt Disney Comics

The Magnificent Seven (Minus 4) Caballeros! is an absolute gem in this volume’s collection. Here we are treated to Don Rosa’s second story featuring the Three Caballeros. Huey, Dewey, and Louie notice that Donald has lost his smile. They send him to Rio de Janeiro, Brazil to deliver some Jr. Woodchuck badges, but their hidden agenda is that Donald meets up with Jose and Panchito after he delivers the badges. The Three Caballeros go on an adventure through Brazil that leads to them being heroes by stopping a wildlife trapper, and they end up discovering a mine of jewels. Did I mention they battle an enormous anaconda? Well they do and it is awesome.

I really wish Don Rosa would have made more stories featuring Donald Duck, Jose Carioca, and Panchito Pistoles as a whole volume of Three Caballeros adventures would have been an epic read.

If you are interested in either of these Don Rosa Library volumes, you can order them at the links below. You can buy them individually or as a box set with both volume 9 and 10. It is also worth noting that all of the other stories in these two volumes are wonderful as well and among my favorites.

The Don Rosa Library Vol. 10: The Old Castle’s Other Secret