Jerrod Maruyama is one of the talented artist appearing at Epcot’s International Festival of the Arts. His wonderful Disney art can often be found in any shop that sells art all over Walt Disney World and Disneyland. His art style is making really cute character designs of everyone’s favorite characters. He also sells non Disney art that I suggest you follow his twitter account (@jmaruyama) and his website for the latest info on all of his creations.

I have been a long time fan and admirer of Jerrod’s work. I have always wanted and frequently suggested/requested/begged that Jerrod would tackle some of the Disney Afternoon franchises in his art style. That dream finally came true when Jerrod announced the pieces of art that he would debut at the 2019 Epcot’s International Festival of the Arts.

Afternoon of Cute is available for purchase at the Wonderground Gallery Tent near the foundations at Epcot’s International Festival of the Arts. The art options are Postcard ($4.99), Deluxe Art Print ($39.99), and Limited Edition of 195 Canvas ($175).

The art may show up at other Disney Parks art locations at WDW and Disneyland Resort, but that has yet to be confirmed and would be sometime after Epcot’s International Festival of the Arts.

I had the pleasure of meeting up with Jerrod to purchase some art at Epcot’s International Festival of the Arts. 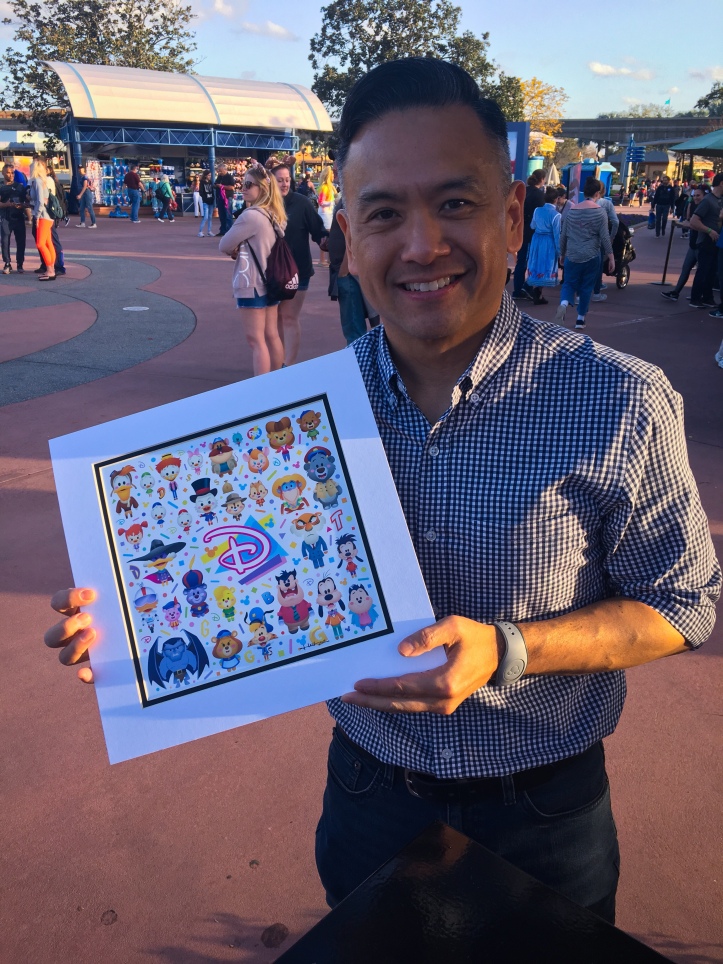 Jerrod signed the Afternoon of Cute Deluxe Print that I purchased as well as a postcard. 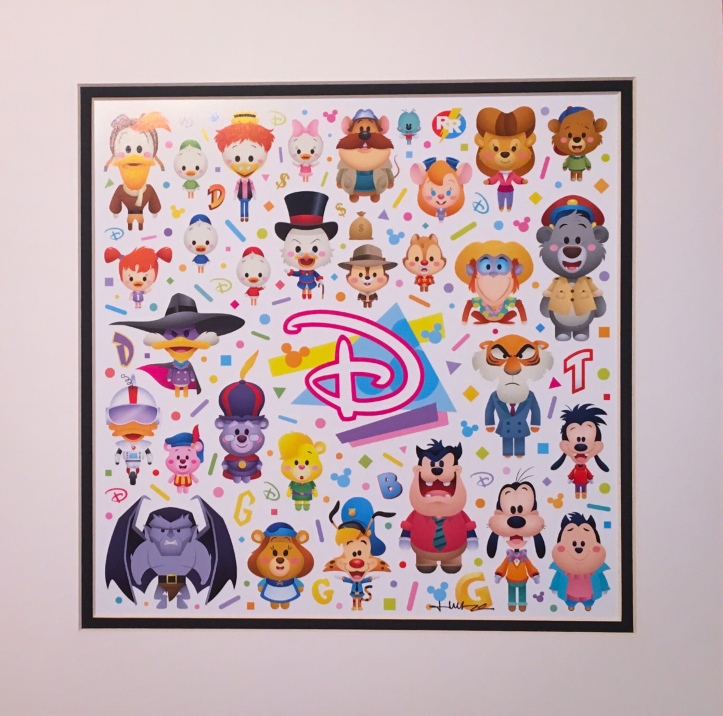 Here is the Deluxe Print hanging on my wall. The matted print is size 14 x 14. This is probably a new personal record for me in terms of how fast I went from purchasing art, framing art, and hanging art on the wall.

Jerrod was nice enough to do a quick interview for our blog.

Thank you for taking the time to do an interview with us.

What is your favorite Disney Afternoon show?

DuckTales was probably the one I watched the most back in the day. But there’s much to love about all of these shows. I was a little older when most of these cartoons originally ran so I have less nostalgia for them and more of an appreciation in general. Always loved the design of Darkwing Duck in particular. So my affection for these shows is more out of an appreciation for animation than a fond memory of my childhood.

Who is your favorite character on your “An Afternoon of Cute” piece?

Were there any other characters that you wanted to add to this piece that did not make the cut?

There are so many DuckTales characters that I wanted to include. That show could really have its own piece dedicated to those fantastic characters.

Have you done any art for the new DuckTales show yet?

Just a fan piece while back when the new designs were first revealed. Love the look of the new show.

I love your Star Wars Small World print “It’s A Small Galaxy After All”. Any plans on taking on any other attractions with Star Wars themes?

I am always willing to do new Star Wars art. We’ll see what the future holds. Nothing currently in the works.

One of your most popular pieces is your Hipster Mickey. You have also done a Hipster Minnie. Donald is pretty hip. Any chance for a Hipster Donald?

No plans for further Hipster characters. Just keeping to Mickey and Minnie is nice. Prevents us from over doing it – even as fun as a Hipster Donald sounds. But I will never say “never”! 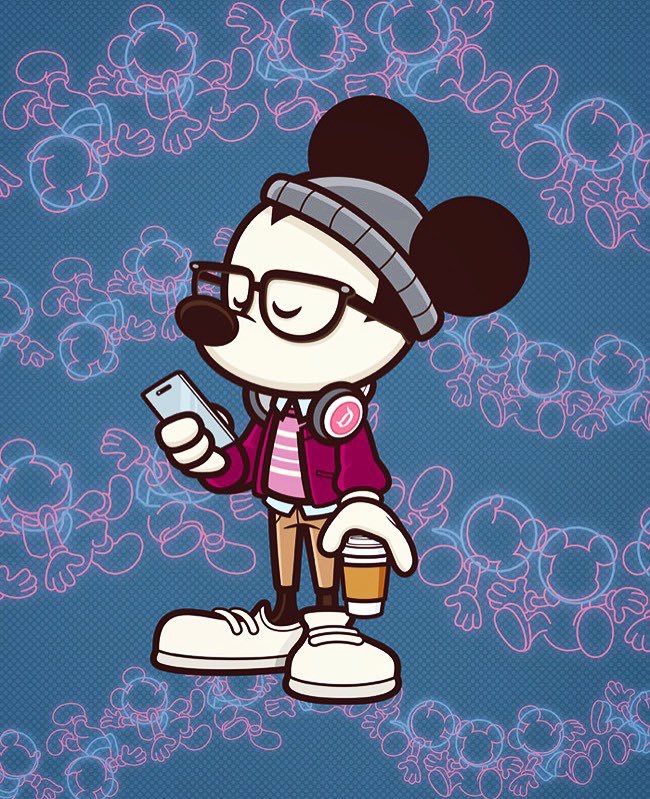 Disney turns a lot of your art into merchandise at the parks. What has been the biggest surprise Disney merch that you have seen your artwork on?

I don’t know that anything is surprising. I love that entire sets of vinyl toys exist. That wasn’t something I had assumed would become a reality. Seeing those toys and the fantastic response they received was really satisfying. Also, I must say – seeing my artwork on balloons in Disneyland was a much more emotional experience than I had anticipated. Always nice to be in the parks.

I know very little about Kingdom Hearts. Mostly interested in the art as I am not much of a gamer. LOVE the concept and it’s always exciting to see what worlds and characters they will include. But probably won’t play the game. Just enjoy seeing them translate the characters to that style.

Our audience is full of collectors. I noticed from the pictures that you posted on social media that you are a collector yourself. What do you collect?

At this point, I collect what I like. I don’t have a set of rules or a particular character that I collect – though it’s been a lot of Mickey lately with all the 90th merchandise. It’s all about the aesthetic of the thing. If it’s nicely designed or I just like the look of it, I’ll pick it up. But that can quickly get out of control so sometimes I just have to enjoy seeing it or taking a photo. Only so much room in my house.

Thanks again for your time.

Jerrod’s Afternoon of Cute Art and his other three newest pieces can be picked up at Epcot’s International Festival of the Arts through February 25th. 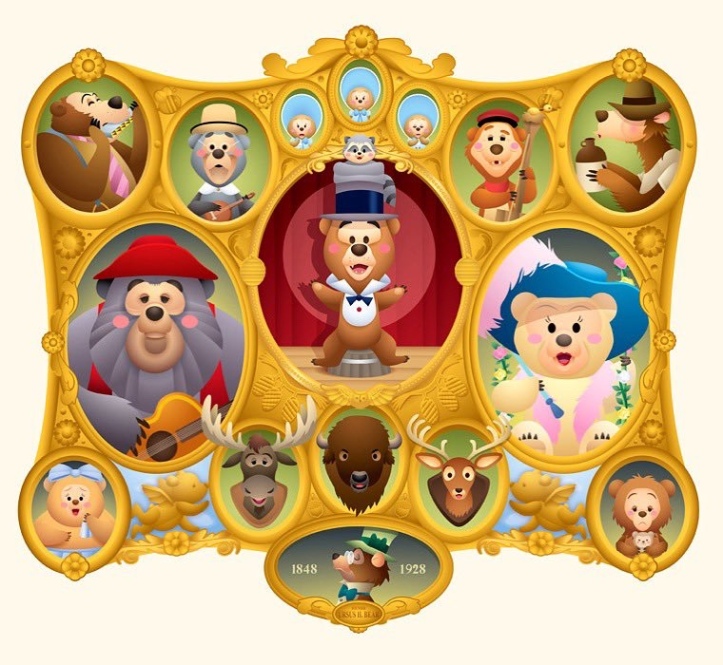 Be sure to follow Jerrod on twitter @jmaruyama and check out his podcast @squaredco so that you don’t miss any information on upcoming art releases or fan art.