Thanks to @AwPhooey2U and @ExAniron we woke up this morning to more images, a description, and a new release date for “Last Christmas!”

Disney’s press had “Last Christmas!” scheduled for release on Friday 11/30. Although odd, we didn’t really question it because they have moved DuckTales around on the calendar more than once (at least when it was on Disney XD). But it looks like that was a mistake or a placeholder. The episode will air Saturday 12/1 at 7:30.

We also received an actual episode description. Before I share that (because it’s shocking). Here are the images released so far. 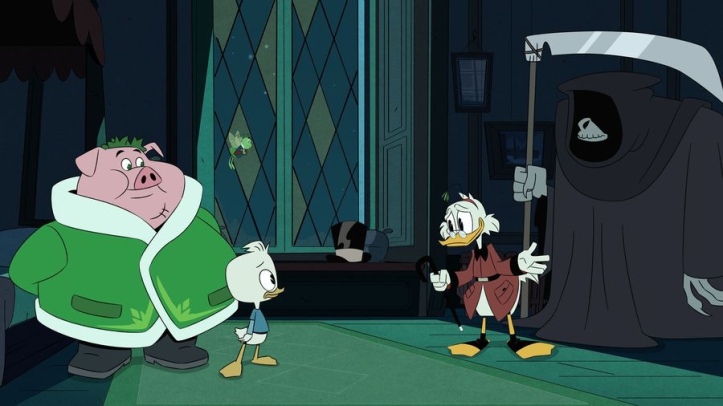 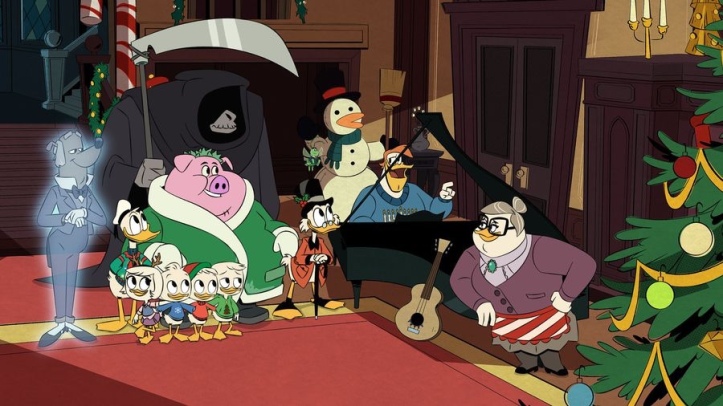 We had a discussion on that group image during the recording of our last DuckTalks podcast (Episode 48, should be out later today). The two newer images offer us a better look at the Ghosts Of Christmas. Everyone has been speculating influences of Mickey’s A Christmas Carol and the episode description confirms this. is Scrooge wearing mistletoe over his head?

In a nod to “Mickey’s Christmas Carol,” Scrooge avoids the pressures of the holidays by traveling back in time with a trio of fun-loving ghosts to crash history’s greatest Christmas parties instead. Meanwhile, time-lost Dewey teams up with young Donald Duck to find his mom on Christmas.

The story centered on Scrooge was expected, but we were not expecting another story with Dewey stuck in time looking for Della! Sounds like the Christmas episode we should have expected!