Three Questions We Hope Get Answered in Season Two

From the first time the DuckTales theme got stuck in your head and made you cheer “Woo Ooo!”, the show has promised a few things. One of those things being that – over the next thirty minutes – we “might solve a mystery.”

The 2017 version of DuckTales loves to include some serial storytelling, drawing out plots across multiple episodes, enticing us to speculate until we tune back in the next week, hoping to find some answers. And, while the Season One finale did a good job at tying up the season as a whole, it still left us with a few unsolved mysteries that we hope get explored more in Season Two when it premieres October 20.

Let’s take a look at three lingering questions I hope get answered sooner, rather than later.

Let’s start with the biggest mystery Season One left us with.

After hearing about her and learning a bit about her as Huey, Dewey and Louie explored an evolving mystery about their mom in Season One, we’re left with a cliffhanger that Della is on the Moon… and we don’t know much more than that.

We know Scrooge helped oversee the project that launched Della on her space mission. We know he spent most of his fortune to try and find her after she disappeared. But we know nothing about what happened to her or how she got stuck on Earth’s only natural satellite.

It stands to reason that Della’s story is far more involved than being stuck on the Moon for years. If she has been, then Scrooge better get a refund on all the money he spent trying to find her, since she was literally on the closest object to the planet.

So, where has she been? What has she seen? How has she made it this far back but not all the way? There are plenty of stories to tell here, and I can only hope we get to spend a lot of time finding out about her journey, be it in multiple episodes, comics or some other medium.

2) Where did Magica run off to?

While Della’s story intermingled with Season One as a whole, it quickly became apparent that Magica DeSpell was the real villain of the season. This led to the ultimate rematch between her and Scrooge (this time with his family and friends in tow) during the finale.

Magica had won, but that didn’t stop our daring ducks from defeating her and setting order back to Duckburg. But where did she go after she lost?

In what seemed like an odd moment during the final minutes of the finale, Magica just seems to run off? Her feathers have gone from green back to the white we’re accustomed to her having. Her magic seems to be gone as well, after Scrooge reclaims his Number 1 Dime from her.

It’s great to know she’s still out there and will probably come back at some point to reek havoc on Duckburg in her eternal vendetta with Clan Scrooge. 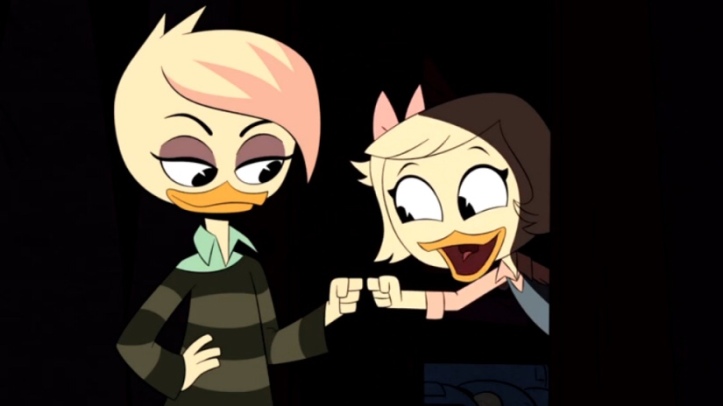 Magica isn’t the only one to mysteriously disappear at the end of Season One. In a pretty shocking twist, we learned that Webbie’s best friend Lena isn’t just Magica’s niece, she’s a creation of Magica.

In the final showdown, we see Magica zap shadow-Lena out of existence, but after Dewie reminds Webbie, “She’ll always be with you,” Webbie’s shadow takes the form of Lena for a brief moment.

How did Lena end up in Webbie’s shadow? What does this mean for her character? Can she regain her physical form? After the best friends now closer than they’ve ever been – literally?

Lena was a fan favorite addition to this new version of DuckTales, so we can only hope her story doesn’t end there.

The Future is Unclear

Let us know in the comments below or join us on Discord, where we’re always have some great conversations about our favorite Disney ducks!