The Lost Peg Leg Mine Review 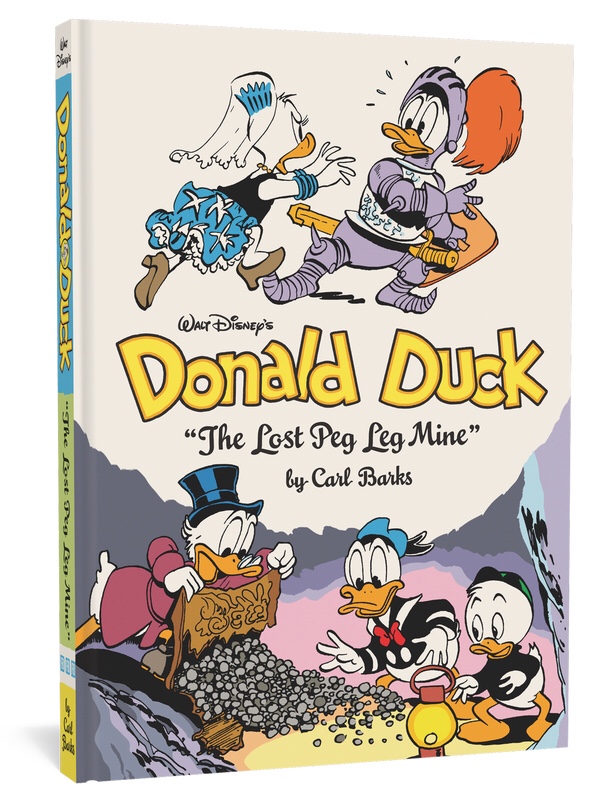 The Lost Peg Leg Mine

The Complete Carl Barks Disney Library Vol. 18: The Lost Peg Leg Mine was released by Fantagraphics in April 2018.

The illustrations that make up the cover of this book are from two different stories. The top image is from Knights in Shining Armor. The bottom image is from Donald Duck and the Lost Peg Leg Mine.

This edition of the Carl Barks library is 192 pages, and it includes 17 stories that were published between 1956 and 1958. Each story is 10 pages long. There are also some supplement sections with a section about Carl Bark’s life as well as behind the scenes pictures and stories about each and every story that is included in this edition. It is like bonus features on a blu-ray, and it is full of great and interesting information. I am glad that it is included in this volume and every volume of the Carl Barks Library.

Carl Barks Library Vol. 18 is available in hardcover and Kindle\Comixology versions. A link to buy this book can be found at the end of this review.

The next book in this series Carl Barks Library Vol. 19, The Black Pearls of Tabu Yama, will be released in September 2018.

There are 17 Disney Duck stories included in The Lost Peg Mine:

The first story in this book is the title story, Donald Duck and the Lost Peg Leg Mine. Scrooge McDuck, Donald Duck, and the nephews go to the desert to look for two satchels of gold.

The Master is a story where Donald tries to prove to his nephews that he can master any job by getting a job as a fish culture expert at a salmon hatchery.

A Whale of a Story is a story about Donald trying to create a whale viewing park.

Smoke Writer in the Sky is a story where Donald has a job advertising for businesses by writing their names in the sky. His latest and last client is Scrooge McDuck.

The Runaway Train is a story where Huey, Dewey, and Louie use their Jr. Woodchuck skills to try to stop a train collision. Will they save the day or will Donald take all the credit? Why not both?

Statues of Limitations is a story about a snow statue building contest in Duckburg. Donald and his nephews try to both help a less fortunate family win the contest.

Borderline Hero is a story about Donald working on the border patrol team. Donald Duck has officially had every job imaginable.

Knight in Shining Armor is a story where Donald gets gets invited to a costume party where the guests need to dress in a costume of something they have always desired to be. Donald chooses to be a knight which seems to be out of style with the other party guests. Donald proves that knights are always in style.

Fearsome Flowers is a story where the nephews ask Donald for help with their homework. The subject matter is types of flowers for which Donald claims to be an expert. When he proves not to be an expert, Donald goes overboard as usual and plants as many flowers that he can find inside and outside his house.

Donald’s Pet Service is a story where Donald and the nephews start a business of taking care of people’s pets while the owners are on vacation. All of the people that have signed up have unusual pets that lead to funny results.

Losing Face is a story about Donald having a job cleaning a sculpture of a senator’s face that is on the side of a mountain.

The Day Duckburg Got Dyed is a story about Donald working for the water company and then the family having to move to Timbuktu.

Gyro’s Imagination Invention is a story about Gyro letting Donald and his nephews use a machine that will take them to the places that Donald imagines. Donald’s imagination can only think of normal every day things in bigger sizes.

Red Apple Snap is about Donald’s dream to win a prize at the fair with the biggest and best apples in Duckburg. His new next door neighbor, Gladstone, also happens to have an apple tree. I wonder who will win this one.

Special Delivery is a story about Huey, Dewey, and Louie getting a job delivering packages. Their first delivery is a house with a lion for a pet.

The Code of Duckburg is a holiday story where on Christmas Eve, Gladstone gives Huey, Dewey, and Louie the reindeer that they wanted to pull their sleigh up and down the hill. Now they just need to convince Donald to let them keep it or they could use the Code of Duckburg which states the gift recipient must keep any present that they have received after midnight on Christmas Day.

I can’t believe that it has taken me this long to start reading the works of Carl Barks after being such a fan of his art and characters. Donald Duck definitely represents the blue collar worker as I feel like by the time I read through the rest of the volumes, I will have seen him work in every field and job possible. He really is a great father figure to his nephews even though they can get into their quarrels. All of these stories are consistently great. My favorite stories in this batch are The Runaway Train and Losing Face. The bonus content on Carl Bark’s life and the behind the scenes content on each story really completes this volume for a comprehensive experience. I can’t wait to read through the rest of the volumes in the Carl Barks Library.