Occupation: Captain of the Sky Pirates

Who is Don Karnage?

Don Karnage is the captain of a group of air pirates on a massive ship called the “Iron Vulture”. His first appearance is on the pilot of Talespin, “Plunder & Lightning“. Don Karnage became a recurring character, serving as an adversary to Baloo and his friends during the shows run. According to shows creator, Jymn Magon, Captain Karnage is a red wolf (likely a Maned wolf) with orangish-brown fur, left ear bitten, wears a blue captain’s coat with red and gold accents, light blue pants, and black boots. Don Karnage primary uses a cutlass to fight in hand to hand combat, which he wears on the left side of his waist. He speaks with an accent that is a

blend of Spanish, Italian, and French accents. His secret hideout, Pirate Island, is located inside a volcano somewhere near the coastal city. In the comic “Rise of The Pillager Queen”, it is revealed his deceased uncle was also an Air Pirate, which suggests he grew up as with pirates.

While being a criminal, Don Karnage believes himself to be a man of honor. In the episode “Stuck on You“, he saves Baloo instead of killing him due to the unfairness of the fight, and upholds his end of a truce between him and Baloo. Karnage conducts himself as a throwback to the image of a romanticized pirate from earlier times, dashing and debonair, but he’s still a ruthless 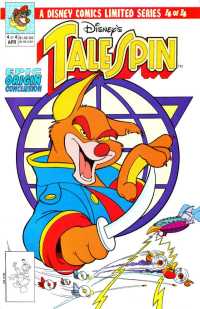 criminal. Captain Karnage is very egotistical, which often motivates his crimes, and leads to his downfall. He often is more cunning than his fellow sky pirates who are often short tempered and not smart.In an interview with Jim Cummings, it was stated that he is indeed clever, but that his emotions often cloud his judgement. 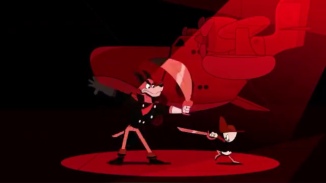 In Ducktales 2017, Don Karnage is set to make his appearance on “Sky Pirates… In the Sky!” on July 28, 2018. Now we don’t know much about the new version or how reoccurring Captain Karnage will be. We do know that he will stage a musical heist. Don Karnage has trained his crew to sing a fearsome Disney villians song that will confuse everyone watching it. While they are performing this well choreographed show, the piratees break in and steal victims valuables.

Tell us what you think about Don Karnage coming to Ducktales by continuing the conversation on twitter @Ducktalks.