Bare and grin it

Friends for life through thick and thin

With another tale to spin.

Continuing our series of reviews of the 2nd wave of the Funko Disney Afternoon Action Figure line, we have Louie from TaleSpin. 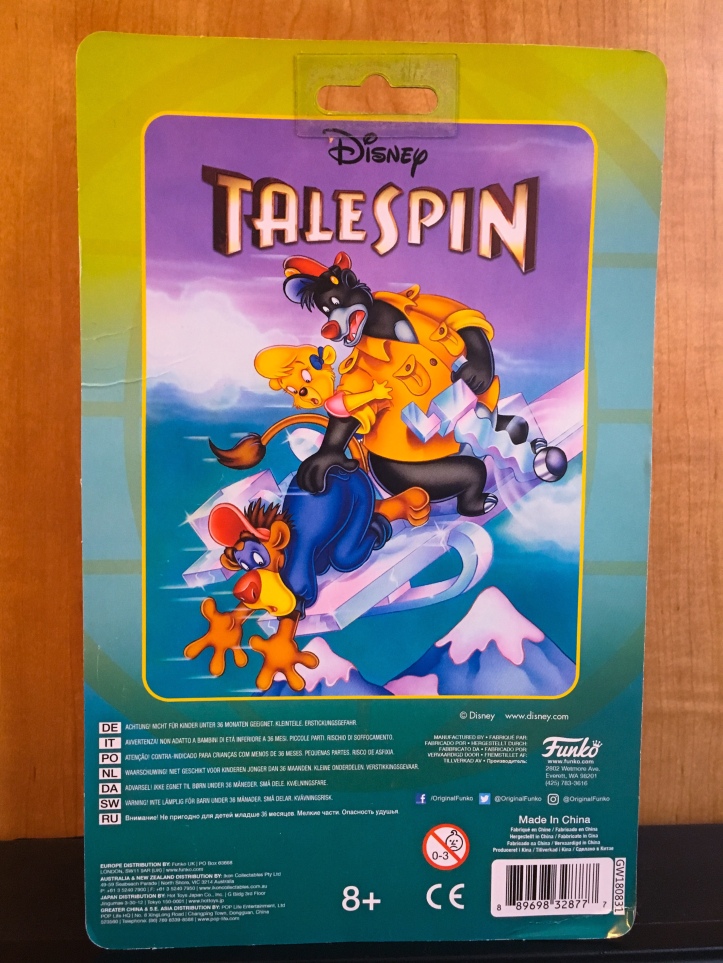 This Funko action figure release is not the first action figure for TaleSpin Louie.  In 1991, the toy company Playmates released a series of TaleSpin action figures and accessories.  Playmates also made a series of Darkwing Duck Action figures. The TaleSpin action figure series included the following TaleSpin characters: Baloo, Kit Cloudkicker, Louie,Rebecca Cunningham, Molly Cunningham, Colonel Spigot, Don Karnage, and Dumptruck.  A special 12 inch version of Baloo was also part of the series. Playmates also released Baloo’s Sea Duck plane and Don Karnage’s plane to go along with their action figure line.  I do not own any of these figures, but I may pick some of them up off of eBay one day for nostalgia reasons.  If anybody would like to send some my way, please do. 😉

Figure designs of Wildcat and two more of Don Karnage’s air pirate crew are pictured on the back card of the action figures. These figures were ultimately cancelled because Disney ended their licensing agreement with Playmates.

Just like the other action figures in the Funko Disney Afternoon action figure line, Louie’s figure comes on a card that has amazing box art.  Collectors will have to decide whether or not they keep the figure mint on card or open the package for more diplay options.  I choose to open the packaging for my figure because that is how I roll.

The back of the box features an image of Baloo, Molly Cunningham, and Wildcat from the TaleSpin episode Flight of the Snow Duck.

This colorful figure is a great representation of Louie in his Hawaiian shirt from TaleSpin. This figure has a similar design to the original Playmates action figure except the Funko version is more polished and detailed. The figure has eight points of articulation including head, arms, elbows, waist, and legs for high pose ability and movement.  I have no complaints on the paint job of this figure.  Louie’s hat is attached on this figure.

Funko has released multiple TalesSpin Louie figures. In 2017, Louie was a part of the Disney Afternoon Mystery Minis Series. His figure was exclusive to Toys ‘R Us. 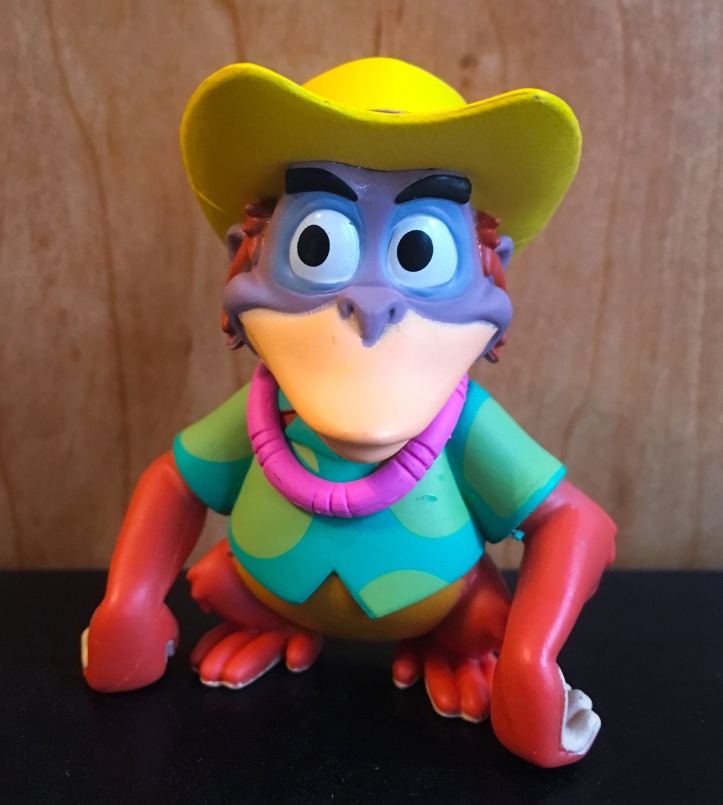 In 2018, Funko launched its TaleSpin line of POP figures. Louie had both a standard edition figure and a chase figure that portrayed Louie in a different colored Hawaiian shirt.

I highly recommend that you buy this Louie figure.  Louie is a great addition next to Baloo in the TaleSpin Action figure collection. I would love to see Funko add a Don Karnage, Kit Cloudkicker, Rebecca Cunningham, or Wildcat action figures to this line. Funko has released other products with those figures listed above except for Don Karnage. Boo!

Which TaleSpin character would you like to see Funko add to this series of Disney Afternoon action figures line?

All of the Disney Afternoon action figures look great together.

I can’t wait to see what figures will be added with future waves. Current releases missing from this picture: Launchpad, Gadget, Huey, Dewey, and Louie.

You can order either the TaleSpin Baloo or TaleSpin Louie Funko Action Figures from Amazon at the links below:

Both of these figures are highly discounted on Amazon at the moment.