I found out that Dark Wing beer existed from the man, the myth, the legend, DuckTales writer/producer…Frank Angones. 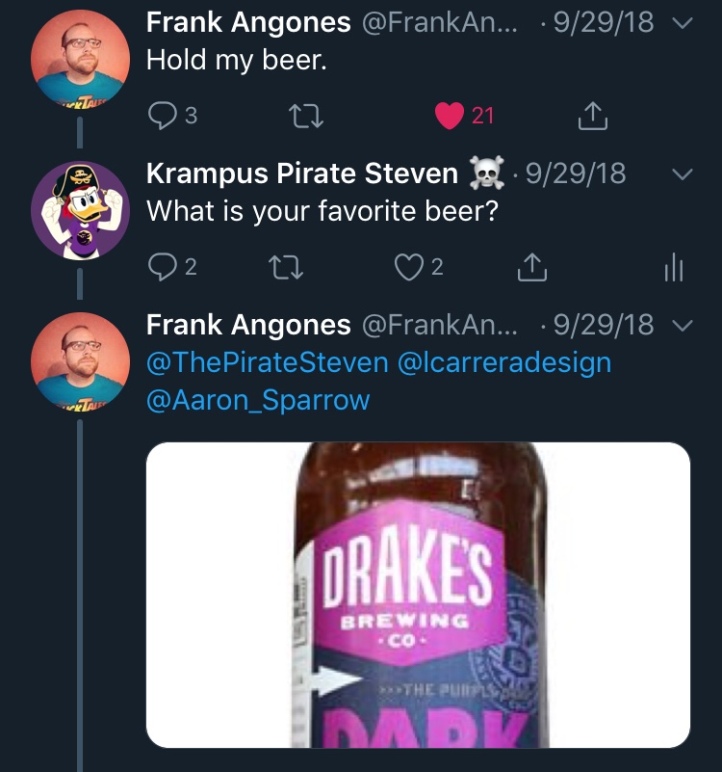 I did my research and found out that Dark Wing beer is made by an independent brewery called Drake’s Brewing Co. in San Alejandro, California. I made a new friend of DuckTalks with Brian from Drake’s Brewing Co., and he sent me a fresh six pack of Dark Wing Beer to showcase and sample and spread the good word of Drake’s and Dark Wing to our audience. It is a rough job, but someone has to do it.

For your enjoyment, I present to you an intimate photo shoot and review of Dark Wing Beer. As Darkwing Duck says, “Let’s Get Dangerous!”

This India Pale Ale limited release beer is usually brewed between October and December. We are treated to a generous 7.5 ABV (Alcohol By Volume).

The beer ingredients include:

I love that the coloring of the words on the Dark Wing beer carton match Darkwing Duck’s color scheme. 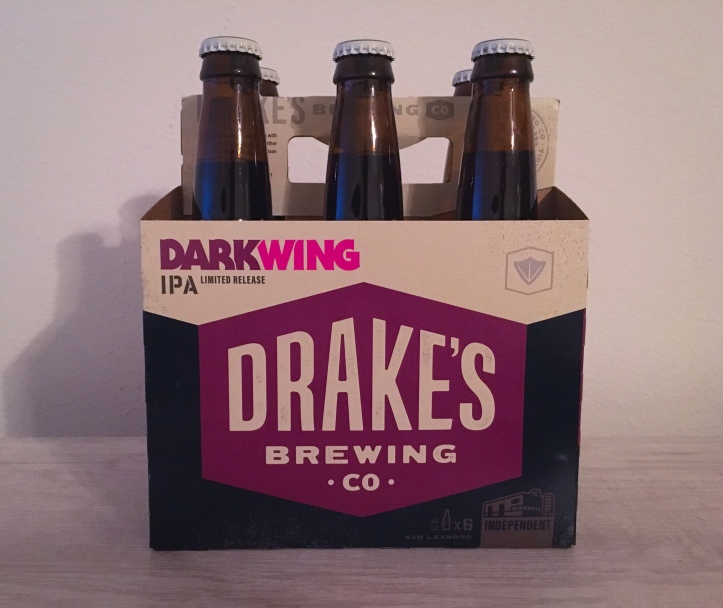 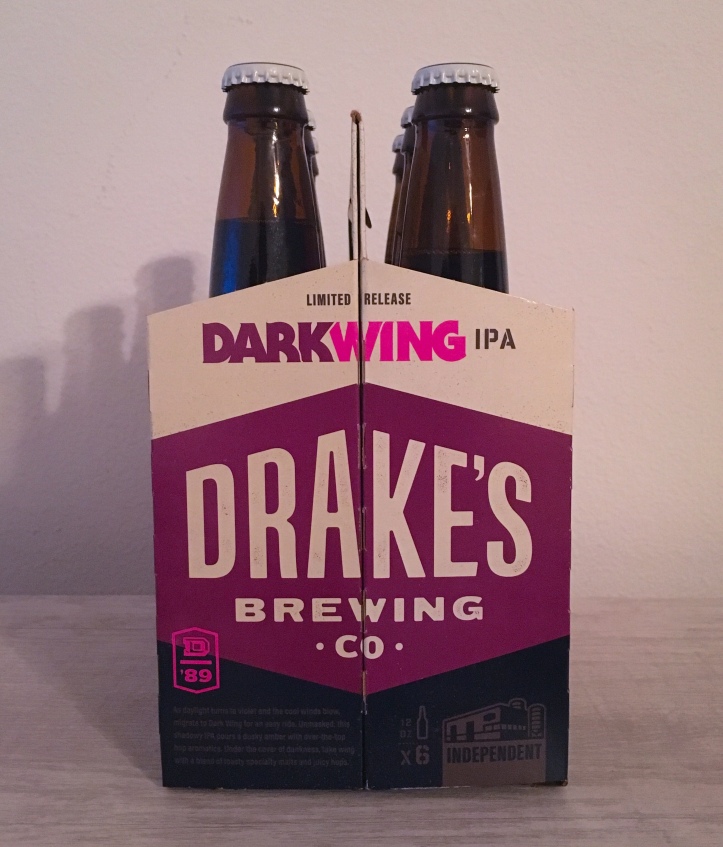 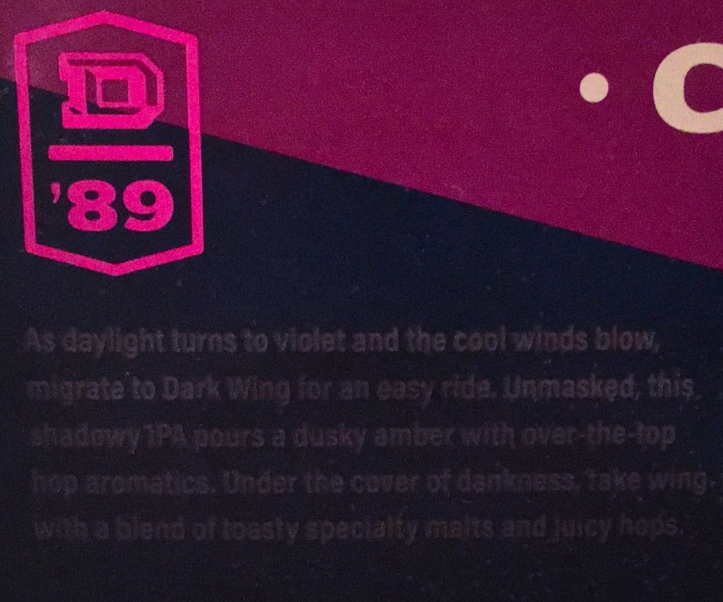 The Darkwingesque message on the six pack carton reads: As daylight turns to violet and the cool winds blow, migrate to Dark Wing for an easy ride. Unmasked, this shadowy IPA pours a dusky amber with over-the-top aromatics. Under the cover of dankness, take wing with a blend of toasty specialty malts and juicy hops.

The bottom of the six-pack carton has a game board for you to play bottle cap cornhole with your friends. 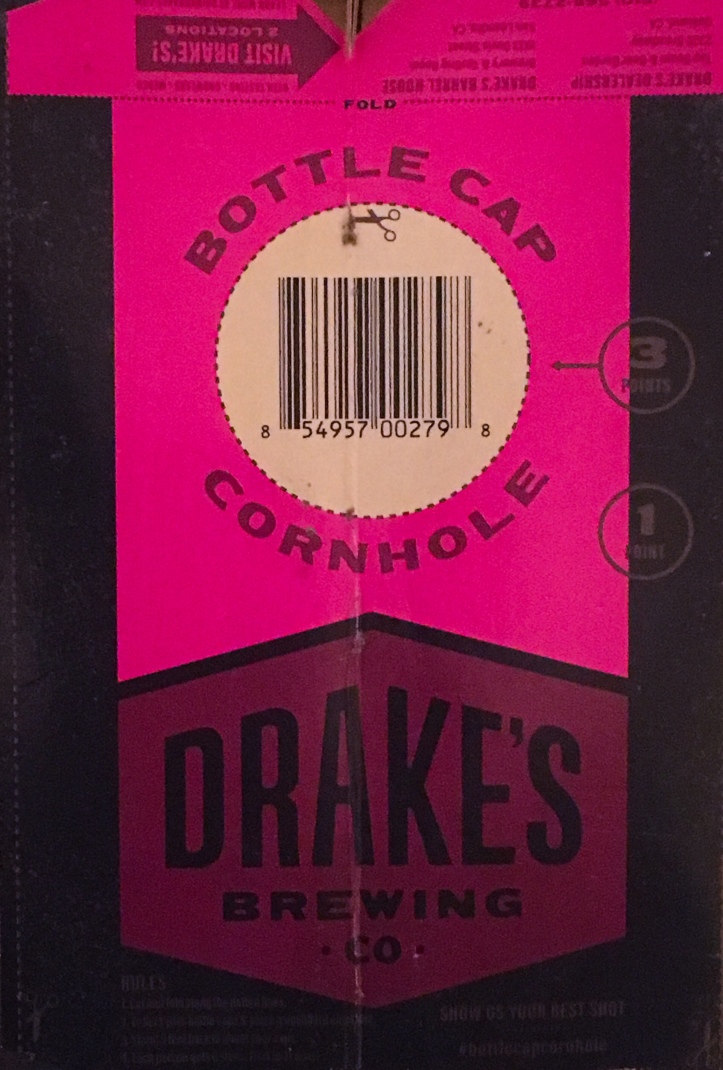 Let’s take a look at the bottles. Just like the carton, the great Darkwing Duck colors of Darkwing’s cape can be seen in the bottle label’s great design. The bottles speak for themselves, but I could definitely imagine a cape on these long necks. 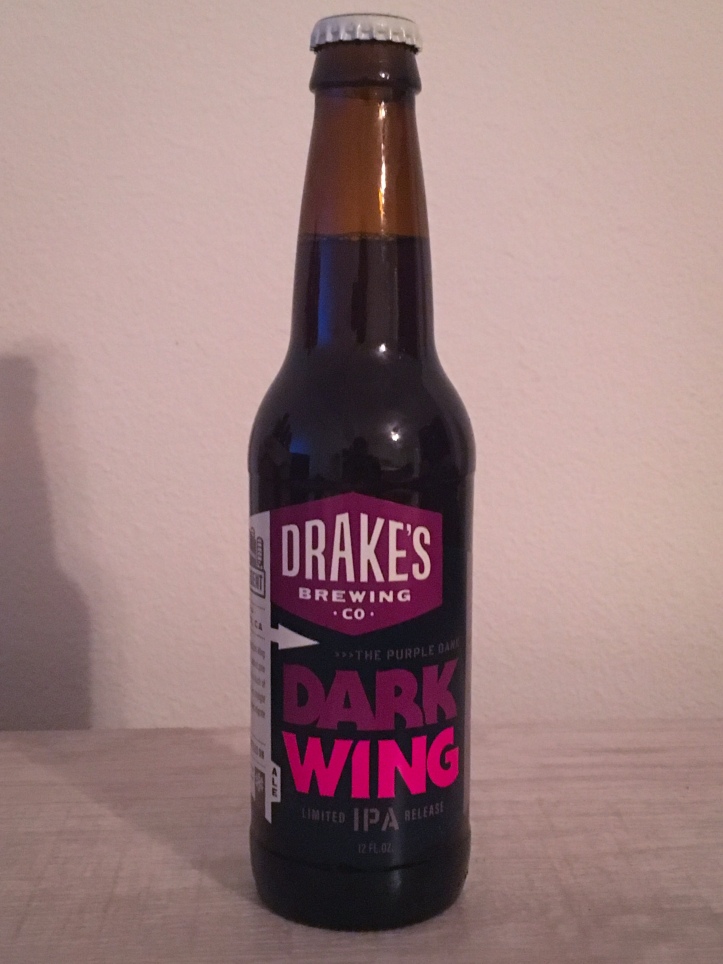 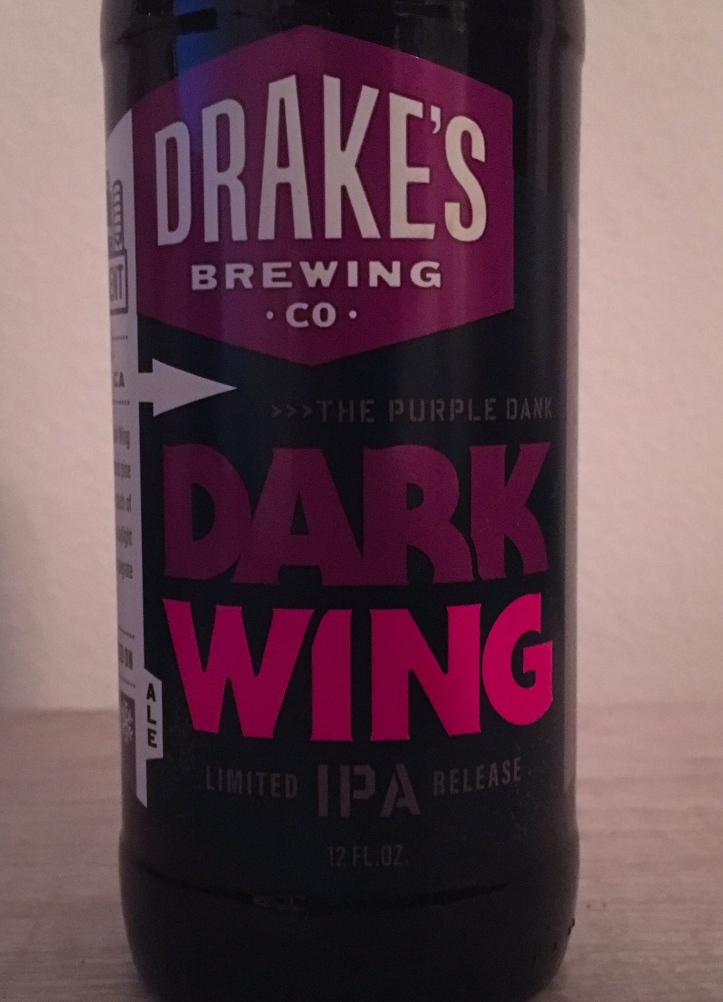 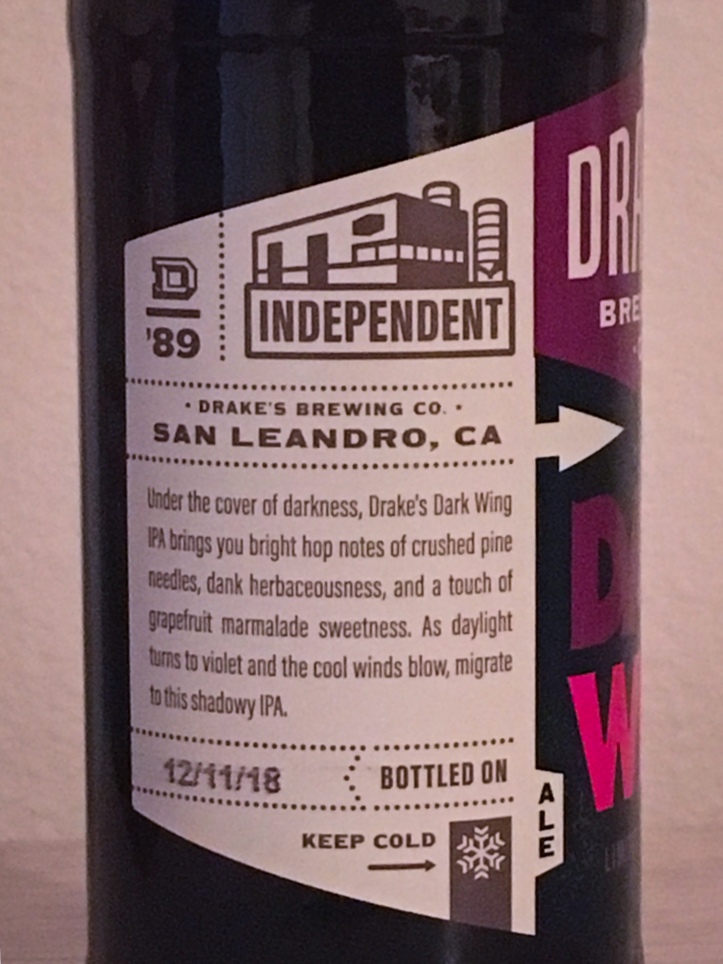 The six pack that Drake’s Brewing Co. sent me was from a fresh batch that was brewed this week. The message on the label reads: Under the cover of darkness, Drake’s Dark Wing IPA brings you bright hop notes of crushed pine needles, dank herbaceousness, and a touch of grapefruit marmalade sweetness. As daylight turns to violet and the cool winds blow, migrate to this shadowy IPA.

Check out the ducks on the bottle cap. 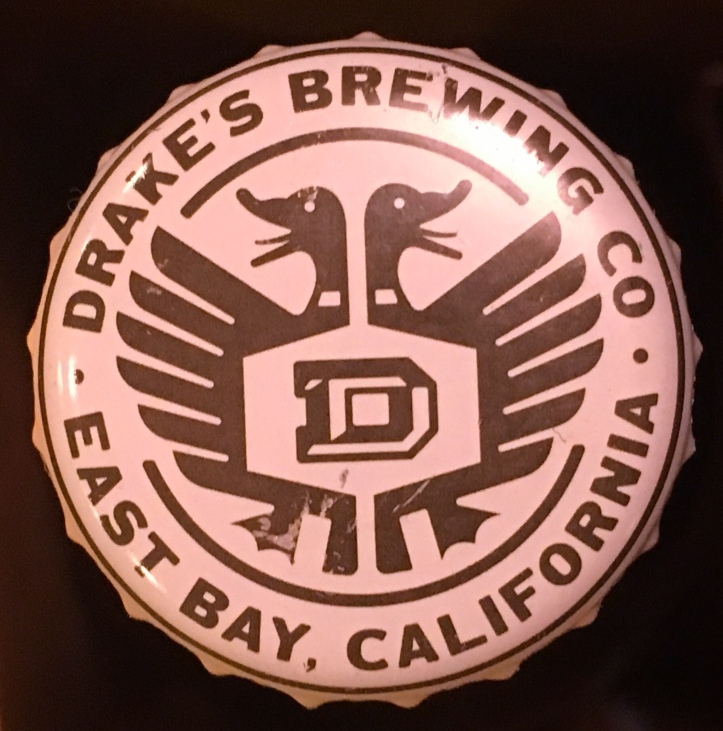 Overall I would have to give the packaging and bottles a 10/10 for presentation. I can definitely see Darkwing Duck fans getting a six pack to drink and a six pack to display with their collection.

Drake’s Brewing Co. also sent me a card with all of the facts about the Dark Wing Beer. This logo would look absolutely fantastic on a shirt. 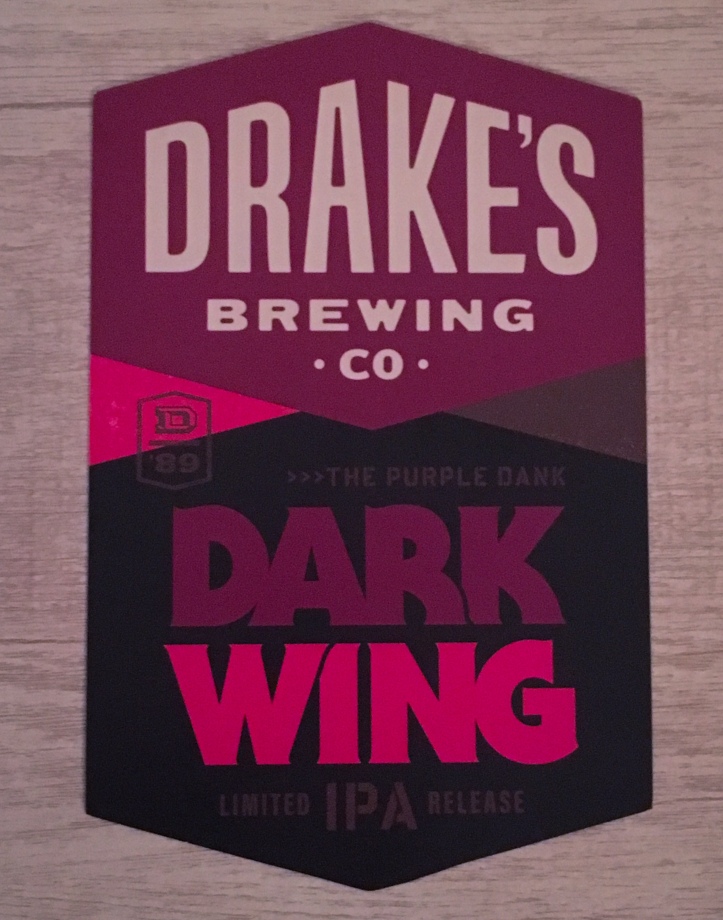 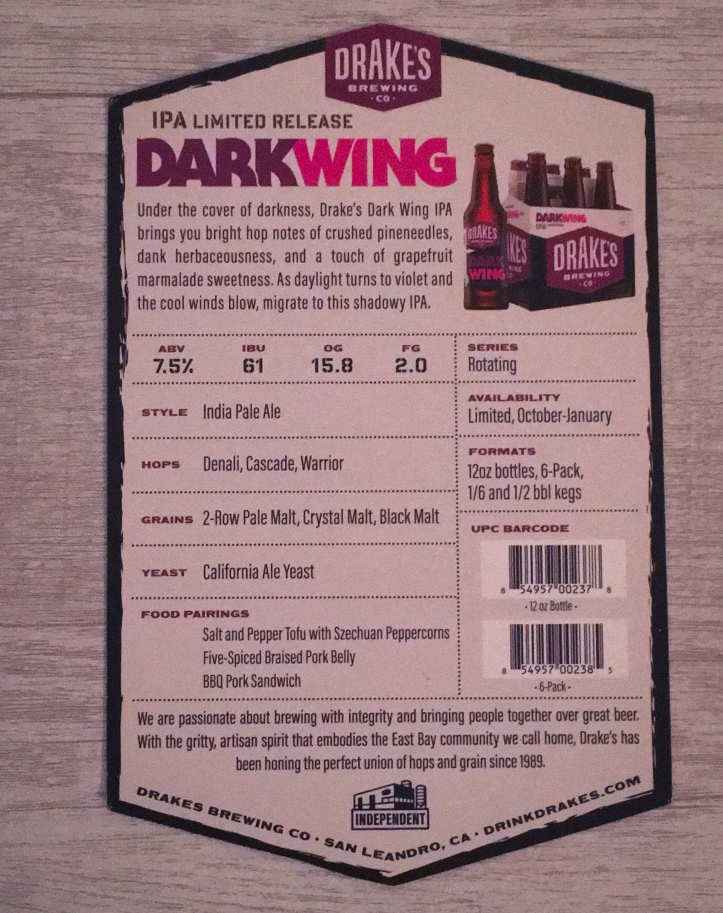 You can visit Drake’s Brewing Co. website for more information. This link we bring you directly to the Dark Wing IPA page.

I thought it would be fun to do a photo shoot with some of my Darkwing Duck figures posing with Drake’s Brewing Co.’s Dark Wing beer. Disclaimer: Dark Wing Beer has no affiliation with Darkwing Duck or the Walt Disney Company. 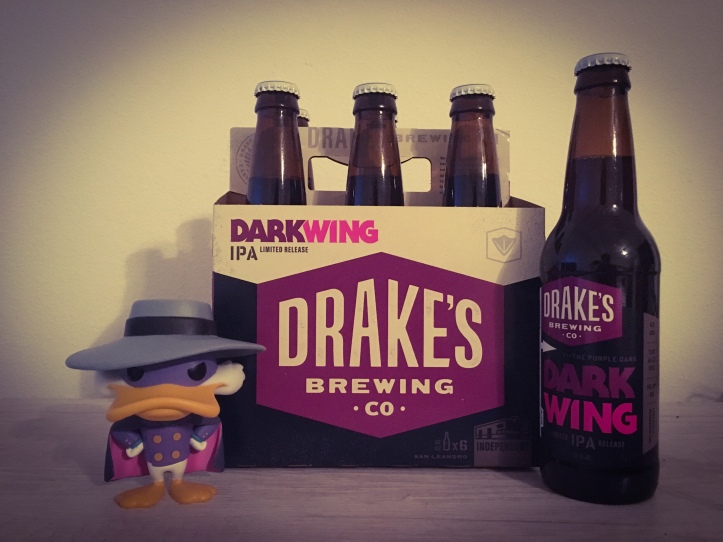 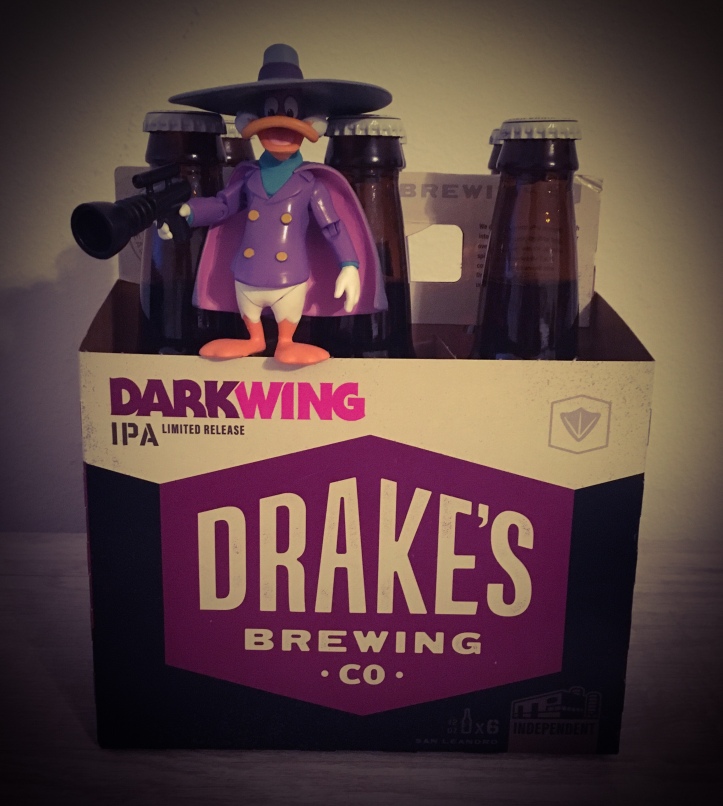 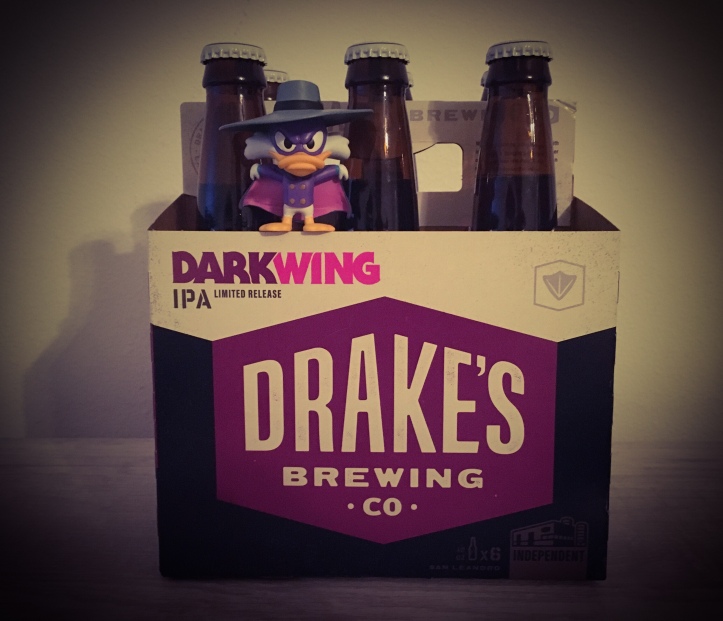 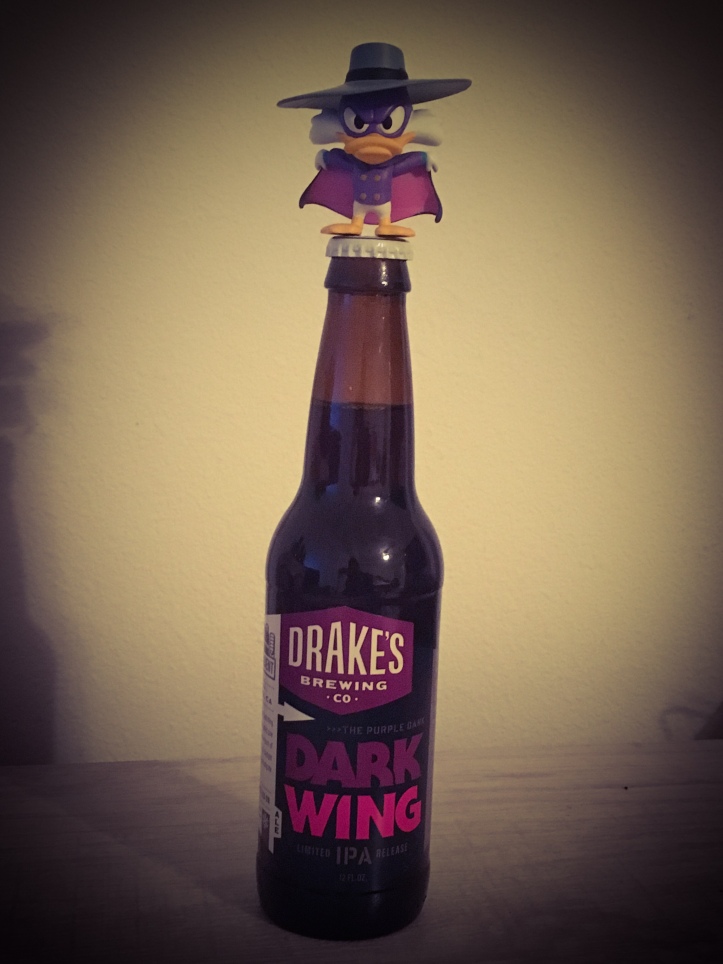 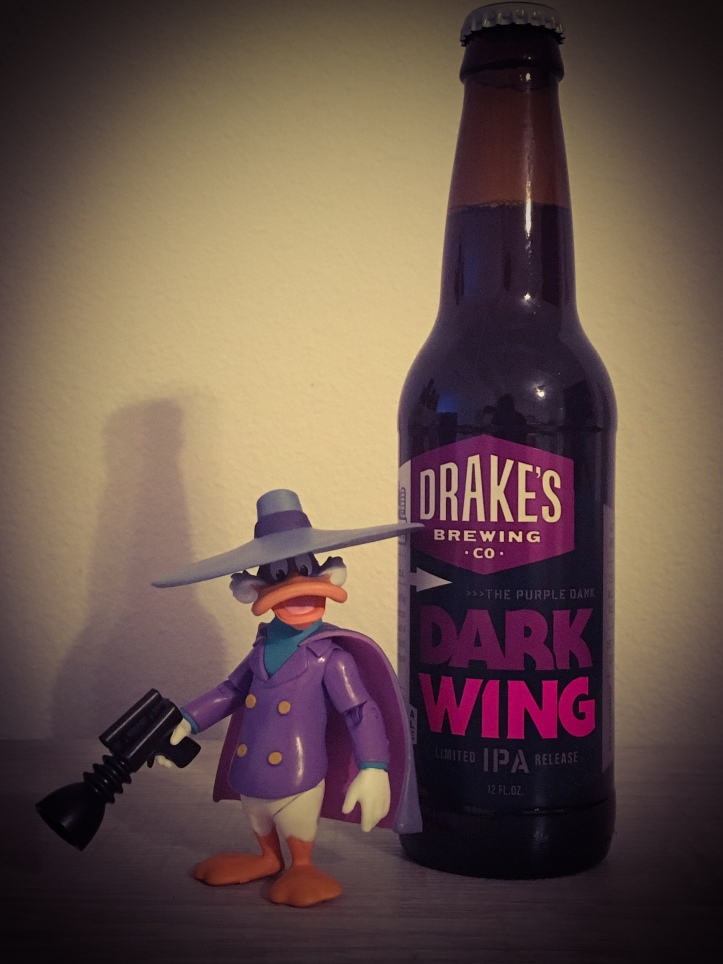 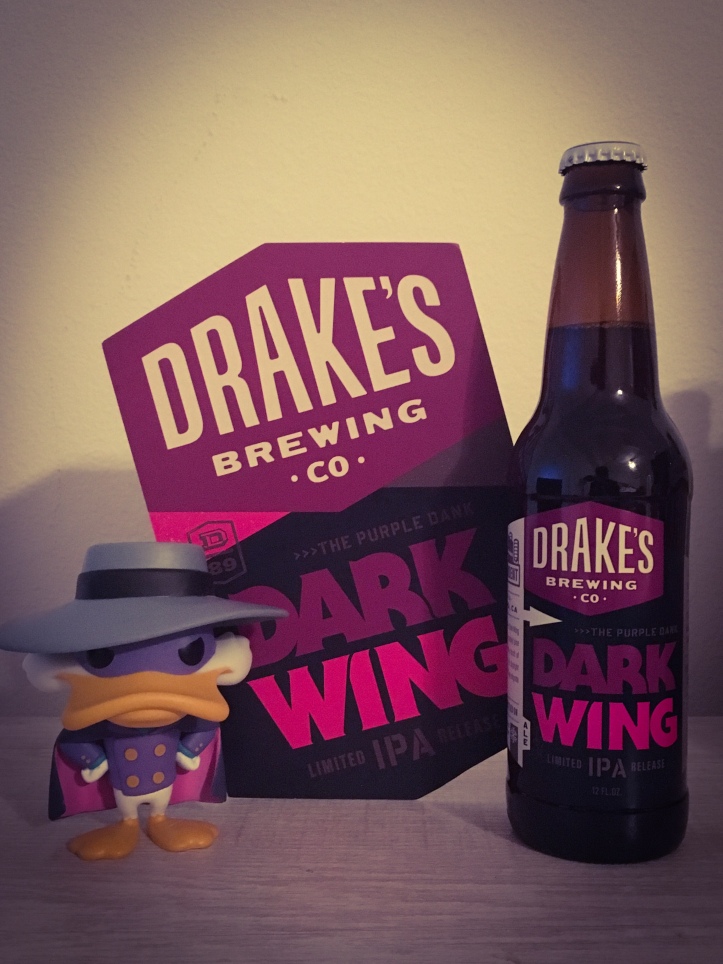 Thank you again to Drake’s Brewing Co. and Brian for allowing us to sample this delicious beverage.

The beer for sure gets a 10/10 grade for pure deliciousness and the generous 7.5% BPA.

Have a great weekend!