Continuing the two storylines per episode formula, “Storkules In Duckburg!” invites views to witness the rise and fall of Louie Inc. and the budding roommate relationship of Donald and Storkules. To be fair, I’m not sure the episode indicates whether either of these subject will continue beyond this episode. Did Louie learn his lesson? Will his aspirations to run his own start-up continue or will he embrace the possibilities of working for his uncle as an unpaid intern? Additionally, it’s unclear if Storkules renting a room in Donald’s houseboat was temporary or if he will be living in Duckburg moving forward.

Season 2 of DuckTales continues to delight fans with action and adventure this season. There does seem to be a lot less mystery (unless you count the fact that we still haven’t seen Della since the final scene of “The Shadow War!”). The episode, like all of DuckTales episodes, perfectly balances humor with action.

Storkules returns to DuckTales is a hilarious manner. Scrooge points out that Donald is capitalizing on Duckburg’s housing shortage by renting out a spare room in his houseboat. Donald is traumatized when he realizes he has rented the room out to Storkules. When we last saw Storkules in “The Spear of Selene!” it was clear that Donald preferred to keep his distance from his biggest fan. Before we leave the duo we learn that Storkules is in Duckburg to evade harpies which his father, Zeus, sent to plague Storkules until he acted like a responsible adult… because Zeus is a responsible adult. 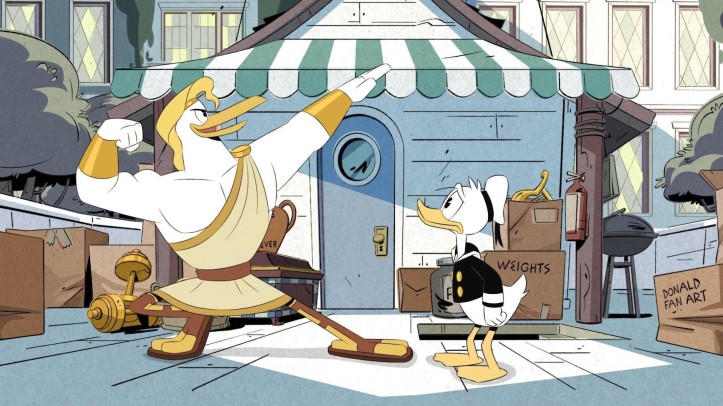 Meanwhile, Louie meets with his employees (family) to brainstorm business ideas. He dismisses all of their ideas until a run in with Storkules fighting Harpies while on a corporate retreat to Funso’s Fun Zone inspires him. Louie hires Storkules and they begin cleaning up Duckburg.

The team make a fortune ridding Duckburg of harpies, but they very quickly run out of work when they capture the last one. Louie considers releasing the harpies to keep the business going, and he even convinces Storkules that it might be for the greater good (of the company). The episode contains some pretty heavy lessons on supply and demand and even business ethics. Especially once the viewer realizes that Harp.B.Gone because a success eliminating the threat that it’s employee, Storkules, brought to the city.

In the end Louie learns a valuable lesson and we learn that Scrooge is the greatest businessman of all time.

The designs and animation in this episode were as always amazing. Funso’s was one of my favorite locations of last season, and I was glad to see the kids return. The harpies were a good mix of the classic villains with a new twist in their design. 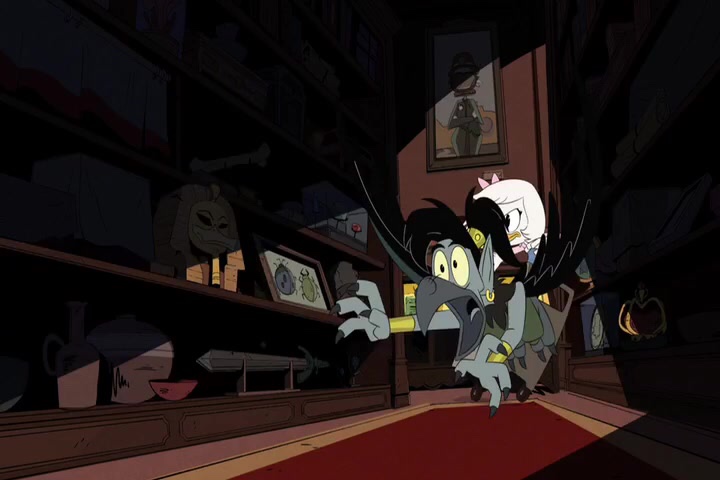 One of my favorite segments of the episode was when Harp.B.Gone gets an action montage that reminded me of Ghostbusters. Second to that was the destruction of Donald’s bathroom by Storkules.I think the episode just works, and it had me rolling. Next week (because this review is so late) we get to enjoy a fun twist and nod to Mickey’s A Christmas Carol in the latest episode of DuckTales “Last Christmas!”