It’s Friday! We are patiently waiting for tomorrow’s episode of DuckTales, and like clock work information about next week’s episode is out!

Hopefully we learn more about Louie’s new business venture this week, but we will for sure learn more next week!

Next week’s episode is titled “Storkules In Duckburg!” The adventures starts Saturday November 17th at 7:30 am. You can check out the episode description and image below.

Storkules’s introduction was one of many high points of the series first season. Any episode including the character will be full of heroic laughs. 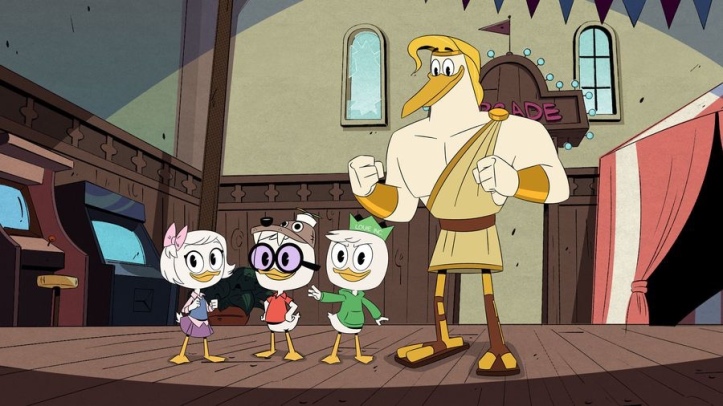 The image released by Disney this week also excites us. It appears at least part of the episode will see the characters return to Funso’s Fun Zone (Where the fun is in the zone). It also appears that Huey is wearing some stylish glasses and a Funso’s cap. Additionally, Louie is wearing a green crown with the words “Louie Inc” on it.

I know we have the 3Cabs this week, but what do you think about the Storkules episode? What do you believe will bring Storkules to Duckburg? Join the conversation below or on Twitter @DuckTalks